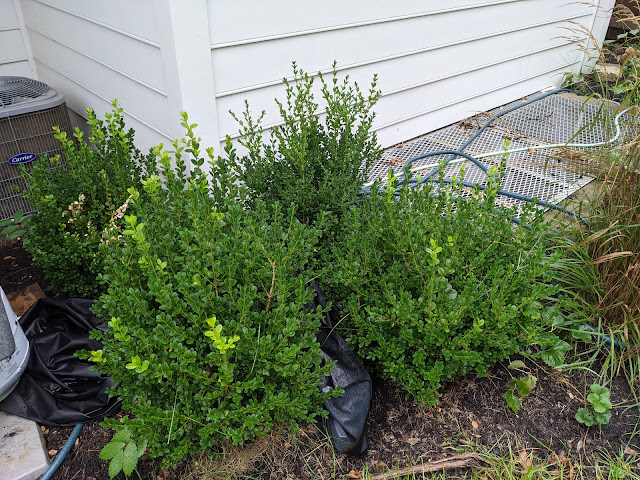 The last time I posted a photo in the garden diary of these four boxwoods was 11 months ago in October of 2019 when I showed off some new growth from the season.  The photo above shows even more growth this year as they've started to fill in the gaps.  I planted these in Fall of 2017 and they were small.  I shaped them in Spring of 2019 - which was the last time they had a haircut.  And that's because I found this boxwood hedge at the entrance to Fedex's Worldwide Headquarters campus down in Memphis where they have an amazing, wavy block of boxwoods.

I don't own hedge trimmers, but Martha Stewart has been pushing these battery-operated handheld ones from Stihl.

@stihlusa @stihl makes this little super battery powerful tool for giving haircuts to overgrown soft patches like lawn edges, herbs, lettuces, even spinach and mache. And change the blade and it trims woody shrubs like boxwood and privet. Versatile. Useful. Excellent. Affordable. The kind of tool I love!

They're available at Ace Hardware, (Reminder:  I don't do affiliate links, so that's just a link directly to the product) so maybe it's something I'll put on my Christmas list or pick up next Spring.  I'm thinking that I should start to put a little haircut on them to assist in filling out the gaps between them.   I'm thinking I can begin to shape them up and down with curved tops to start to see that wavy look like they have at Fedex.  Oh, and I can use them on the Yew Hedge in the far back that threw off the first berry arils this season.