This year's snow totals were pretty high - in particular the month of February.  I posted a photo showing the big pile in between our driveways and mentioned how many thing had gotten buried under the snow.  In most cases, I figured that being buried was going to be fine.  But, there are some instances when the splaying from the weight of snow caused some concern.  In particular, the Gold Cone Junipers - which have a history of splaying - and the boxwoods.

For the Gold Cone Junipers, once the snow melts, I'll get out there and see what the state of them is after the long, hard winter.  I un-wired them, so I'm concerned about the snow.  Here's a look at the boxwoods just about a year ago showing that they had seen some winter burn, but no branching issues.  And, in particular, the boxwood closest to the front walk had a pretty large gap starting to show up that I'm concerned will only get worse with Winter splaying.

As for the front Boxwoods, they were showing signs of splaying with just a few tips peeking out of the snow mounds.  So, I grabbed my rake and started to try to take some of the weight off of the limbs.  After about ten minutes of work, here's what they look like: 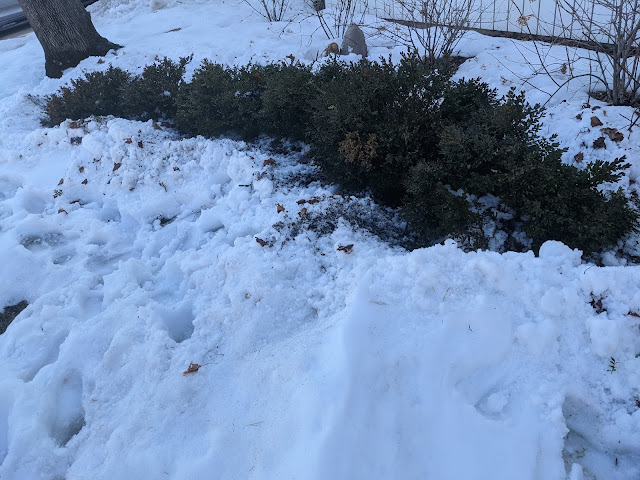 There are some spots where the shrubs need to recover, but overall, once I removed the snow, the limbs seem to lift up a little bit.  I think that with even more time (and snow/ice melt), I'll know the true nature of these boxwoods, but I'm hoping that we'll see a full recovery.

I went out a day later - and at a different time of day - to try to document some of the Winter burn.  Here's what they look like one day post digging out: 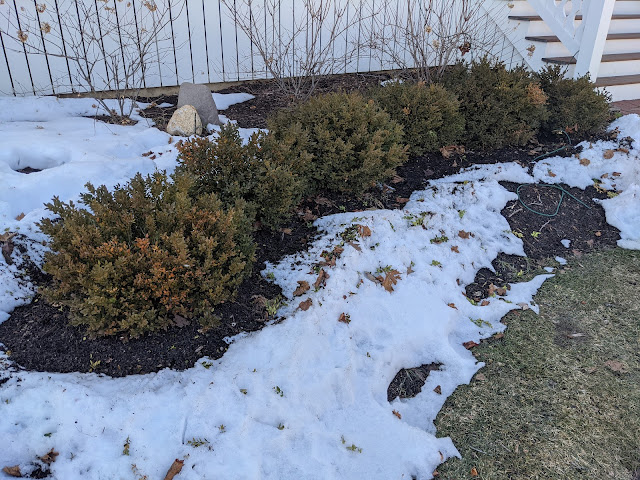 Compared with last year (February 2020), it looks like the snow may have protected these from the deep freeze as they're showing a little less Winter Burn than last year.  At least to my eye.  What do you see?
boxwoods front yard garden diary shrubs snow snow damage splaying winter damage
Location: Downers Grove, IL, USA