Last year, I added five Guacamole hostas to our backyard - three larger ones, two smaller ones.  In two different spots.  The plan that we're working from calls for Guacamole hostas in a couple of different spots including in what I've called "Priority Area #2" for 2021 - this woodland garden section.  Here's a look at part of that section that highlights the hostas.  Green = what I planted last year.  Yellow = what is remaining. 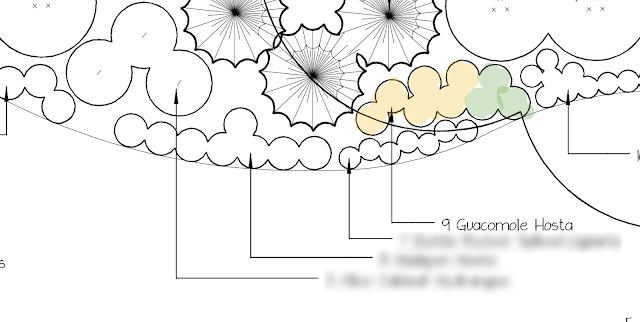 In terms of cultivar, Guacamole Hostas have a lovely color that resembles...you guessed it...guacamole. It has margins on it and is a two-toned green.
And, 'tis the season for impulse buys, right?  Well, Nat was at Costco recently where they're selling packages of perennials like hostas and other-what-have-yous and, well, I couldn't help myself.  She sent some photos and I ended up pulling the trigger on a different variety that I think will complement the trio of Guacamole hostas.
Say hello to Frances Williams Hostas. 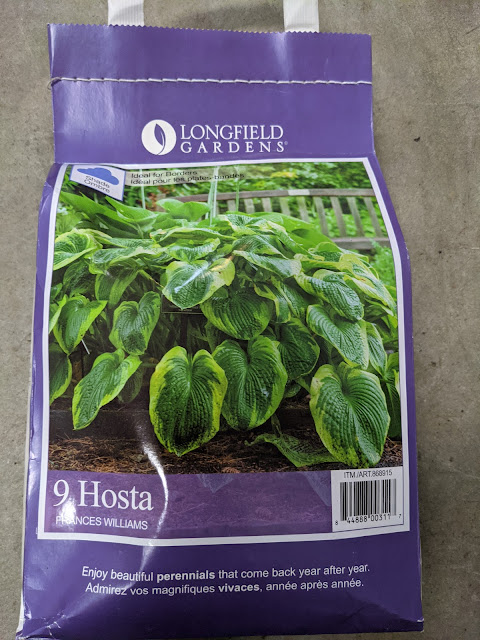 I've bought these packages of hostas over the years and have mixed results.  First of all, this route isn't for people with lack of patience.  Because, when we're buying a package of nine hostas for less than ten bucks, we're playing A.LONG.GAME.  I'll plant this this season, some won't make it.  But, they'll all be very small.  Next year?  We might lose a few more.  But, they'll be a bit bigger.  But, by the Summer of 2023?  They'll be mature and ready for primetime.
If you look at the plan above, you'll see that I'm putting these kind of 'behind' the larger Guacamole ones that are already in the ground.  That will (hopefully) give me some *looks* now, and allow these to catch up over time.
That accounts for six of the nine in the package.  What about the other three?
There's another spot where I planted two additional Guacamole Hostas last year - back by the London Plane Tree.  That spot in the plan calls for four hostas.  Here, you can see the situation below.  Green = what's there currently.  Gold = what I need to plant. 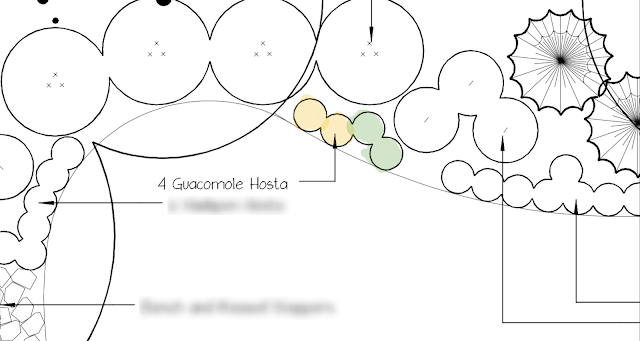 So, this gets me two more and up to eight. What to do with the last one?  Knowing that not all of these may make it, I could simply over-plant one of these sections with the extra hosta.  Or, I can add it to the hosta section I've made under the Oak tree.  Or just pop it on the north side of the house/screened porch knowing I'll just leave it alone for a while.  Or add it to the ones I transplanted under the espalier Lindens last season?

The package recommends 36" distance between plantings - which is always a challenge for me as a gardener.  I pack things way too close together.  But, will take the note and try to remember as I plant in the coming days/weeks. 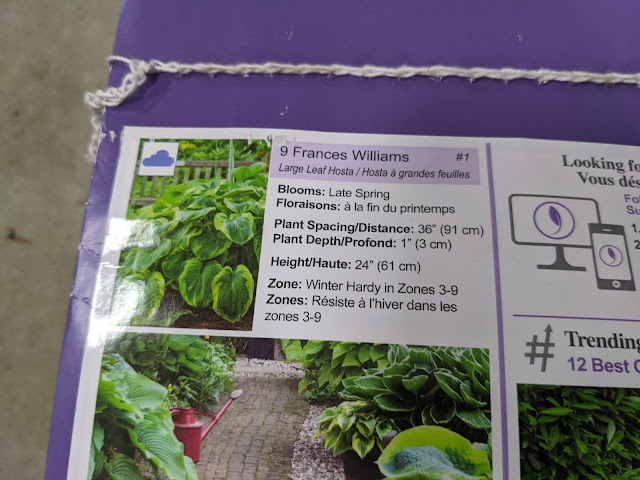