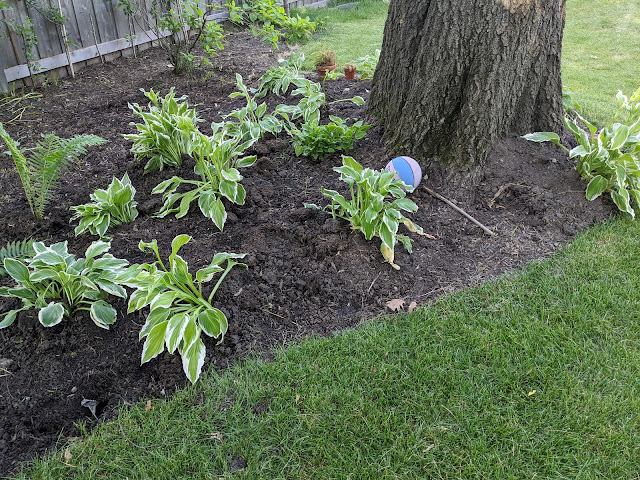 My #2 priority area in our backyard for this gardening season is around the large Oak tree that is home to our tree swing.  That part of the plan called for adding a series of hostas, ferns and connecting the beds between the Hornbeams and this nascent bed.  The plan called for the addition of 10 or so Hadspen blue hostas, but there were two factors that made me go a different direction.

First, I planted three hostas in this area already.  First, there are two, existing variegated ones present:  Christmas Tree and Fantabulous from 2018.  Second, there was a third, variegated hosta that I tucked behind the tree - the miniature variety that I really like.  And finally....I had a mixed variety of Hostas that I've tucked underneath the Hornbeams over the years - including mixed variegated ones with more blue ones.  So, I decided to get the variegated ones out from below the Hornbeams.  And move them to where you can see in the photo at the top.

Below, you can see all the new ones in - in red - along with the existing miniature hosta in the blue circle. There are now 12 variegated hostas in this area - which the plan calls for and are bordered by some of the Ostrich Ferns - that I posted about here - on the far right side of the photo.   More on those ferns - and how many of them - tomorrow. 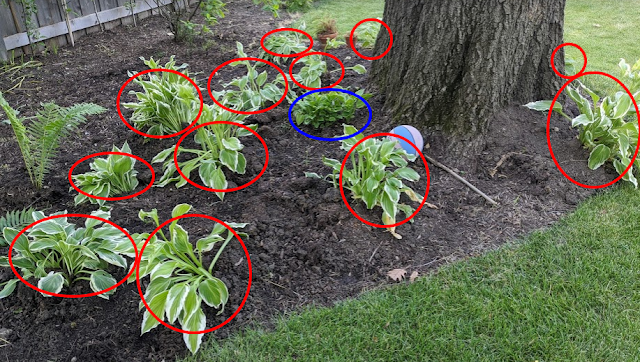 The last few touches on this area include adding some yellow Bottle Rocket Spiked Liguria, dividing up some of the blue hostas and transplanting them under the Hornbeams, a few more ferns tucked in - and maybe a different variety, and a Viburnum or two along the fence.
2020 to-do list garden diary Hostas landscape plan landscape priority shade gardening transplanting tree swing variegated hostas
Location: Downers Grove, IL, USA