I had four bonsai-related items on my 2021 to-do list for the yard and garden.  One of them - Number 10 -  was to buy some pre-bonsai materials that I can purchase as smaller stock (and thus, lower prices) to use in later seasons.  Number 10 on the list reads:

I currently have three pre-bonsai junipers that I've picked up over the years - two in the ground and one in a larger container.  My plan for this year - #8 on the list - is to 'work' those three this season.  That means digging them up, pruning them a bit and likely sticking them back in the ground to overwinter in their pots at the end of the season.

But, this post isn't about those old pre-bonsai trees.  Nope.  It is about marking the addition of a new pre-bonsai tree:  a Bird's Nest Spruce.  You can see it below in the photo.  I picked it up for $10 from Home Depot in this 1# nursery container. 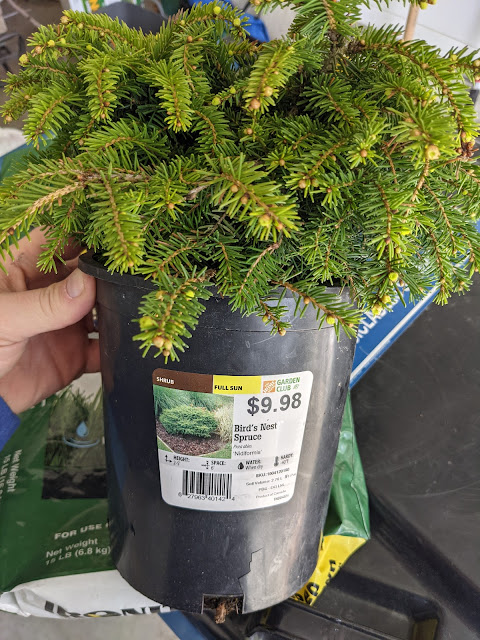 My plan for this year is to (for now) just dig it into the ground in the container.  Then, when I get around to 'working' the other three, I'll do the same with this one - likely working to expose the bottom of the trunk and pruning out a few of the limbs.