Yesterday, I posted a photo and talked about this 'unknown Juniper' that is in a large container on our patio.  In that post, I mentioned the other two Junipers that I have in the ground - Youngstown and Chinese.  I bought them as small $5 nursery stock from Home Depot and at kept them around the patio all season while I tried (it was hard) to NOT prune them too much.  My goal is to work them into tree-form as I learn (just a little bit) about bonsai.   I've documented my "bonsai journey" over the past few years on the blog and you can find those posts here.  I've learned (and killed) from one tree and have tried to be patient.

At the end of the season, I read that it is smart to dig them into the ground to overwinter them in their containers (people do this with all sorts of bonsai pots).  So, that's what I did:  dug up a couple of holes, stuck the junipers - pots and all - directly in the ground, covered them and tried to mulch them in with leaves. Well...I was lazy and just simply left them in the ground this year.

Here, below, is a of photo showing these two: 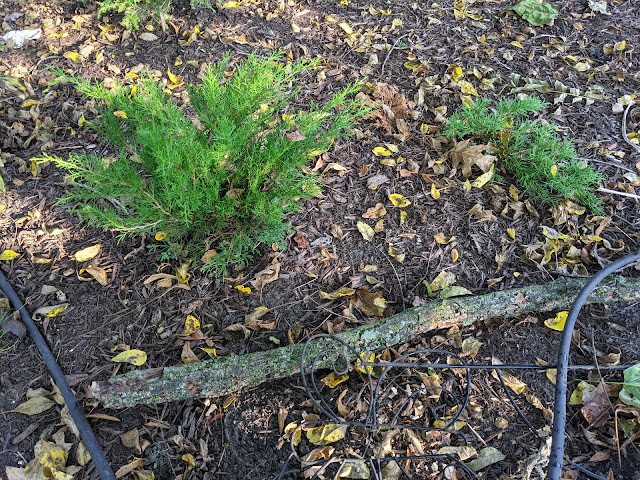 One of them is doing better than the other.  On the right, the one that isn't doing as well is the Chinese Juniper - 'Pfitzeriana Aurea'.  If you look closely at the photo, you can see this Juniper is really in two parts - the green 'clump' that you see.  And immediately up and to the left is a brown, dead set of needles that didn't make it.  Maybe I planted it too low in the ground?
On the left is the Youngstown Juniper - 'Juniperus Horizontalis' that is doing better.  This cultivar only gets about a foot tall, but spreads out like 4-5' wide.  So, it felt like a good opportunity to work a miniature juniper tree version by focusing growth on the trunk.  I've left this one alone mostly with the goal of thickening up the trunk.  Based on my initial post from May of 2019, I mentioned that it had a nice trunk, "decent root flare" (ha.  Like I know, right?) and no reverse-taper.
Below is another photo showing both of these as they stand right now - in early October in the garden diary. 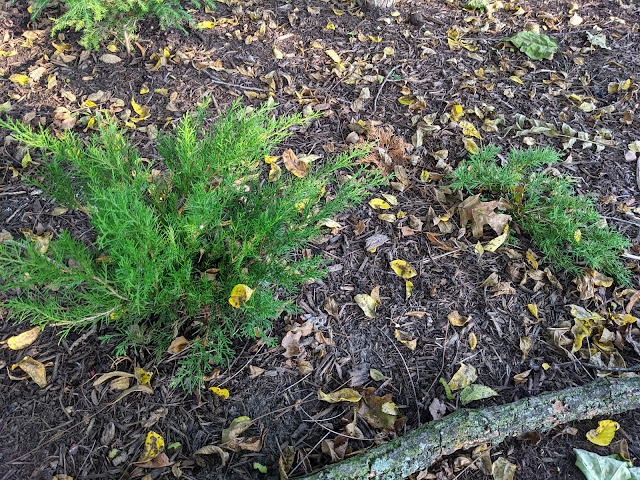 One note for myself...one of the happier (but still tiny) Canadian Hemlock trees can be seen in the VERY top left of the photo above.
My plan is to - once again - overwinter these in the ground right where they are.  These benefited from being mulched earlier this Spring and just looking at the photos here, the mulch has held up.  But, I'll soon give them an extra layer of protection with a layer of wood chips that I've been getting from the Village "mulch pit" in the past few weeks.  Before the frost hits too hard (which will be very soon I'm thinking), I'll lay down that protective coat on these and the "unknown" juniper that is also being prepped for bonsai in the large patio container.
backyard bonsai Bonsai Journey bonsai juniper Conifer Bonsai conifers garden diary mulch beds overwintering
Location: Downers Grove, IL, USA