We lived on Indiana Street in Elmhurst for almost ten years.  In two houses.  One of our own.  And one of Equation Boy/Man and my Sister Vic's.  Our last few years there, we lived next to a couple named Wes and Susie (hmmm...maybe Suzy?  Or Suzie? Who knows...I never asked how to spell it) who were good neighbors.  They had a hot tub and some nice Japanese Maple trees.  Wes was an artist who loved dogs and liked our little puppy (at the time) Lizzie.

One of them spent time in the garden.  (see Japanese Maples)

And they had a front parking spot (not quite a driveway because they used the alley behind the house and had a garage back there) that was lined with Bearded Irises.  They always put on a nice show.

Fast forward to this Spring and Wes and Susie have moved out and someone is tearing down the house to build something new.  My Sister Vic was able to grab some of those Bearded Irises from the front and save them before the bulldozers arrived.  The Japanese Maples didn't make it.  Neither did the big contorted tree they had in back.  Nor the pines.  But, a little slice of flowers from the front did make it.

I was over there for a birthday party for my niece and Vic offered me some of her "Indiana Street Irises".  Of course, I grabbed them.  And where did I put them?  On the south side of the house where I put things that I don't have a home for immediately.  Here, below, is a shot of this clump of Wes's Irises: 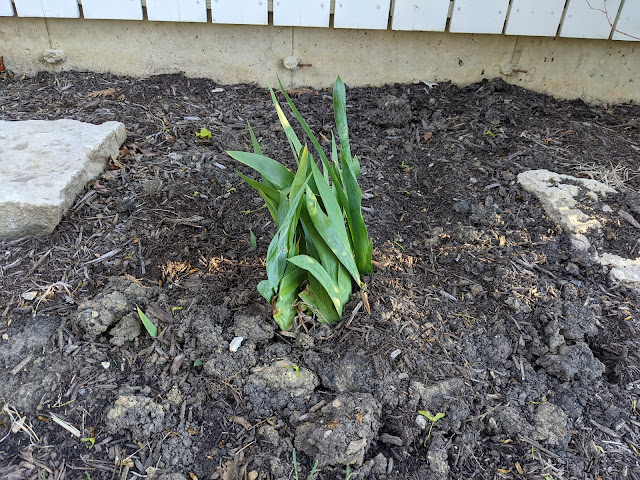 These will get mulched in and then I'll mostly forget about them for the season.  I'm doubtful that they'll bloom this year with all the transplant stress.  They were dug out and lived in a clump for close to a month before I planted them.

In terms of specific location, you can see the front porch vertical slats in the photo - these are planted in between where the gutter downspout comes down and where the pop-up and little rock garden is located.

I've transplanted Irises before (from my sister-in-law's yard) but they didn't take.  Hoping these will do better.