Last Summer, I planted a series of seven Alice Oakleaf Hydrangeas.  Two dwarf versions and five normal ones.  These were contemplated as part of our existing landscape plan and I planted them along the fence on the southside in the bed closest to the kitchen nook window.

Alice Oakleaf Hydrangeas are officially named Hydrangea quercifolia 'Alice' (thanks Roy Diblik) is described by NC State Extension office as a shrub that puts on a white flower show that fade to pink.  From their post:

Oakleaf Hydrangea 'Alice' is an erect rounded decidous shrub with showy white flowers that appear in early to mid-summer. As the flowers age they fade to pink. This shrub will reach a height of 5 to 8 feet tall and wide at maturity. Plant 'Alice' in the full sun to partial shade in moist well-drained soil. Mulch this plant in the summer to conserve soil moisture.


Like all hydrangeas, it needs to be pruned immediately after flowering as flower buds are produced on second year wood.

The photo below shows their current state. Five of the seven are flowering - the two larger ones on the right in bloom - and some of them have started to turn pink. 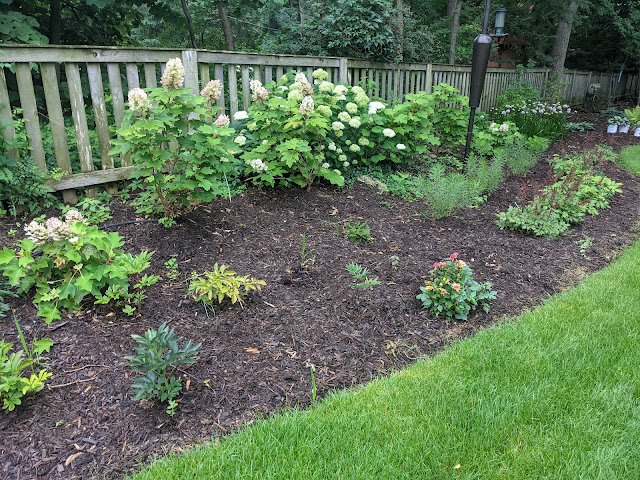 Thinking about them being in the ground just a year and having had to deal with some transplant shock this year, I'm really happy with their size.  That note about pruning as soon as they flower is something I'm going to try to work on this year.  They are a little leggy - without a ton of growth near the bottom - so I'm thinking they can use a little bit of pruning to let them focus down trunk.
There's one more thing:  I mentioned planting seven last year.  There are only six here.  I ended up moving one of them over to the Priority Area #2 - which calls for three Oakleaf Hydrangeas (the label was cut off from the screenshot I posted here).
backyard flowers garden diary hydrangeas landscape beds landscape priority oakleaf hydrangeas perennials pink flowers shade gardening shrubs
Location: Downers Grove, IL, USA