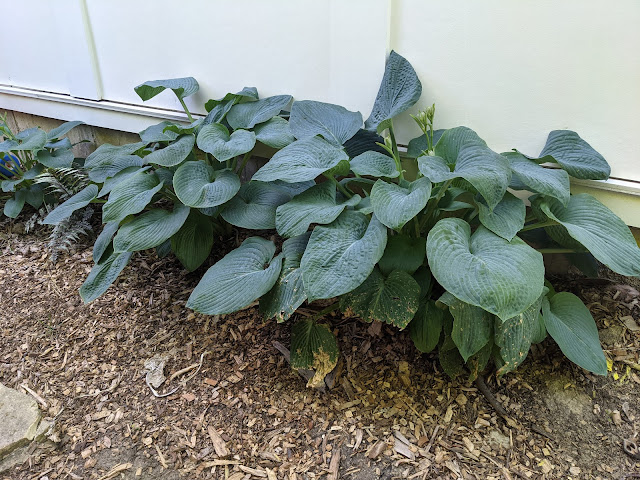 Just yesterday, I posted a couple of photos of some newly emerged Frances Williams Hostas that I planted as tiny bare root plants from Costco. When I was out there taking photos of those new plants, I remembered that I had previously planted some bare root hostas - and wondered what their growth trajectory looked like.  So, I went over to the north side of the screened porch and found a grouping of three of the Bressingham Blue hostas that I planted as bare root plants in Spring 2018.

That means that what you see in the photo above - a trio of Bressingham Blue hostas - grew like this:

2020 - Third growing season.  I included a photo of these in a post in June 2020. Note, the tops of the foliage reached the line where the foundation hits the house.

2021 - Fourth growing season.  Photo above.  You can see that they've grown in height and width.  And (in this photo) are starting to produce their flowers.  The one on the far right is smaller than the other two and the Japanese Painted Fern that is in between them is starting to get crowded out.  I'm thinking that these hostas can get split this Fall.

Note:  I'm posting this in early July, but this photo was take in mid-June.