I added a Cascade Hops vine (Humulus lupulus) to our backyard earlier this Summer when I bought what seemed like a very mature (root bound) 1# nursery container at the nursery.  I had an existing (small) trellis and figured that I didn't need anything more significant this year.  That plant had a rough transition and suffered from some transplant stress because I beat up the roots pretty good.  But, it recovered by July and started to grow up and out.

So, imagine my delight when I went out to the garden this week and saw that that this vine had fruited and we have some hops in this - our first growing season. 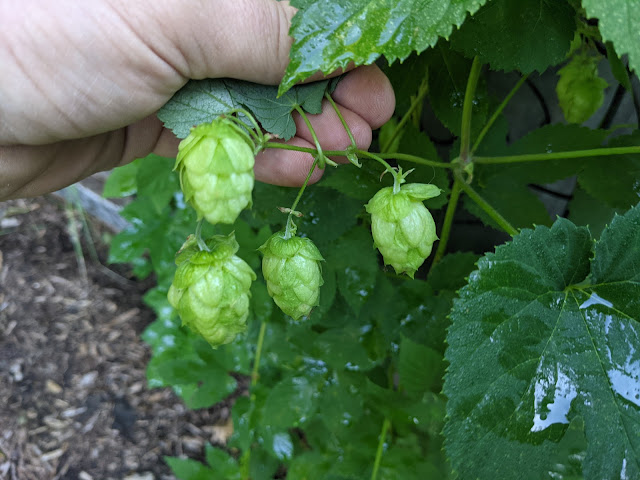 Why am I surprised?
I've grown hops before.  Back in 2012, I planted a similar sport of hops vine - Golden (vs Cascade this time) back in Elmhurst.  And, according to this 2013 post, it didn't produce any fruit that first year.

It took the third growing season to produce fruit.

I'm thinking that the vine that I brought home was mature.  And, due to COVID, it sat around on the bench at the nursery for at least an extra year.  Thus, I likely benefited from that 'growing season' happening in the container.

Having hops is a wonderful treat for me this year.  But, I now have to figure out how to trellis it up in meaningful way.  Something to put on my 2022 to-do list, I guess.