It seems that September is when we get a big flush of growth on our front yard Bald Cypress tree.  This year is the second year in a row when I've been able to catch (and document) the new, happy feather-like needles that show up in a big, late-Summer blow-up.  Here's last year's post on the same subject.  The last time I posted a photo was from July when this tree had new Summer-time growth.

Here - below - is a look at the big, feathery "pom-poms" of growth that are currently sitting on a bunch of the limbs and branches.   I used "pom-poms" because they are sort of little balls of growth on the edges that remind me of pom-poms. 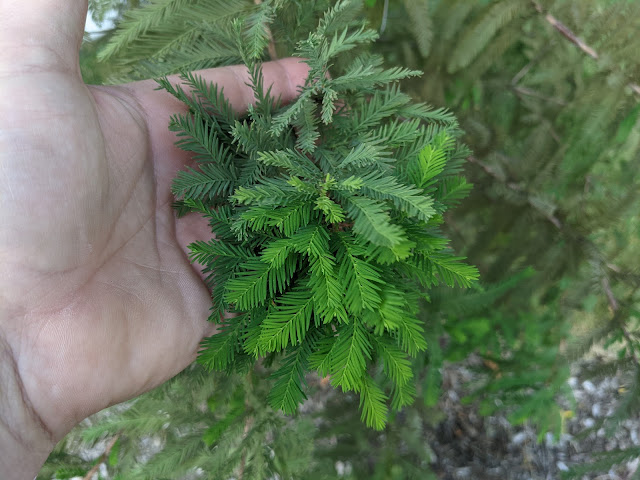 And, here below, is a look at the full tree.  It has really grown big and strong this season and comes in close to eight or nine feet tall by my eyeball. 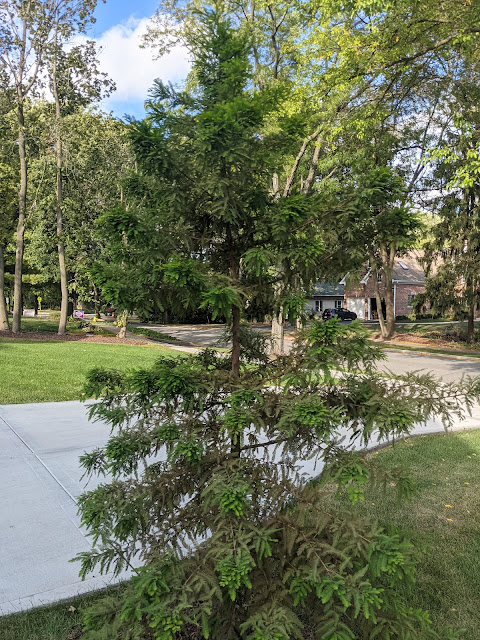 I haven't measured the caliper of the trunk, but it is sizable - and way up compared to what I measured 18 months ago when it was less than 1.25".  I'll get the caliper tool out soon to confirm, but with this tree being planted pretty close to the property line (the driveway you see above is new, so this planting wasn't close to a driveway when it went in), I'm pretty sure this tree is the beneficiary of my neighbor's irrigation system.  Quite a few of our other trees and shrubs suffered from the drought, but this one didn't...and the next-door irrigation system running all Summer - is my only explanation.   *Something* is driving the growth, that's for sure.
This tree was tiny when it went in the ground in September of 2018.
It has had three growing seasons ('19, '20 and now '21), so this seems to prove up the Sleep - Creep - Leap process as we're seeing a HUGE LEAP this year.
At some point, we'll have to think about limb'ing it up to get the tree limbs and branches up/over the driveways, but I think that can wait for a couple of seasons.  In the meantime, I'll just try to prune back the length of the lower branches to keep them from overlapping with the driveways.
Bald Cypress deciduous conifers fall growth front yard trees garden diary ib2dw irrigation new growth tree diary trees
Location: Downers Grove, IL, USA