Putting a photo of the large Red Oak tree - the tree swing tree - in the garden diary here to show a little look at the Fall show that the tree is putting on during the first week in November.  You can see in the photo below that the tree is a mix of green and yellow and has held much of the leaves still on the limbs this late in the season - which is typical for this tree and Oaks in general.

I posted a similar photo a year ago - in early November - where the same tree had already lost many of the leaves for the season. 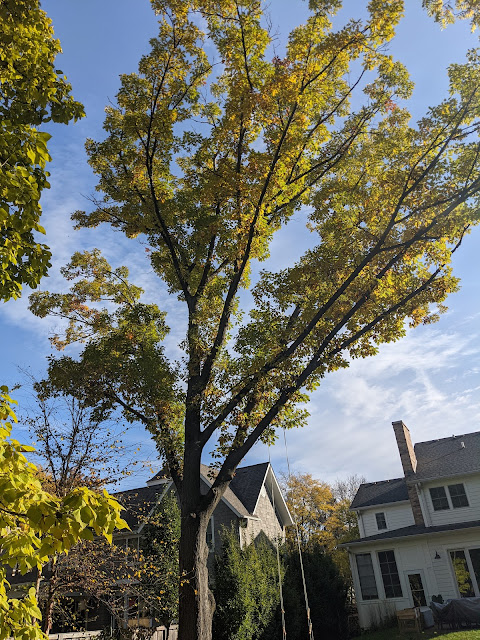 For tracking in the [tree diary], I noted that both of our large, mature Red Oak trees had dropped ALL of their leaves by mid/late November last year.  Will be tracking if foliar marcescence will persist this year like it did in 2019.  Here's a photo all the way into December when this tree had leaves clinging to the branches.

An additional note about this tree - it didn't produce any acorns this season.  Or, at least, it hasn't dropped any acorns this year.  Same thing last year.  The previous year - in 2019 - it was a mast year.  Dropped thousands of acorns.

We began to treat this tree last year - for pests (Two-lined Chestnut border), feeding them (fertilizer) and a growth regulator (to help the tree grow a stronger root system).  And, the results have been good so far.   This year, they've treated it (again) for the borer.  But, still waiting on feeding.  I'll post an update on the full course of treatment from Davey in the coming weeks.

This is part of the [fall show] series from the past few days.  Full archive of [fall show] posts here.