This photo (below) shows off the buds that have formed (lateral buds) on our Dawn Redwood tree.  This is the tree that I monitor the MOSTLY closely through all four seasons in the garden.  It is, by far, my FAVORITE tree.  It was one (originally) that we planted with the kids on Earth Day and was the first tree we put in.  It had to be replaced, but in spirit...I consider this the same tree.

Each Spring, I watch this tree and how the buds are ready to open - while I hold my breath - that the tree has survived ANOTHER winter.  This year, it opened up - what I THOUGHT was VERY late (April), but in doing a little research of past years, it was right on time.

The tree is covered with lateral buds on all of the very thin limbs - you can see a run of them below: 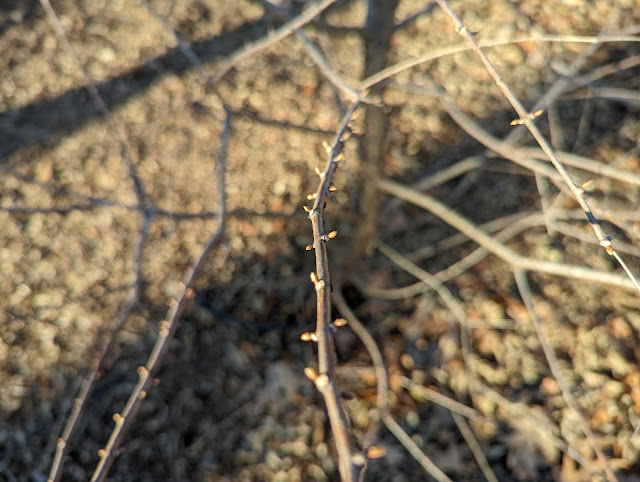 I suppose I should revisit that guide from UW-Stevens Point that walks us through the Winter buds.  These are opposite buds, aren't they?  The photo makes it look like they're NOT perfectly lined up, but they're NOT alternate buds, are they? This piece from the College of DuPage (hey!  Local guys!) describe the Dawn Redwood as having opposite and sub-opposite buds.  From COD:

Looking at my photo...the buds (opposite...confirmed) are pretty close to the branch.  Are those spur branches?  I don't think so.  I think the buds probably need some clarification here:  these are needles, aren't they?  Deciduous conifer and all? But, those don't appear to be spur branches, but rather just opposite needle buds attached directly to the branch.

1. The tiny Ginko Biloba tree set buds, but I'm unsure if it will survive.
2. Our small Harry Lauder Walkingstick tree has green, egg-shaped terminal buds.
3. One of our London Planetrees - the largest - has red, pointy buds that were set late this Fall.
4. My favorite tree in our yard - the Dawn Redwood - has opposite needle buds that are brown and pointy at the end with what looks a 'wrapped' look.