We're now five full growing seasons in with our pair of Greenspire Linden trees (Tilia cordata 'Greenspire') that we've espaliered into a four-tier horizontal cordon.  Planted in 2017, I initially went one way with the layout of the branches (at one time, I had six tiers and was even planning on shaping it into a candelabra form), but last Spring (2020), I finally had a cogent thought (after looking at these trees for years) and made a call to prune A LOT back and go with a simple, four-tiered horizontal cordon.  In the Summer of 2020, I got busy pruning things back and because I was SCARED to really go for it, I ended up leaving a few little branch 'nubs'1 with some growth on them just to make sure I wasn't pruning off TOO MUCH of the tree at once.  You can go look at this photo here and you'll see the little orange things that I left (at the time).

With all the leaves dropped from these trees, I can start to look at the form they've created and begin to appreciate how far they've come.  Yet also realize...how far they *still* have to go.  Below, is a photo of what the Lindens look like right now.  For the first time, I don't have to annotate the photo with arrows that show where the tiers are - as most of the branches have grown in enough to be visible to the eye. 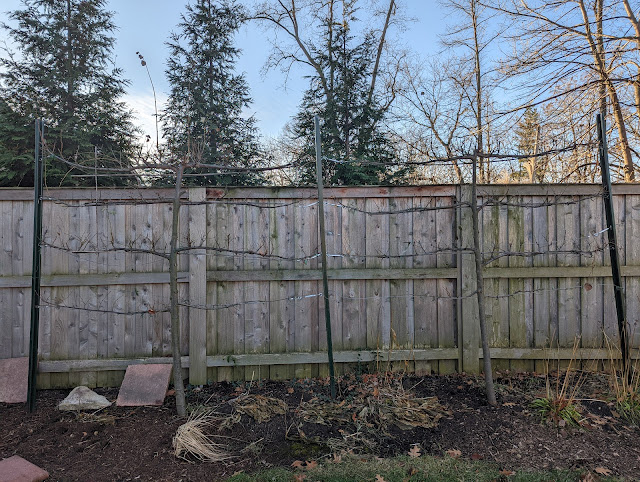 The tree on the left has a very strong top tier.  And 2nd from top and 3rd from top tier are both extended to the edges of the frame.  They've thickened up, but are not as thick as the top tier.  There is a (new) apical meristem that you can see standing proud that needs to be pruned back.  I've battled this top tier all Summer as the natural behavior of these trees is to grow UP.  I'll wait for late Winter to prune to avoid frost damage.  The bottom tier has extended on the left to the edge of the frame and the branch on the right is close.  But, they're both thin and have a long way to catch up with the other three tiers.  But, this tree is the one with those 'nubs'.  I'll come back to those in a second.
The tree on the right has the same four tiers.  Top tier is thick and proud.  The 2nd and 3rd from top tiers are now reaching the edges, but are thin.  The bottom tier is the far-behind.  The branch extending from the trunk to the left is only about halfway to the edge of the frame.  The branch extending to the right is three-quarters there.  But...both are SUPER thin.  And need to get fatter in order to be free-standing.
I was thinking (earlier this year) that I could MAYBE pull down the framing early next Spring.  All of the tiers are standing straight and the tree is truly two-dimensional.  But, looking at the bottom tiers, I'm thinking one more year might be better?  I'd really like to remove the metal posts and let the tree stand alone. The alternative to the full posts/wiring system is to pull down the frame and just wire up some bamboo to serve as bracing behind the trunk and across the tiers.  Maybe that's something I should put on my 2022 to-do list.
Speaking of that 2022 to-do list...I need to add these 'nubs' to the list.  It is time to lop them off.  Before they get too big and the scar left on the trunk becomes too problematic.  Only the tree on the left has these - you can see them in the photos below.  One is between third and fourth.  The other is between the lower and second tiers.  Both were there to ensure I left some leaves/buds on the tree during a HEAVY prune.  Their time has come. 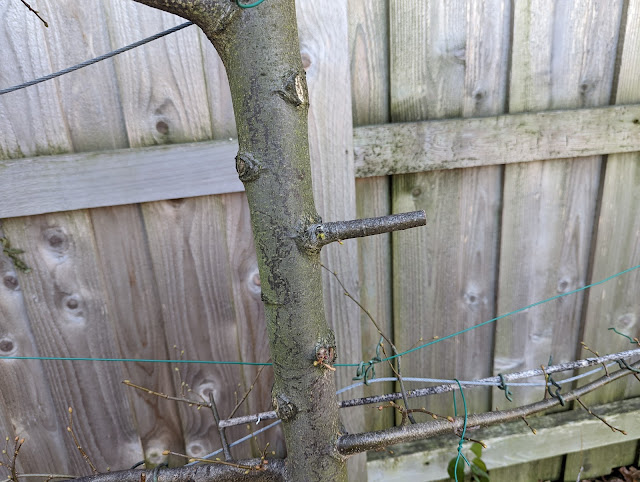