On Friday, I posted a photo of my blue (foliage) grow light that I've set up for some of our houseplants this Winter.  These are all containers that I've kept outside during the Summer (mostly in spots with indirect light) or on our screened porch (that is enclosed) during the edges of the growing season.  One of the containers that I've had for 10 months now is my one-and-only (and first ever) Staghorn Fern.

I bought it - on a whim - from Home Depot for $10 last March.  It came in a nursery pot and despite researching how they're supposed to be *mounted*, I've left it alone.  The last time I showed a photo of the fern was in August of last Summer when it had spent a few months outside on the front porch - in shade.  At that time, I also made a move that I (sort of) consider a compromise between mounting Staghorn Ferns and keeping them in a container. There's plenty of folks who keep them in what I'll call a 'basket'.  My solve to get my container CLOSER to a basket was to take a 3/8th's drill bit and poke a few dozen holes in the sides of the nursery pot.  Circulation, drainage, something more like a basket.

The Staghorn Fern stayed outside until September when it came into the screened porch until earlier in January.  Where it has found a home in my office (under that grow light) for the next few weeks until the weather begins to warm up and it can go back out on the porch in February or March.

The defining characteristic of Staghorn Ferns are their fronds.  That's how they get their name - the tips of the fronds look a bit like antlers.  My fern has been pretty slow-growing, but after these ten months, I am finally seeing some good antler-action.  There are two large fonds that have split tips that you can see below. 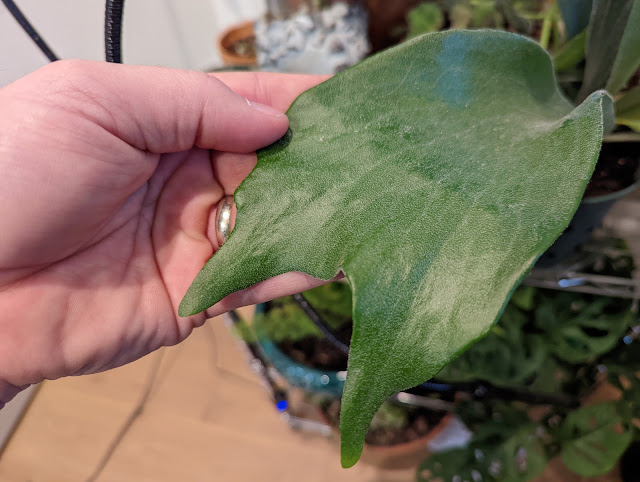 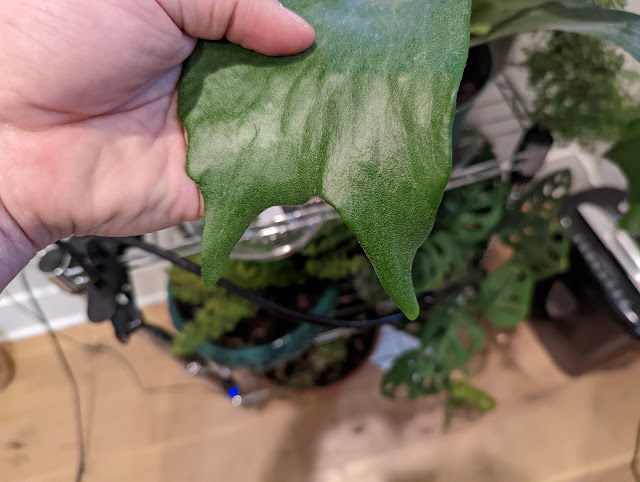 I mentioned about the joy I've found in this Staghorn Fern in my early 2022 look-ahead post and talked about doubling down on house plants (#18).  I think one of the things that I'll try to sort this year is the idea of mounting this Staghorn Fern.  I'm hesitant to do ANYTHING to it right now because it is seemingly happy.  But, knowing that I picked up this one in March has now pushed me to go looking for one in March of this year.  Why?  Because what's better than one Staghorn Fern?  That's right...two Staghorn Ferns.  That way, I can mount one of them and not be too worried.