Posted by Jake Parrillo on March 22, 2021
If you ask me what my favorite plant type is, I'll answer by talking about ferns.  They're my favorite plant type to grow.  When I talk about ferns, I mostly talk about my love for outdoor, perennial ferns.  Ostrich Ferns were my gateway drug.  We have others, now.  Like Japanese Painted ferns.  A Lady Fern that I planted last year.  And a big, happy unknown cultivar "teardown" fern deep in the yard.  We plant Foxtail ferns what seems like every year.

Nat also keeps a big Boston (I think) fern on our front porch during the Summer and we've tried to overwinter it upstairs.  It has lost a LOT of leaves/fronds, but there's still a lot of green, so maybe it will come thru.

I also added an indoor fern this Winter when I bought my first Maidenhair Fern.  What is supposed to be a finicky fern has - so far at least - been ok for me. I keep it pretty well watered and thus far, it hasn't shown much stress.

But, for a few years now, there's been another type of indoor fern that has been rattling around my brain.  And, I'm pretty sure that Martha Stewart is to blame.  It is called a Staghorn Fern.  And, I can't exactly link to/put the time or place from Martha Stewart that showed me my first Staghorn Fern, but I can say that I'm almost certain it was her.

She has stories up about them on her site.  And posts on Insta about them.

I've often thought about having one, but I suppose the occassion or moment never arrived.  Until recently. When I was at Home Depot and - as one does - wandered into the indoor garden center.  And, as I was looking around the tables, I noticed down near the floor - on the shelf under the tables were a couple of staghorn ferns.  Well, to be honest, I wasn't sure what they were.  But, I picked them up.  And, sure enough...the tag told me what it was: 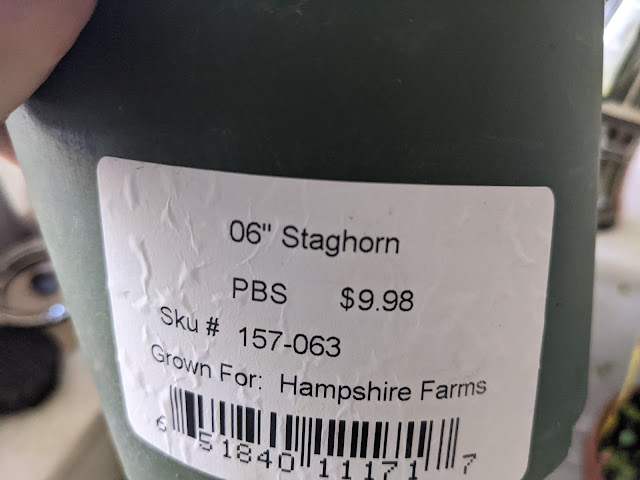 And bring it home.  But, I really know very little about Staghorn Ferns.  That's where that Martha Stewart story comes in.  From her "Staghorn Ferns 101":

Staghorn ferns are epiphytes, which means they are air plants. They gladly grow on a wall mount, which lets air circulate around them. They need good-quality light, even some direct sunlight. They need some drying of the soil or medium in between watering. The back plates and medium need to be thoroughly soaked. They prefer more moisture when growing in the summer.

What the heck.  Air plants?  What I bought was in soil.  And that's how it came home.  Knowing this, I decided to NOT transplant it into a container and just leave it in the plastic nursery pot for now.  Here's how it looks after being home for a couple of days: 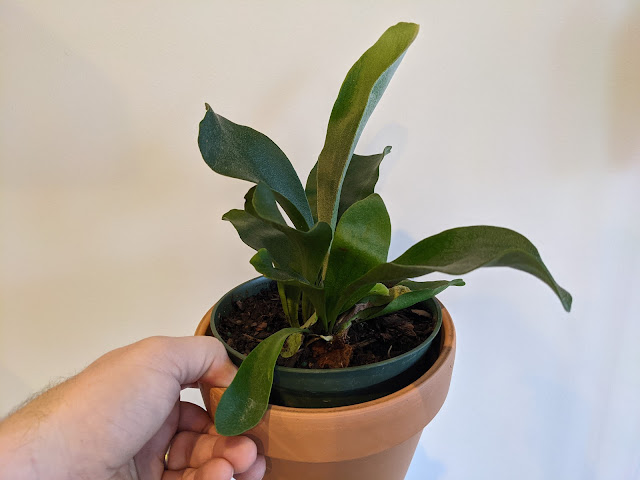 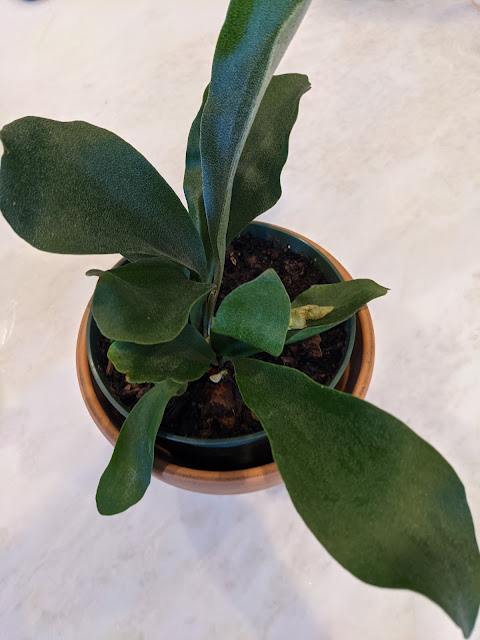 As you can see, it doesn't have those those split at-the-end fronds that a lot of Staghorn ferns show, but in looking around the Web it seems that these guys have multiple types of leaves/fronds.  Some rounded like these and then they grow (what appear to be) separate fronds that take on that antler look.
But about that pot.  It seems that these ferns are often-times 'mounted'.  Here Martha (again) shows the way.  Mounting them seems like a fun project, so perhaps that's something I'll give a shot this Summer.  But, it also appears that leaving it in a container might just be fine, too.  From Gardening Know How:

Wire or mesh baskets are well-suited for growing staghorn ferns, but you actually can grow one in a standard pot. Fill the pot with a loose, well-drained potting mixture: preferably something like shredded pine bark, sphagnum moss or similar. Be sure to repot when the plant gets crowded. Also, remember that it’s easier to overwater in a regular pot because drainage is limited. Water carefully to prevent the plant from becoming waterlogged.

What's that you're thinking?  Same thing I am, right?  That I need to go get a second Staghorn Fern.  So I can try mounting one and keeping the other one in a container.  I also am thinking that I can get these outside later this Summer to enjoy out on the front porch.
container gardening diy projects ferns garden diary home depot indoor gardening martha stewart shade gardening staghorn ferns
Location: Downers Grove, IL, USA