Posted by Jake Parrillo on March 11, 2022
While I can't get started with Spring clean-up just yet, the warm(er) temperatures have me wanting to be outside in the garden working on things that I'd like to get done this season.  One of the projects that has been on my mind since last Summer is thinking about a plan to address the hydrophobic mulch that is present in a few spots - but specifically under the Norway Maple outside of our Front Porch.   I don't think (I can't find) that I've posted specifically about hydrophobic mulch.  And the problem that it creates.  It is something that I'm dealing with in a couple of spots, but as I've gotten to learn more about it, I'm still trying to figure out both what CAUSED it and how to address it.
One of the VERY COMMON reasons for hydrophobic mulch is that it was applied too thickly.  That's true for me.  Especially under the Norway Maple.  I've had a lot of trouble growing under that tree - here's a whole post on the topic - so I'm not totally certain of the cause of that difficulty:  is it due to the shallow roots from the tree?  Seems like it.  But, has hydrophobic mulch been the reason?  Very likely, I think.  How did I get here with mulch that is creating an impenetrable blanket?  Just putting it on too thick?  Or, could the fact that I've used Cocoa Bean Hulls as a mulch been part of the issue, too?  Cocoa Hull mulch creates that very MAT that is one of the problems from Hydrophobic mulch.  Was layering hull mulch with hardwood fine mulch part of the problem?  I'm not sure, but I can only guess that the answer is yes.
So, what do I do now?  First, when you look around for answers on hydrophobic mulch, everybody says the same thing:  work the mulch and break up the mats.  Ever since I identified this stuff last Summer, I've done that.  But, I also added a little bit of E-Corganite to the mix last Fall.  My thought...was to add a little nitrogen to get the hardwood to break down a bit.  Then, the garden beds went to sleep for the Winter.
This past week, I went out there and worked, once again, the mulch.  It isn't as 'matted up' as it was, but there's still some white pockets.  I knew that, last year, I used some alfalfa cubes to speed up the decomposition of my compost bins - by adding new, nitrogen.  So, what if I did the same thing to this area of mulch that won't let things grow?  What's the worst that can happen?  I add some new organic material the soil?   That's what I did:  Took the bag of Alfalfa cubes and dumped about 3 gallons of them into a bucket. 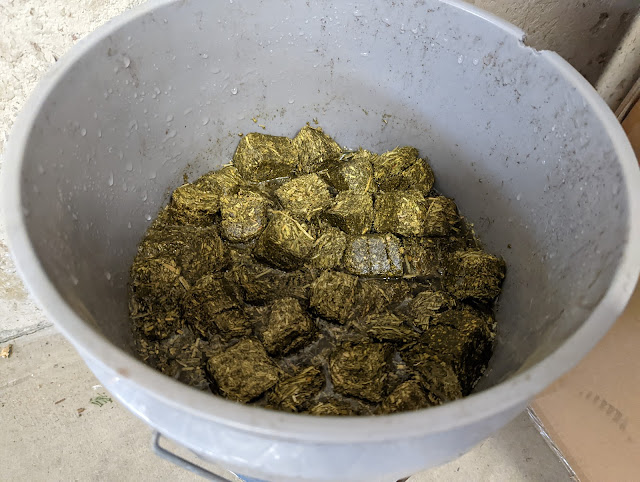 And soaked them for a few hours in water. 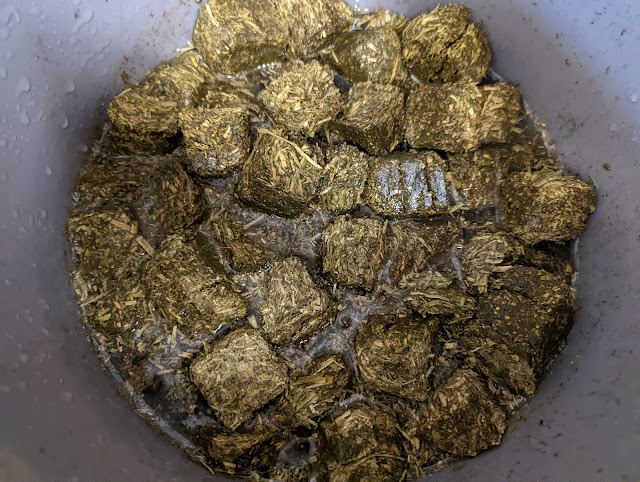 Then, I dumped them on the mulch - where the hydrophobic areas are - and began to work them into the ground.  First, I used my heel and a rake to further break up the cubes.  Then, I raked the alfalfa into the top layer of the mulch. 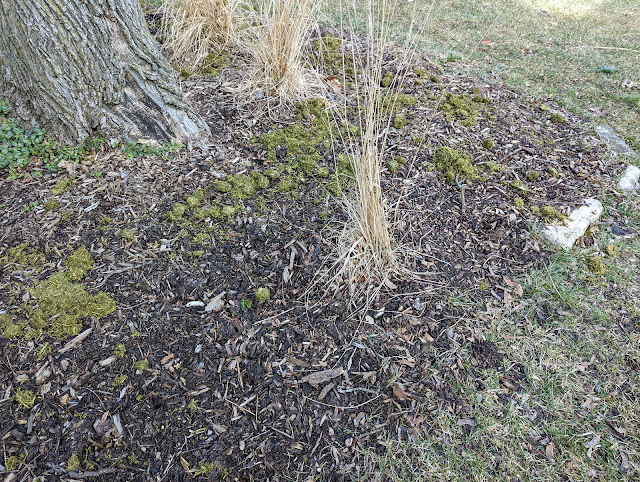 Conveniently, a snowfall came on Monday and sat on top of all of this to keep it wet and helping work the nitrogen into the mulch.
Will it work to remediate the hydrophobic mulch?  Not sure, but I'll monitor the area this Spring and Summer.
Also....what to do about mulch this year?  I'm thinking of NOT applying any hardwood mulch at all, but rather laying on a thin layer of biosolids across the whole area.  Taking a year off from mulch might help in stopping that 'too thick' application that's been going on for a number of years now.
alfalfa cubes Cocoa Bean Shell Mulch front yard garden diary hard to grow hydrophobic mulch matted mulch mulch mulch beds mulch problems norway maple soil amendments too thick of mulch
Location: Downers Grove, IL, USA