I was walking around the front beds and - once again - I'm struck by how I've had not a lot of luck with anything I've planted underneath our large Norway Maple tree that sits right outside of our front porch.  This large tree is in decline - likely due to the construction we had when we built our house in 2016 and 2017.  I've tried to attack *that* problem by having the arborists from Davey apply a growth regulator and a liquid fertilizer last year.  And, I'm hoping that the tree is on a path towards survival.  They'll come back this year to apply a second year of fertilizer - that I'm pretty sure (based on these photos) is working.

This year though, I lost a mature hydrangea - a Vanilla Strawberry (one of four out front) and my Lime Light Hydrangeas suffered some this year - and dropped a lot of their leaves in the middle of the Summer.  Here, below, is a top-down photo showing the dead hydrangea (very bottom, middle) and the proximity to the Norway Maple tree: 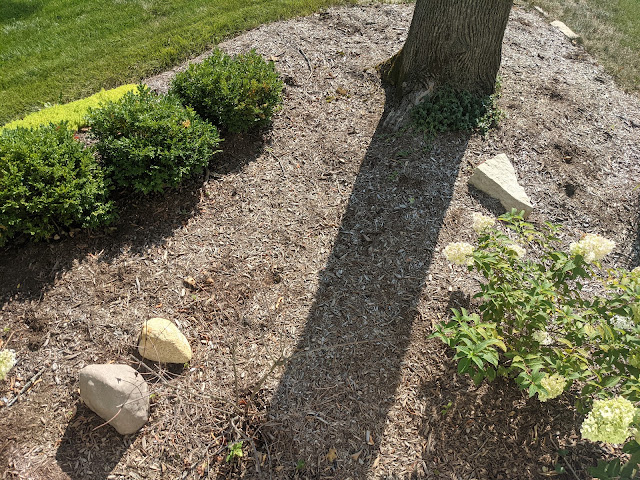 This is another in what I'd call a long-line of death and decline around this Maple tree.  Last year, I planted an Empress Wu hosta.  Didn't come back this year.  There were three blue hostas that were planted when we built - along with two Bottle Rocket Ligularias.  None of them have made it.

I've also planted a lot of tulip bulbs that have (for the most part) done just fine.  And earlier this year, I planted a Totem Pole Switch Grass inside the canopy.  Will it come back next year?  I'm not sure.

I went looking around the Web and found this post on Allium Fields: "What the heck grows under a Norway Maple?"  I felt like I found *some* of the answer to my questions.  The post talks about the mat of roots that I've come across:

They also spread roots near the surface in such a thick mat that it can be difficult to dig through with a shovel, let alone for a plant to get a healthy start.

And...this hits home pretty hard - because as I mentioned above....I've tried a bunch of things.  From the post:

Each year we try a few new items to see if they’ll survive under Norway Maples. Most do not make it, but the ones that do we try to install more. One thing you may notice is that contrary to what we usually do, many (most?) of what we grow under the Norway Maple is NOT native. There just aren’t a whole lot of native species that do well under Norway Maples that we want...

Jeremy at Allium Fields then shares a list of what has worked for them - and it includes sedums, bulbs, Lungwort, Epimedium, Alchemilla (Lady's Mantle), Heucheras, geraniums, ferns, succulents and polygonatum.

Welp...I have a bunch of those already - bulbs, Lungwort, Epimedium, Heucheras and ferns.  Just yesterday, I posted about moving some of the Lemon Coral Sedum over to a hard-to-grow spot in between two driveways.  Seems like I should take some of that *same* Lemon Coral Sedum and move it over to under the Norway Maple.

Then, maybe think about adding some of the other perennials mentioned - maybe I'll come across a Fall sale for some of them?  I can see three lungwort or Coral Bells going just fine in this area.