Earlier this Summer, I brought home and planted three Little Lime Hydrangeas in our backyard.  What feels like so long ago - but was actually just six weeks ago - I was wrapping up my big push around planting shrubs this year with these three flowering dwarf hydrangeas.  I ended up planting them right in front of the Apple tree Belgian Fence along the north fence line.

In the photo below, you can see the three shrubs and how they're getting their first blooms - and really earning their name: 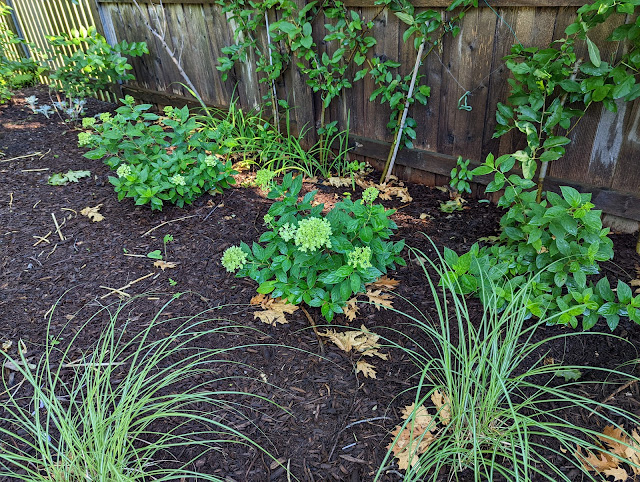 A few notes for the garden diary here:  in the foreground of the photo above, you can see two of the three Miscanthus sinesis 'Adagio' grasses. They're doing well in this spot - with this being their second growing season having gone in late last year.

Second - if you squint, you can see one of the Chicago Lustre Arrowwood Viburums on the far right.  Aside from the dang rabbits nibbling on these, they seem to be doing just fine - and are putting on new growth.  They'll need winter protection this year (along with a bunch of other stuff), but I'm hoping that this full growing season will allow for a strong enough shrub to power through.