Yesterday, I posted a photo and an update on the line of three Hakonechloa Macra Hakone Japanese Forest Grasses that I have planted as a border under the tree swing Northern Red Oak tree in our backyard and remarked at how much size they had put on in just one year.   While I was over in that section of the garden, I grabbed a photo to document in the [garden diary] the current mid-Summer state of the stand of Hakonechloa macra All Gold Grasses that are planted right around 'the corner' from the other grasses. The last time that I posted a peek at these grasses was in this post about my Drumstick Allium.  But...the last time I posted the details of these grasses was just a week more than a year ago - August 2021.

And...before that was when I planted three additional grasses in May of 2021.   At that point, there were nine of these grasses planted in this slice of the garden.

By August, I had noted that there was one in decline and had eight remaining.  What do these look like today - in mid-Summer?  See below for a photo showing eight remain today and they seem to have established themselves. 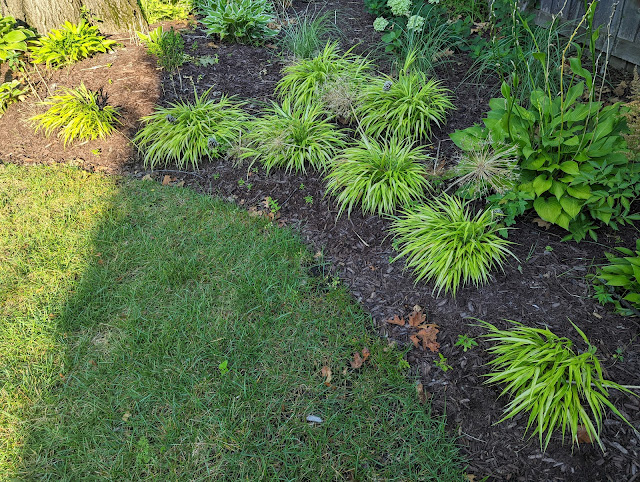