Yesterday, I posted about the 22 new hostas that I (now) have in the garden thanks to the magic of perennial plant Fall dividing.  I also went about dividing some other plants in the garden:  Shaggy Shield and Japanese Painted Ghost Ferns. First up, the Shaggy Shield Ferns.  I should have included these in my recent 'ferns that still look good' post, but I missed them.

I planted these two - along with a pair of Tassel Ferns - in May of 2021.  A year-and-a-half later they're doing really well.  Grew up and out.  Below is a photo showing how big and proud these two ferns were pre-dividing. 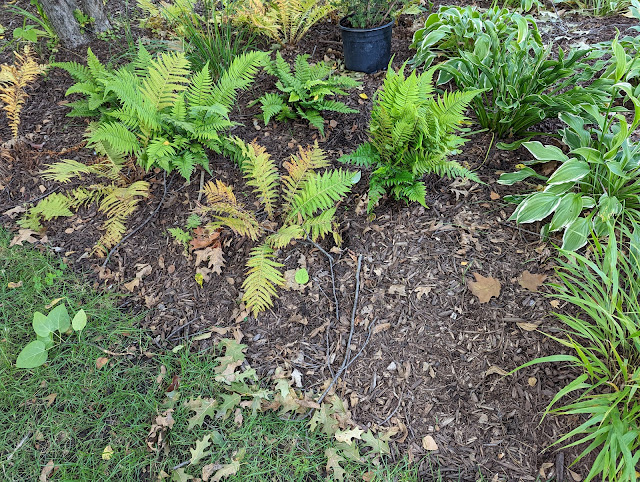 They are a thicket of fronds. 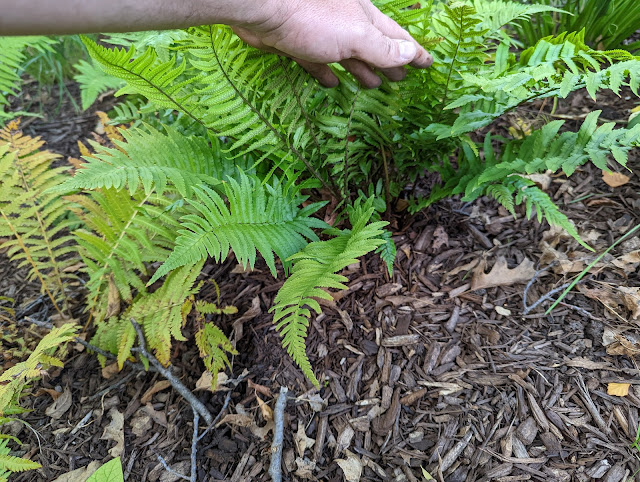 Because I didn't love where they were located (kind of hidden), I decided to dig them both up.  I also dug up a handful of Ostrich Ferns and relocated them back around the tree swing tree.   Below is what one of the Shaggy Shield Ferns looked like including the root clump.  (I wired up the fronds to keep them out of the way.) 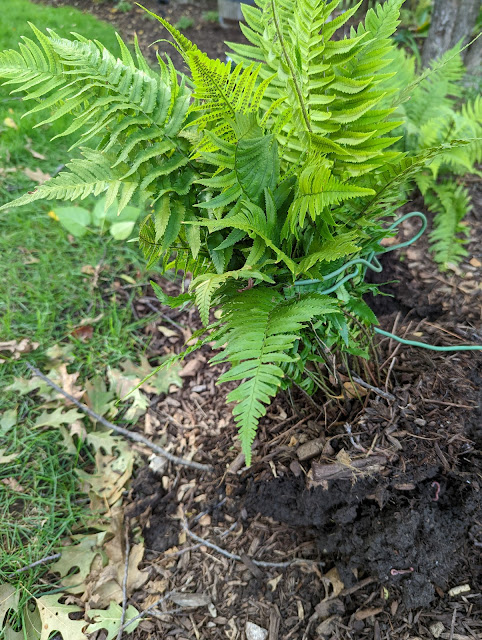 Here's the other one: 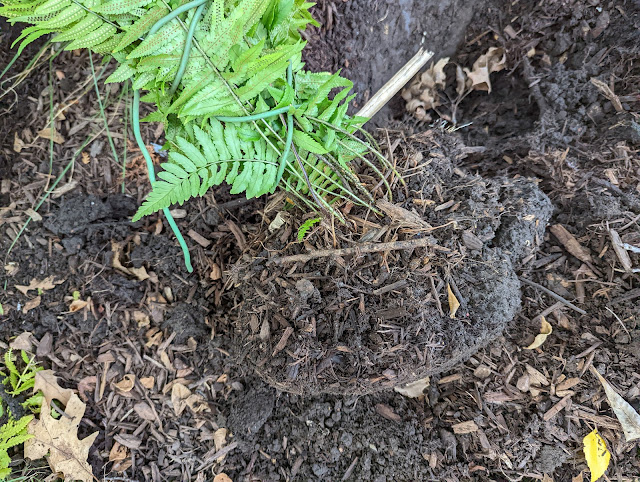 Below is a photo showing the holes that I created when I dug out the Ostrich Ferns and the pair of Shaggy Shields behind (the holes): 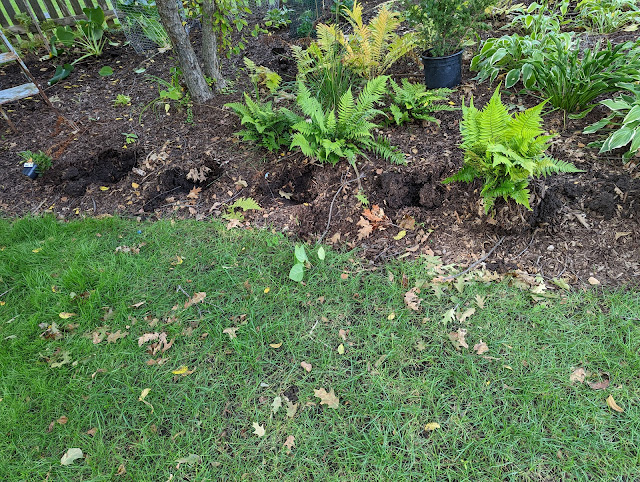 I divided each clump into two and now we have a neat row/border of four Shaggy Shield Ferns.  SEe below for a photo.  This is +2 new plants.  Taking the total to +24 for the Fall dividing season (so far): 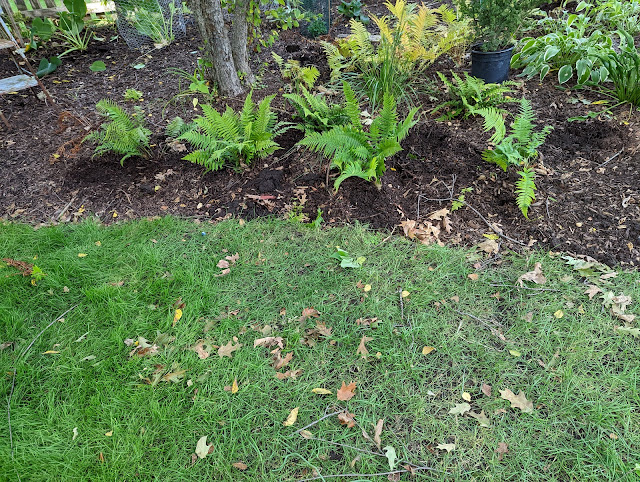 The other fern that I decided to try dividing was a Ghost painted fern.  These ferns *were* on my recent list of ferns that look good after hot, dry Summer.  I have four planted in front of the weeping Nootka Cypress tree, but because this is the first time I've tried to divide these, I decided to (for now) hedge my bet a little.  Instead of digging up and dividing ALL of them, I chose just one - the strongest one. 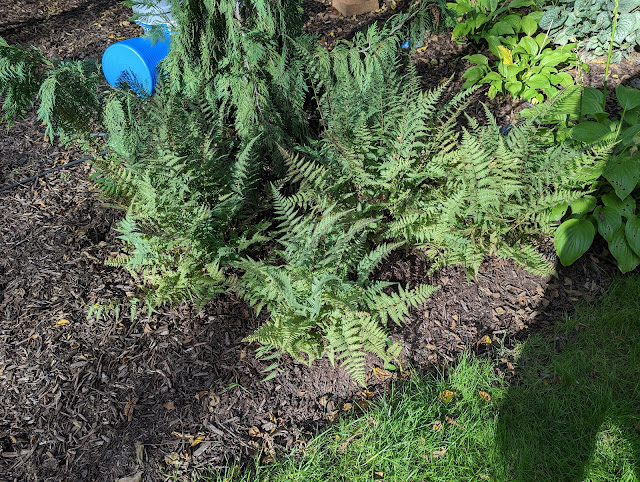 Below is a photo of the clump I dug up and divided into two ferns: 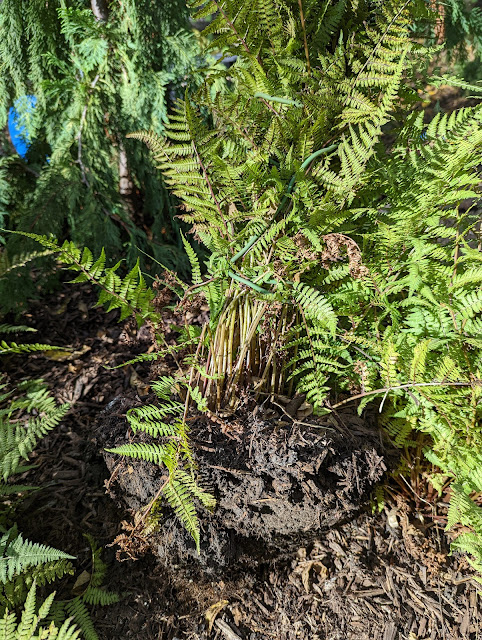 And, here below, is the result:  the fifth fern is on the top right of the photo, tucked in next to the existing four. 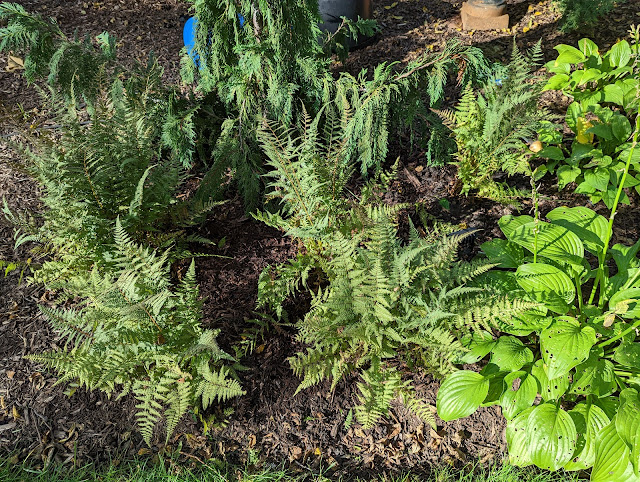 Adding this one new fern, that brings my total up to +25 new free plants this season from division.   Once I wrap up the posts about all the various divisions, I should do a recap against previous seasons to see how this year stacks up.
2022 to-do list dividing plants Fall 2022 fall dividing fern diary ferns fronds garden diary ghost ferns Shaggy Shield Fern
Location: Downers Grove, IL, USA