Posted by Jake Parrillo on October 12, 2022
Fall is - maybe - the most productive I'm in the garden all season.  The cool temperatures sure help.  But, so does the fact that you can get pretty great deals on plants at the nursery in October.  And...couple that with this being the best time to divide perennials means I'm out there making lots of additions to the beds.
My 'NEW free plants' scorecard this fall reads like this:  2 hostas under the Oak, 2 Bressingham Blues by the Viburnums and 2 Lancifolia Hostas in the fern garden.
That's six new plants so far.
But, the past weekend saw even more dividing and transplanting.  First up, the hostas that are sitting under the Frans Fontaine Columnar Hornbeams.  They've struggled from what I think is either sunburn or frost burn the past few years.  They are very likely getting TOO MUCH sun.  Below is a photo showing a larger hosta in the middle with my spade showing how I was going to divide this one.  And, to the right is a smaller hosta that isn't thriving. 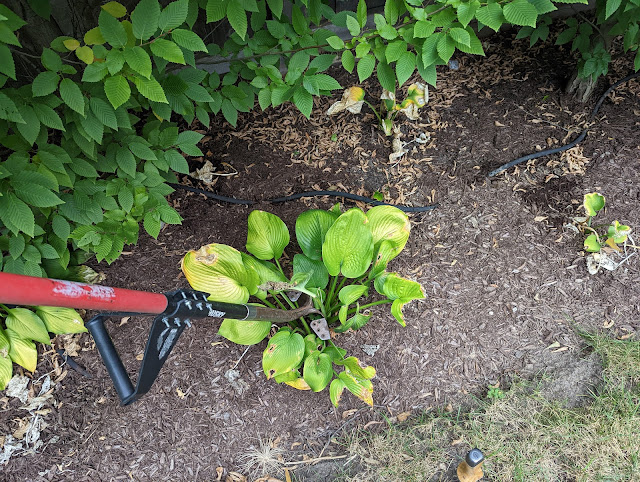 And, here below is the 'after'.  Divided hosta + dug out smaller one: 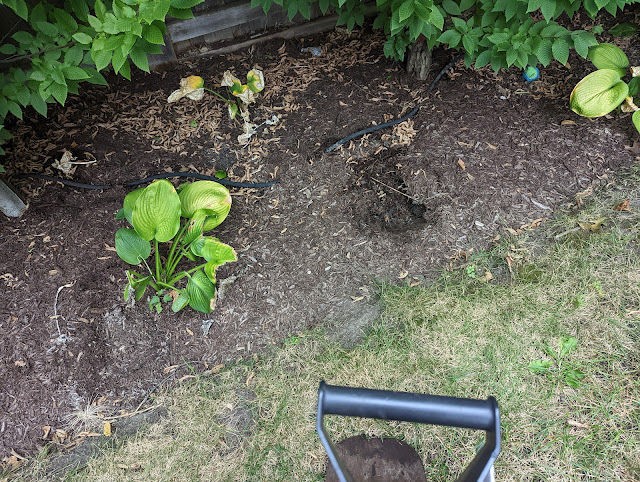 I put the division back in the understory garden by the fence.  And the transplanted smaller one went back there, too (by the picnic table).  Photos of them below.  The hosta closest to the fence is from a different division, but let's count it here. 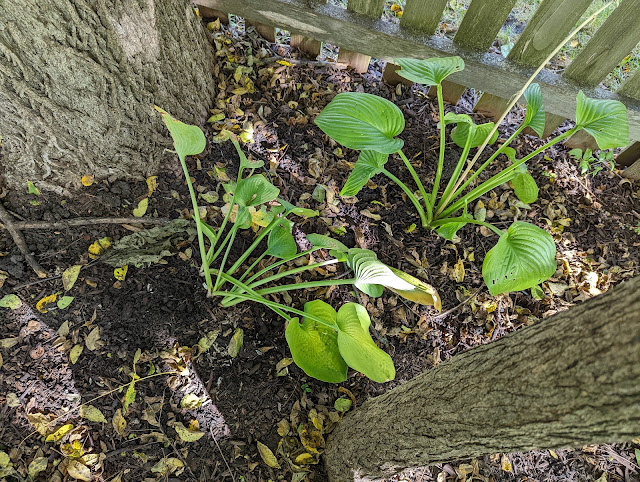 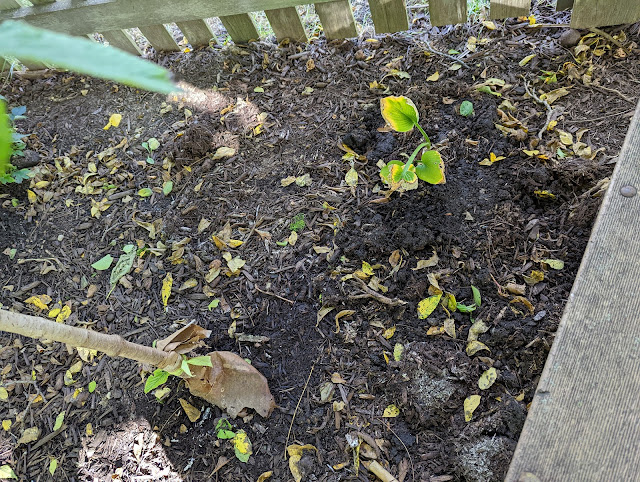 With those, the running totals are:

Next up are the hostas on the southside of the kitchen.  These, too, were 'sunburned'.  There are a couple of types over there.  Below is a photo - the Lancifolia on the right was divided in three.  And the unknown hosta in the middle was split. 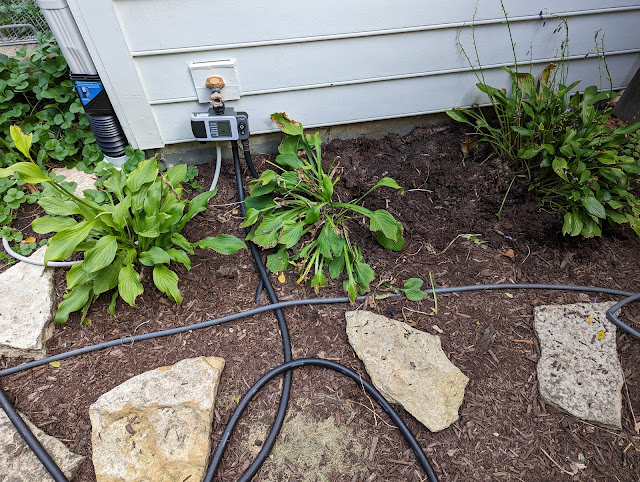 Here's where the two new Lancifolias went - southside along the fence. 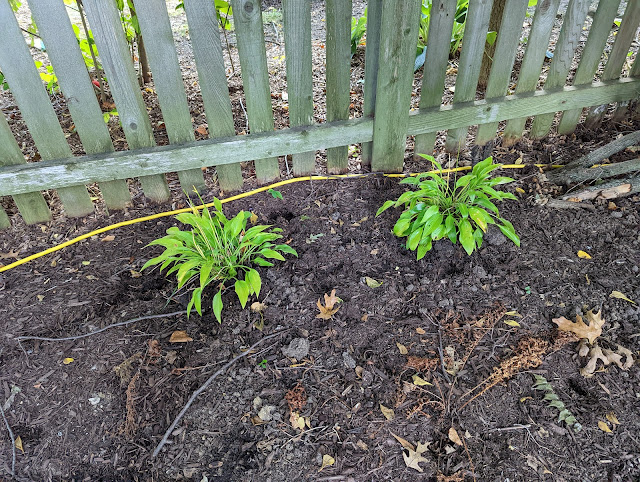 And, here is where the other one went - by the other two around the Oak tree. 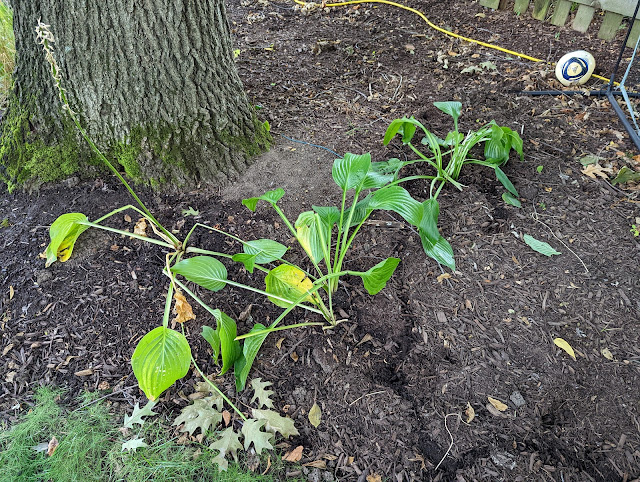 Next up are some of the smaller Frances Williams hostas - these bareroot hostas were planted (in a couple of cases) too close together around the tree swing.  I moved two of them back in the understory garden.  They're small.  Below are photos of both: 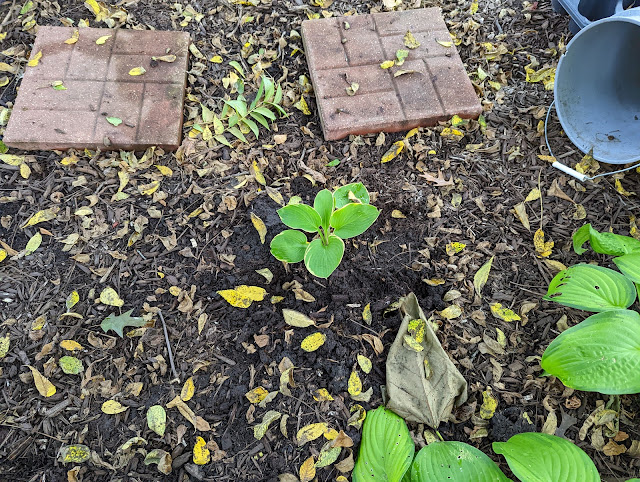 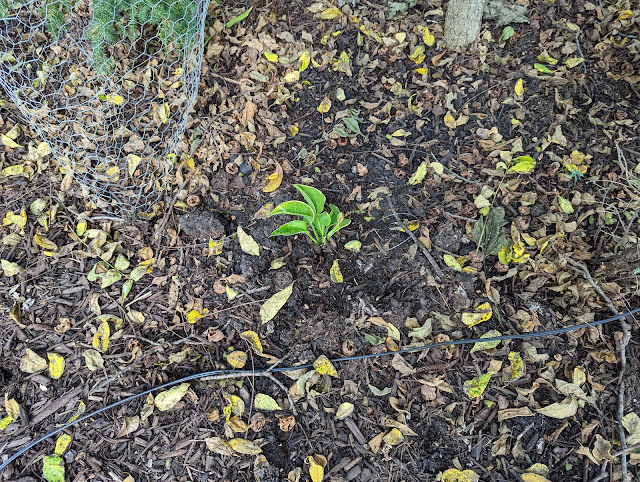 Next up is the Christmas Tree Hosta planted under the tree swing.  Started as one, I divided into thirds.   Here, below is the before division: 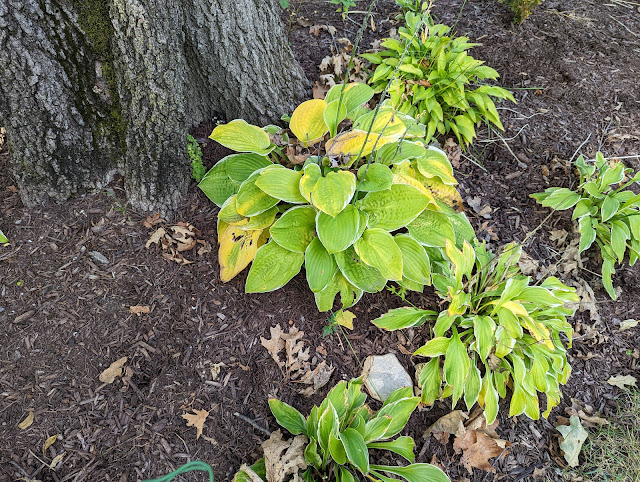 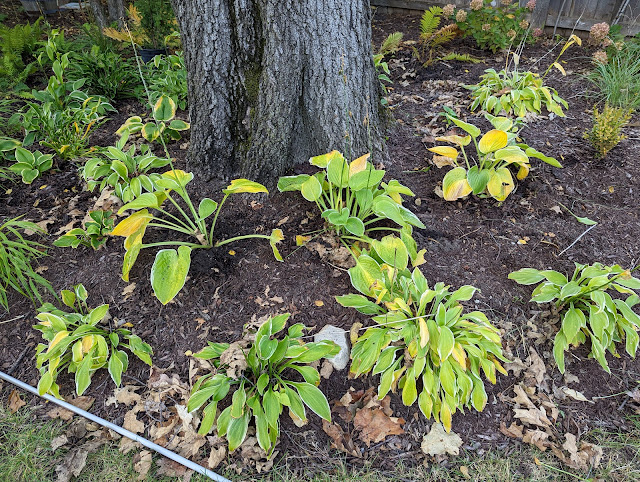 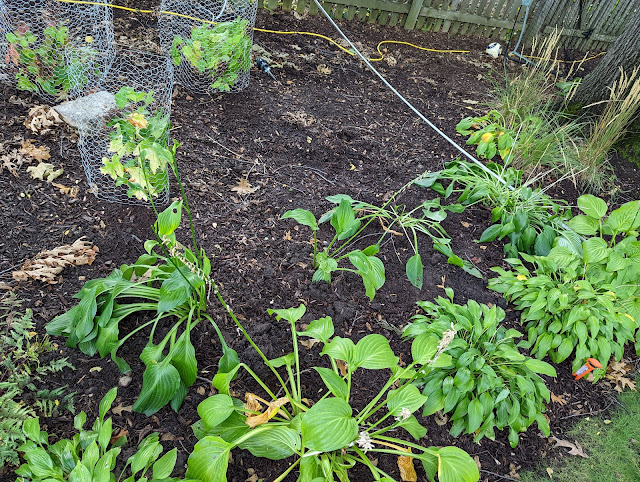 Here are two more in the understory garden (+18). 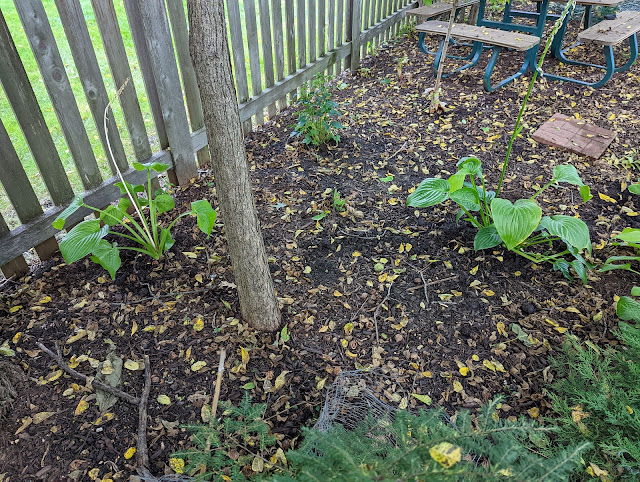 Two more in the middle of the understory garden below (+20). 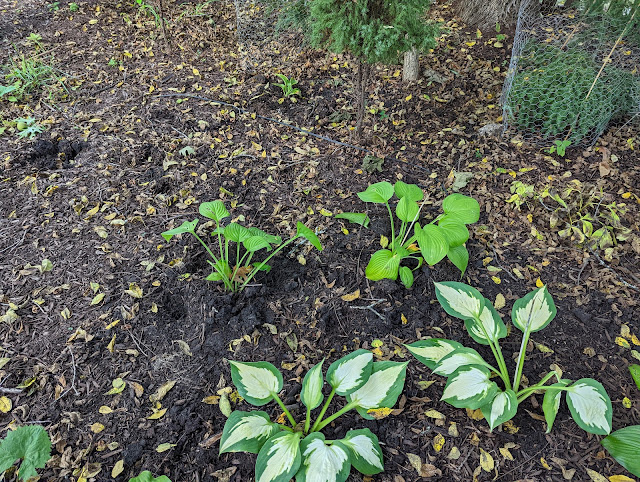 I divided one of the Guacamole hostas that is out by the contorted Harry Lauder Walking Stick tree.  (+21) 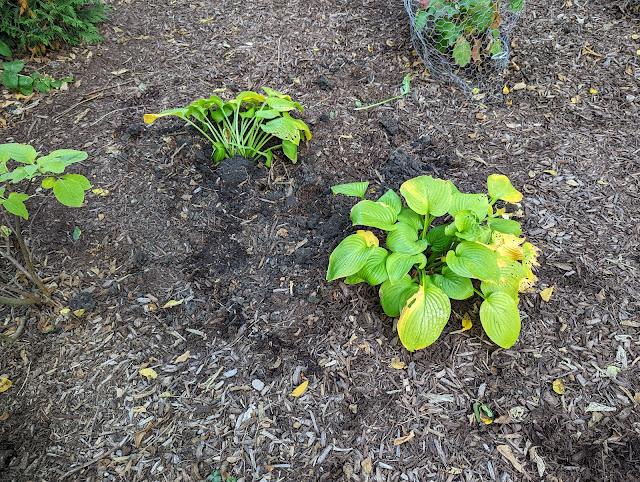 Also divided a hosta that is sitting too close to the Pagoda Dogwood tree in back.  +22.  Here, below is the 'before'. 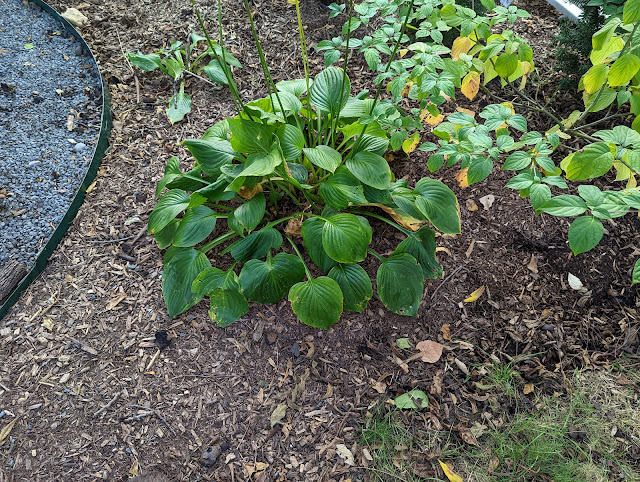 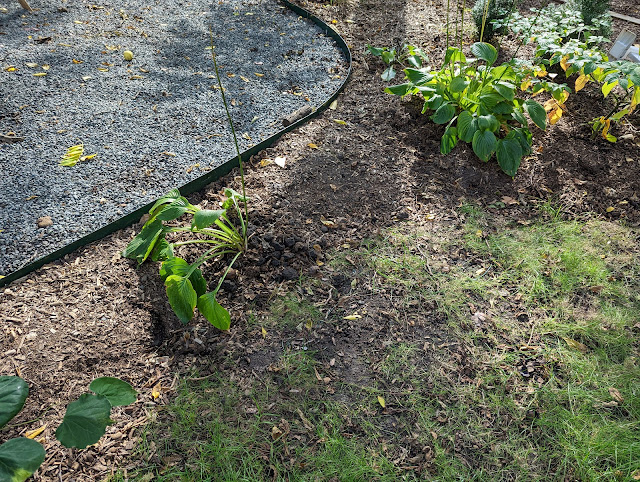 Below are some photos showing how I was dividing these up - including what I think may be a Guacamole in the mix: 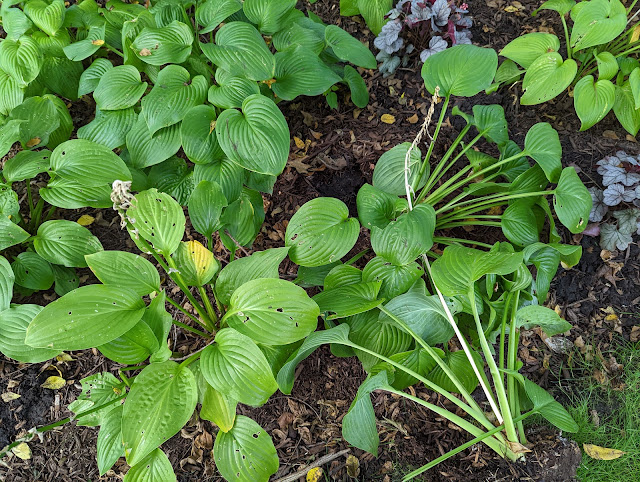 There's one more transplant to note - a small Frances Williams near the understory garden.  See below 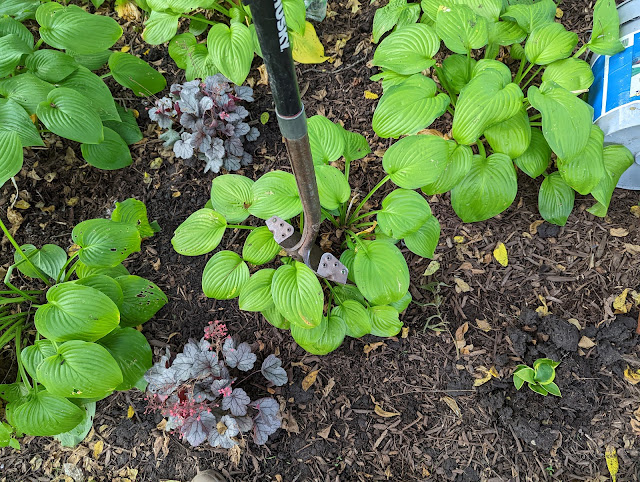 That seems to have been the full rundown of all the hosta divisions so far.  And the transplants.
Where are we at scorecard-wise?
+22 new 'free' hostas
and 4 hosta transplants

I have a few more things I'm going to try to squeeze-in with divisions, but even if I don't get around to it, I'm satisfied with 22 new plants.