Adding Another (Or Two) Japanese Maples in 2023? 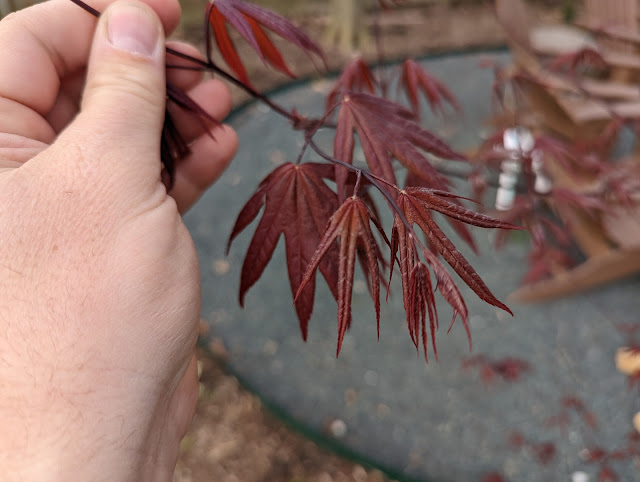 Back in 2020, I published a long post talking about how I wanted to add a (at least one) Japanese Maple to the backyard.  I ran through a series of varieties to try to narrow down what I wanted and ended up planting an Emperor 1 Japanese Maple (from the Morton Arboretum Sale) back by the firepit.  That tree has now gone through two seasons and seems to be settling into the spot.  The dark maroon leaves of the Emperor 1 Japanese Maple tree are in the photo above.

I also planted a Tamukeyama dwarf Japanese Maple up a little closer and was happy with that one, too.  Until this year, when that tree seemed to die.  Could it be the Walnut trees?  Maybe.  I've left it in the ground to see if it will come back this Spring.  If it doesn't, I'm thinking that I should replace it with ANOTHER Emperor 1 or other Japanese Maple from the Morton Arboretum this Spring.

Maybe on the north side, too? Underneath the Cataplas? In front of the Viburnum?   Or in the far back yard, behind the Hicks Yew hedge.  Or, maybe in an espalier alongside the garage?

I suppose a couple of Japanese Maples should go on my standing plant wish/want list.  I'll add them to the already existing plant and shrub list.