Back about a week ago, I posted a preview of where we were going to put our firepit area in the backyard with a little gravel area surrounded by some beds and (eventually) linked with a little path from behind the Northern Red Oak tree.  One of the new things that I'm planting in the border bed between the lawn and the firepit is a new tree.  And it isn't just *any* tree.

It is a tree that I've been thinking about for a while - based on my musings about how I should add a couple of Japanese Maple trees to our yard.  In that post, I included both the traditional (and widely available) Bloodgood Japanese Maple and mentioned that there had been a tweak to that cultivar to make it even more Cold-weather-hardy (for our Zone 5b) with something called the Emperor I Japanese Maple tree.  Ever since then, I've been looking for an Emperor I tree.  I've come across a few - in various sizes and costs, but they were all too expensive for me.   As is the way with MOST Japanese Maple trees.  However...in the back of my mind, I keep thinking about what my Dad always tells me:  You don't get what you don't pay for.

And that's why I grabbed this tree as soon as I saw it at the Morton Arboretum Spring Plant sale.  It is a good-sized Emperor I tree that was just $35.  It is about six feet tall and has a thin trunk, but has a nice shape for such a young tree.  Here it is against our house when I brought it home below: 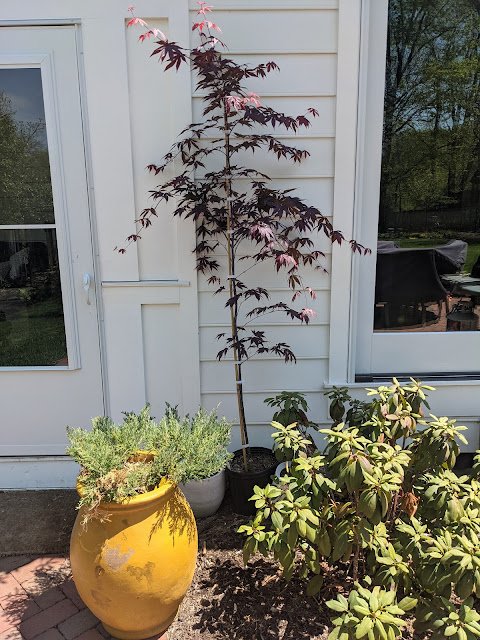 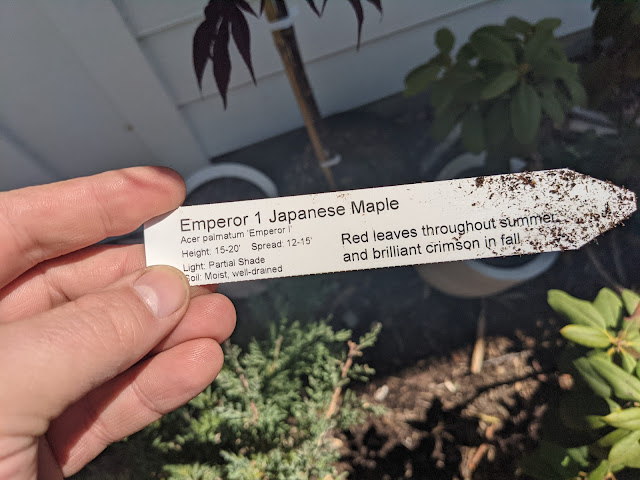 So, back to the firepit area.  In that border bed between where we're going to sit and where the lawn is growing, I wanted to add a little bit of vertical interest.  This tree would do just the job.  I dug a good hole (no fifty-cent hole for THIS tree), amended it with a little bit of chicken scratch manure and watered it in good. Here's (below) how it looks before mulch and before I install the edging for the gravel (you can see the temporary plastic edging in the photo below that I was using to kind of site my lines. 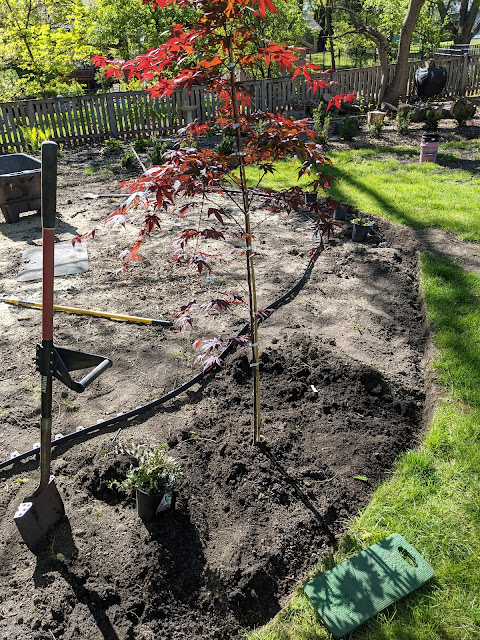 This is the second Japanese Maple tree that planted this year - the first one being a small Tamukeyama Japanese Maple that I planted in some pretty deep shade.    #18 on this year's to-do list is to "Continue to build towards a Japanese woodland-inspired garden", so while I'm not hanging any 'mission accomplished' banner just yet, this is another big piece of the puzzle towards achieving that goal.  When you add up the two new Japanese Maples, the new All Gold Forest Grasses and the addition of some new Japanese ferns (shaggy shield, tassel), I'd say this one is done.
Also, of note that last week, I posted a 'cleaned-up list' of my tree activity on the property with what I think are more accurate numbers of plantings and deaths.   And, right after that post, I shared the details of the new (large - for me at least) Weeping Nootka Falsecypress tree that I planted in the new north bed in back.  That was the third tree of the season, making this Emperor I Japanese Maple tree the fourth tree of this growing season.
Thus, this is the 56th tree planted since we bought the property and have 35 trees alive.  Across this being our fifth growing season here.
56 trees planted/5 growing seasons = 11.2 trees on average planted each season
35 trees alive/5 growing seasons = 7 trees on average survive each season.
2017 (9 planted. 4 Dead. 5 of the original annual total alive now):
1. Flowering Pear in backyard on north side.
2. Flowering Pear in front yard by garage. (LOST and replaced)
3. Japanese flowering cherry
4 and 5: 2 Lindens that I espalier'd and placed by the south fence line near our kitchen windows.
6. A Dawn Redwood from Earth Day 2017 (LOST and replaced)
7. Nat's Saucer Magnolia in our front yard
8. A Corkscrew Willow all the way in the back (LOST)
9. A Crimson King Norway Maple near the trampoline
2018 (17 planted. 6 Dead):
10. Another flowering pear from Earth Day 2018
11. Red Maple Sun Valley tree from Earth Day 2018.
12. Weeping Cedar tree - our first evergreen.  (LOST)
13. The weeping flowering cherry tree that the Babe planted for Earth Day 2018.
14, 15, 16, 17, 18, 19, 20, 21. These Frans Fontaine Hornbeams.
22. A replacement Chanticleer Pear tree (3" caliper) out front by our garage
23. Our second evergreen - a short Fraser Fir Christmas Tree out by the trampoline. (LOST)
24. This Canadian Hemlock that is the first of nine that our landscape plan calls for in the backyard. (LOST)
25. Our replanted/replacement Dawn Redwood. Same spot as the first.
26. This teeny-tiny Bald Cypress that I planted in the front yard, in between our driveway and our neighbor to the north.
2019 (9 planted.  5 Dead):
27, 28, 29.  A set of three small Canadian Hemlock Trees in our far backyard. (Two Lost)
30, 31, 32.  This second set of three small Canadian Hemlocks along the north fence line. (One Lost)
33.  My new Weeping White Spruce that will only grow about 4' wide placed near the fence line alongside the espalier'd Lindens.
34.  A NEW Dwarf Alberta Spruce planted near the south fence line.  Our first "dwarf" tree.
35.  This new Hakuro Nishiki Willow (Dappled Willow) tree planted close to the flowering cherry on the southside.  LOST - October 2020.
2020 (So Far) (17 planted and 6 Dead):
36.  A small Chanticleer flowering pear on Earth Day 2020 outside our screened porch.
37.  A very thin Lombardy Poplar tree - columnar form - in the way back wood chip area.  LOST - July 2020.
38, 39, 40, 41, 42, 43, 44, 45.  These apple trees in a Belgian Fence espalier.
46.  A small Northern Red Oak tree - our first Oak tree planted.
47.  A 'decapitated' Lavender Twist Weeping Redbud that I planted on a whim.
48.  A replacement (from the nursery) Lavender Twist Redbud planted close to the brother.
49.  A tall(ish) London Plane tree that suffered some transplant and frost shock, but seemed to recover.
50.  Our second contorted tree - this one inspired by Disneyland Paris: a Harry Lauder's Walking Stick tree.
51.  Our third contorted tree - but one that checks A LOT of boxes.  Deciduous conifer.  Weeping.  Contorted.  Japanese.  Planted behind the front Maple - the Horstmann's Recursive Weeping Contorted Larch.  LOST - Aug 2020.
52.  Via the Morton Arboretum Plant Sale - a columnar tree from Japan - the Red Fox Katsura Tree that I planted as an understory tree to the dying Chanticleer Pear Tree next to our driveway.
2021 (So Far) (2 planted and 2 alive):
53.  A tiny bareroot Shagbark Hickory from the Benet Academy Environmental Club planted in the backyard.
54.  Our first Japanese Maple - a dwarf Tamukeyama Maple planted in the south backyard bed.
55.  A large Weeping Nootka Falsecypress from Wannemaker's planted in the new bed on the northside.
56.  A long-sought-after Emperor I Japanese Maple - our second Japanese Maple - that is now planted on the border near our new-to-be-created fire pit area in the backyard.
backyard Emperor I fire pit garden diary Japanese Gardening Japanese Maple japanese trees japanese-inspired garden tree diary trees trees planted
Location: Downers Grove, IL, USA