My Staghorn Fern journey started back in March of 2021 with the purchase of a small, potted Staghorn Fern from the orange Big Box store.  As I learned a little bit (or...'got to know') Staghorns, I decided to just leave this one in the plastic container that it came in, but modified to provide for A TON of drainage/airflow with holes all over it. That first Summer, I put it outside and it seemed to thrive.  I brought it inside as the weather turned and put that Fern - along with other houseplants - under a grow light during the Winter.  Two years ago tomorrow (Jan 24, 2022), I posted some photos showing the first real 'Antler-shaped fronds' that the fern had grown.  This was a real milestone as the fern started to *look* like a real Staghorn Fern.  That small series of successes lead me to take on even more with Staghorns. I bought more, mounted some of them.  And...didn't really get the results I wanted.  But, I also gave away a pair of the mounted Ferns to folks and was happy to see that they were thriving.  The one I gave my Mom - in particular - was growing a ton of fronds - upright and erect with antler tips.  And...then...this past Fall, my Mom's Staghorn Fern threw out a beautiful, leather-like sterile basal Shield Frond that covered the base of the plant.  Wow.  I was very jealous.

Not only had I suffered a bunch of Staghorn Fern setbacks - saw some die - but, I also had NEVER even sniffed a shield frond.

Until this past week.

That very first one - the one that I left in the container - has stayed in that same container.  And, for *some* reason, it now is growing a tiny, but very much real, basal sterile shield frond.  Huzzah!  Take a look at a couple of photos below showing that immature sterile frond: 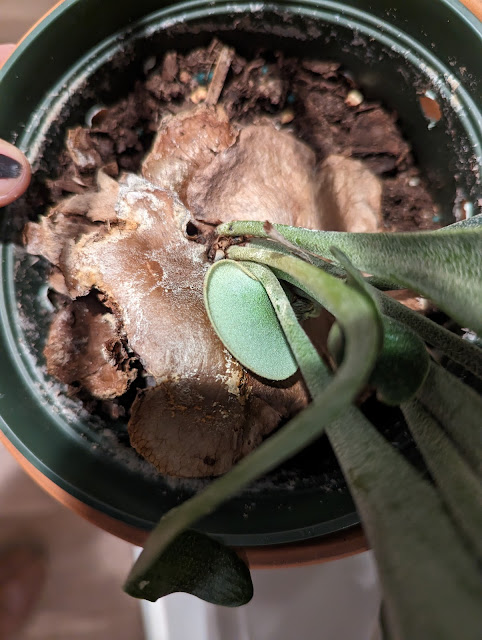 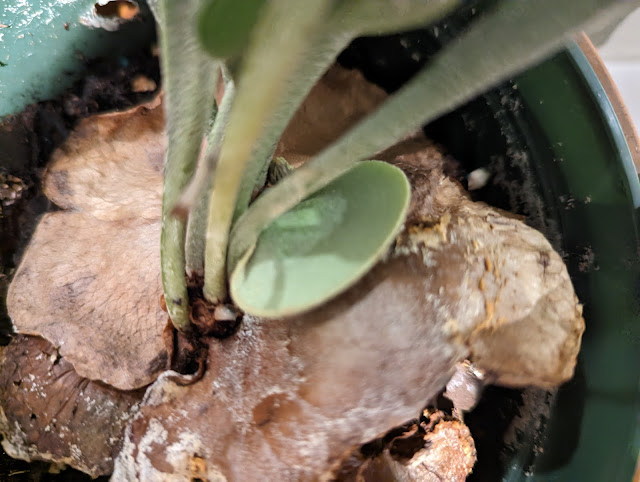 One of the changes that I've made with this one was by adding a small water dish *under* the pot.  Knowing that these like high humidity, this new water dish is holds a 'double pot' - the plastic nursery pot is inside a clay pot, so the fern's 'feet' aren't wet all the time, but...it gets this atmospheric humidity from the water dish.  That might have been the secret that unlocked this basal frond?

I've also been keeping a closer eye on the moisture-level of the board-mounted Ferns in an attempt to keep them happy and growing.  Time will tell if they've turned a corner or if they're just holding-on until Spring when I can move them back into more light and (eventually) outside on the porch.