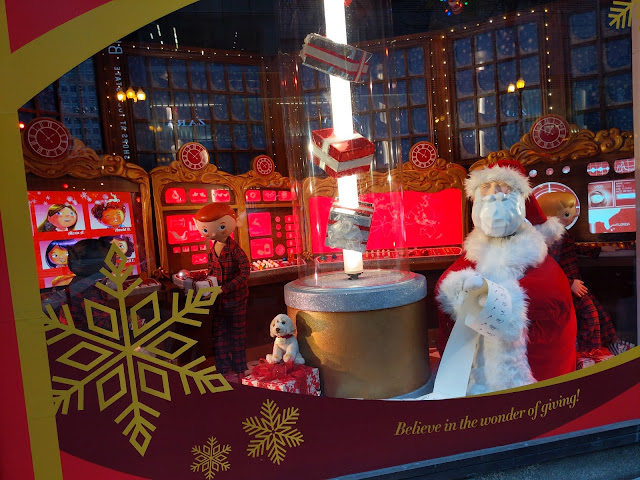 If you look closely at the Marshall Field's Macy's State Street windows you'll notice a little bit of corporate synergy showing.  Or corporate strategy at least.  In one of the window scenes you that you can see above, you'll see Santa in the midst of his North Pole glory with what I think is an Elf and a bunch of presents.  Right next to the center 'tube' is a little dog. 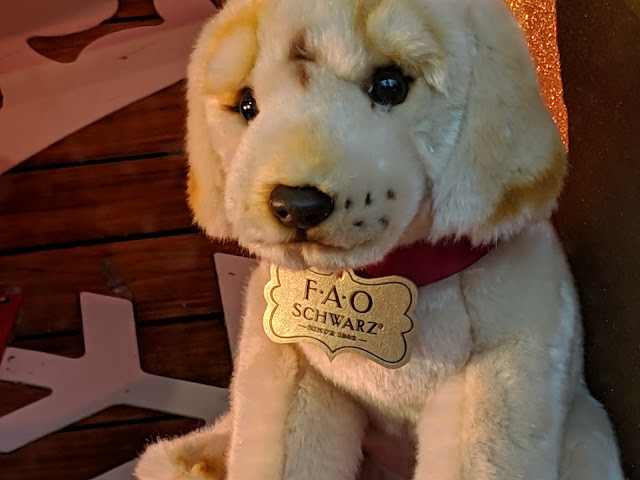 So, off I went into the Web to find out why.  Does Macy's own F.A.O Schwarz?

The answer?  Nope.  But they're working together.  This NYTimes story from 10 years ago points to the partnership.  Apparently, I haven't been paying any attention.


Two of New York’s most venerable retail brands, Macy’s and F. A. O. Schwarz, are teaming up for a risky experiment: bringing toys back to the department store.

F. A. O. Schwarz will open shops inside 685 Macy’s stores over the next two years, executives of the two retailers said Friday. It will be the first time in 20 years that Macy’s has operated a year-round toy department.

They've apparently been running with the FAO Schwarz 'store in a store' thing at the Marshall Field's Macy's on State Street for more than 10 years.

But, they *might* be playing it up more this year than before.

Because F.A.O Schwarz has signaled recently that they're attempting a comeback.  Forget the fact that Toys 'R Us was their former owner and they're gone now.  F.A.O is expanding.  Globally.


FAO Schwarz unveiled ambitious plans for its return to retail.

The storied toy retailer has set an opening date of November 16 for its Manhattan flagship, which will be located at 30 Rockefeller Plaza. It will mark the company’s return to the Big Apple after it closed its landmark Fifth Avenue store in 2015, and opens months after FAO’s former owner, Toys “R” Us, filed for bankruptcy and shuttered all its U.S. stores.

Interesting strategy.  I think the whole 'store in a store' thing is what is the most likely outcome for Toys 'R Us, right?  Imagine someone scooping up the logo, the brand and even the giraffe.  And then licensing it to some other retailer.  Walmart's toy section?  Welcome to Toys 'R Us.

As for FAO and Macy's, it seems like the partnership is alive and well.  And may have been showing all these years.  I just never noticed it.  But maybe I wasn't looking for it after all.

My kids will still press their noses up against the windows this season.  And they won't pick up on the synergy.  But I will!

Also, for those keeping track at home, I've covered the Marshall Field's Macy's State Street windows before here on the blog.