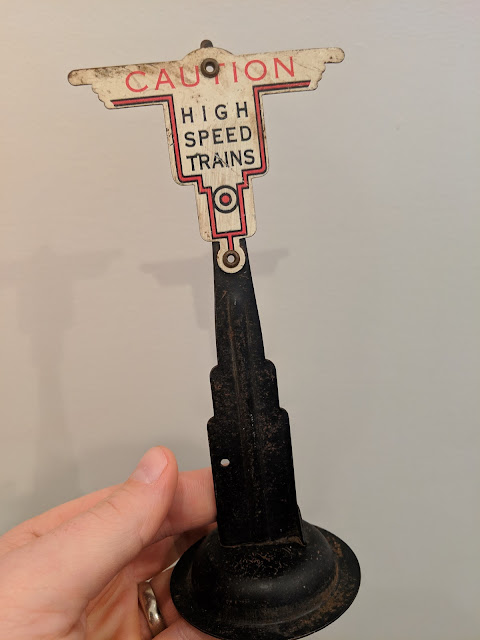 One of my Christmas traditions is going to the annual Dupage County Train Show with my Dad, my nephew and my kids.  I've posted about it the past few years and have done a little show-and-tell in posts of the items that we've added to the Mantleburg line.  Last year, I posted photos of the Plasticville Drug Store, a Schlitz Beer Lionel Billboard, an American Flyer Lackawanna Bridge, and a 70's or 80's era Lionel Flag Pole.  In 2016, we added an operating car or two.

This year, I ended up buying just one thing:  this Marx Tin Plate Pre-War trackside sign.  It was just $2 and I liked the looks of it, so I made the deal.

It doesn't operate or animate and it isn't exactly in line with the kids Mantleburg line (with our FasTrack and all), but that's just fine.

I've added it to our Christmas Train layout and I think it adds a nice, vintage touch. 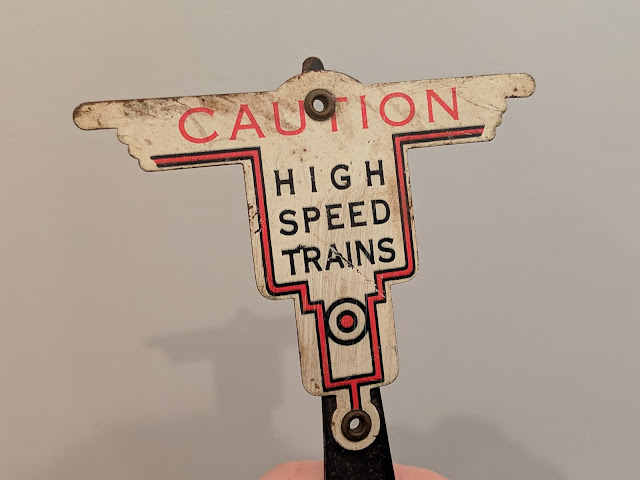 One of the things at the show that I was talking to my Dad and Nephew about was the fact that I'm pretty sure that I'm done buying boxcars.  I have a bunch and they're mostly used as filler cars on either the main train or just sit on a siding.  Almost every table that we walked by in the three or four buildings was selling boxcars.  Lots of them vintage and many of them new, but without an operating component or a theme (a different Schlitz Beer car than the one I already own?) that is super compelling, I think we're not going to be buying them any longer - nor will I plan on buying them as gifts for people.  Accessories are what we need to make the Mantleburg line a little bit more than simply a train and some cars running around an oval.
christmas train mantleburg line Marx Trains model trains o gauge pre-war trains train accessories train show trains vintage trains