On the way up to Twin Lakes Wisconsin, we used to drive by this garden center on Route 12 named Atrium Garden Center.  They had a beautiful nursery that seemed stocked with tons of trees, plants, shrubs and more.  We stopped a few times, but every time we drove by, I always admired one thing:  the topiaries that they displayed close to the road.  They had critters and shapes of all sizes.  Dolphins.  Guys with fishing poles.  Even a Mickey Mouse head.  You can see a bunch of their topiaries in some of these user-submitted photos on Google Maps.  Here are a few screenshots from people that have submitted them there.  (Note...these are not my photos and can be found in their original form here.) 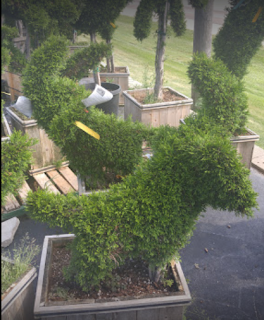 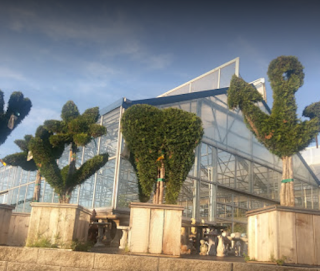 On one of our trips there, I looked more closely at the topiaries to try to figure out what they were made up of in terms of plantings.  They had large, square-ish wooden 'pots'.  They weren't quite pots as they were more like wooden containers made of slats.  And, of course, there was a metal frame underneath the plant material that helped create the shape and allowed the team there to groom them into their ideal state.

But, the actual plants?  I was surprised.  But, turns out they were arborvitaes.  Yeah...you know the type, normal green arborvitaes.  We had planted a series of arborvitaes in our yard in Elmhurst and they were small.   But by the time we were getting ready to move out, they had grown thick and lush and provided a nice break from our neighbors.  Here is a photo of them in their small state where I wondered if they were going to survive the winter.  They were planted in 2012 and we left in 2015.  Now, seven years later, I'm sure they've topped that fence behind them.

But, back to the topiaries and Atrium Garden Center.

A closer look at the topiaries showed me that they had planted arborvitae plants and then limb'd them up a few feet by removing most of the needles to expose a couple of main trunks of the plants, then once they hit the frames, allowed the plants needles to grow up/out.

Then....Late this Summer, we saw signs go up at the garden center that proclaimed that they were closing and going out of business.  Sure enough, they sold the property and someone is building a medical office building on the site.  I had admired the topiaries for too long and planned to swoop in, once the prices had dropped on the going-out-of-business-sale to the lowest point to try to grab one of them.  I was hoping for the Mickey Head, but would have taken anything.

Welp, I guess we didn't travel up there often enough because the next time we went by, I was prepared to stop in.  And the place was gone.  Like leveled.  All the stock was gone.  I am presuming that either another garden center or landscaper bought their inventory?  But, those arborvitae topiaries and me weren't meant to be.

But, now that I knew that the pros had simply used arborvitae shrubs to make a topiary, I have to think that I can replicate that idea, but in my own yard.

Enter the search for topiary frames.  I picked up this Angel-shaped topiary frame at a garage sale a few years back and never did anything with it.  I should do something with that, but it doesn't have the strongest appeal with me. However...with a quick spin around the web, you can find lots of frames for sale.  Some of them large.  Some small.  Some expensive.  Some not so expensive.  And there's a lot to love.  But, if I was to pick one, I wanted it to be personal and something smallish that we could manage.

And that's how I ended up finding this Cavalier King Charles Spaniel topiary frame.  You can see it in the photo above from TopiaryTree.net.

It is 16" x 23" x 10".  I am thinking the 23" is the height?  Maybe that's the width?  Either way, two-ish feet tall or wide is a very manageable size and would seem to be something that could 'leaf-out' relatively quickly - especially if we buy an arborvitae that is a few feet tall to start.  I'm envisioning that we'd likely have this Cavalier 'sit' on the ground and maybe be 'made up of' four small plants that I can train up the four legs.

It is also just $75.  Now, that's not insignificant, but it isn't a bank-breaker, either.  So it seems like a good place to start with trying something like this.  The Tree Center sells 1-2 foot tall arborvitae for $15, so for four of them, we're at $60.  Plus the frame, we're in under $150 for the entire project.

The remaining issue is thinking about where to place something like this.  Seems there's a couple of options:  first is to consider buying or making a large container.  Something like this Cavalier can likely be created to live in a container, but I'm just not sure how long or well arborvitae will do in a container in Zone 5B - where we live.  The issue with planting them directly in the ground is that our landscape plan is still so much in academic form only.  We have the actual plan.  But, we've made little progress towards making it a reality.  We have planted things that line up with the plan, but at the same time, our plan only calls for so much material and we have yet to find a tree or shrub or flower that we don't love.  So, things are likely to change and shift and move.  If I was to plant these small arborvitae today, I'm not sure that I know where the right place will be for us to enjoy it once we continue to build out the plan.

Add this to the list of items that I need to figure out this Spring:  along side the Belgian Fence espalier, the placement of a raised bed garden (on wheels, so it doesn't really *live* anywhere??), adding some columnar evergreens (somewhere?!?!) and where to put the new Earth Day trees with the kids (perimeter in the back somewhere?!?).  Spring can't get here soon enough.
arborvitae backyard dreaming backyard inspiration cavalier king charles spaniels cavaliers garden garden diary garden dreaming garden inspiration hornbeam hill topiary