Back in November of 2017, we installed a heated birdbath out in the backyard near our feeders that are located right outside of our kitchen windows.  This was the same feeder that we had in our house at Elmhurst but was in storage for a couple of years.  It is a heated one that doesn't have a pedestal, so I've set it on a little table.  Then about a year ago, I added a Water Wiggler to make the water move a bit.  Turns out, the Wiggler, while great to keep potential mosquitos from using the bath, made it hard for birds to actually use the bath as anything other than a drinking fountain.

Also, earlier this Winter, I came across this upgraded heated bird bath at Wannemakers and thought it would be a nice addition, but ultimately I didn't pull the trigger on it.

For this Winter, I decided to just dump the Wiggler and plug in the existing free-standing bath in to keep the water from freezing.  And for the past few months, I've watched a few curious birds check out the bath and wet their beaks, but none of them have really taken to it with any regularity.

That all changed recently with the Polar Vortex arriving late in January.  The brutal cold weather and the snow coming down has - I think - made the heated bath a little bit more attractive.

We have a lot of House Sparrows visiting our feeders (posted about them here) and now they're enjoying the bath.  Check out the animated image at the top of this post to see a group of four of them warming their little bodies in the water.   And...check out the one that flew away in the still image tomorrow. 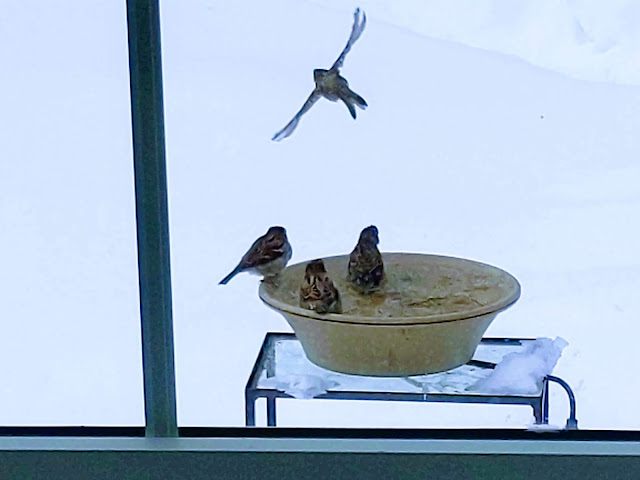 I'm not home most days, so it is just a matter of faith that the feeders and baths are getting used by our feathered visitors.  The food disappearing in the feeders is a strong signal to me that it is obviously being consumed, but up until now, I had not viewed - with my own eyes - any birds in the bath.   Now that I know they're finding it useful, I guess I'll keep filling it with water this Winter.
backyard birds birdbath birding polar vortex Sparrows Winter birding
Location: Downers Grove, IL, USA