The Outer Gardens of The Tokyo Imperial Palace 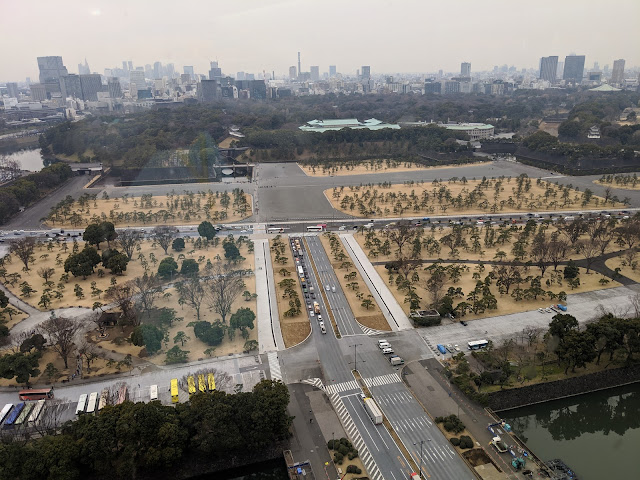 This is the view that I was greeted with most of the days I was in the office in Tokyo doing meetings and client work on my trip in February.  In the foreground where you see the yellowish/tanish ground is the Kōkyo-gaien or "Outer Garden" of the Tokyo Imperial Palace.  If you move your eyes more towards the upper portion of the photo, you'll see the buildings of the Imperial Palace grounds with the large stone driveway area in between the two.  The public grounds is the part that mere mortals like me are able to wander around in, but I think you can make your way around the Palace grounds and take in some nature.  Due to time constraints and uncertainty, I was only able to enjoy the front, public outer gardens you see with the yellow/tan grounds.

And that part was pretty spectacular.  There's tons of things written on the Web about the plants/trees and animals that live in and around the Imperial Garden, but you can start with this entry on Wikipedia that details the various flora and fauna that inhabit the grounds.

This post is focusing on some of the trees that I saw on my walk from the very front of the grounds - before the moat - all the way up to the area where you can see the two bridges that are called Nijubashi that I believe are a ceremonial entrance to the inner, proper palace area.
As you walk from the Ginza neighborhood towards the palace, you cross a major roadway (Hibaya Dori - I think) and enter the grounds. 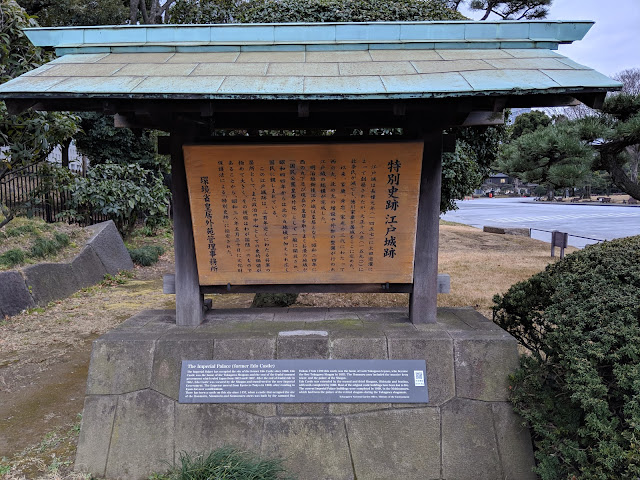 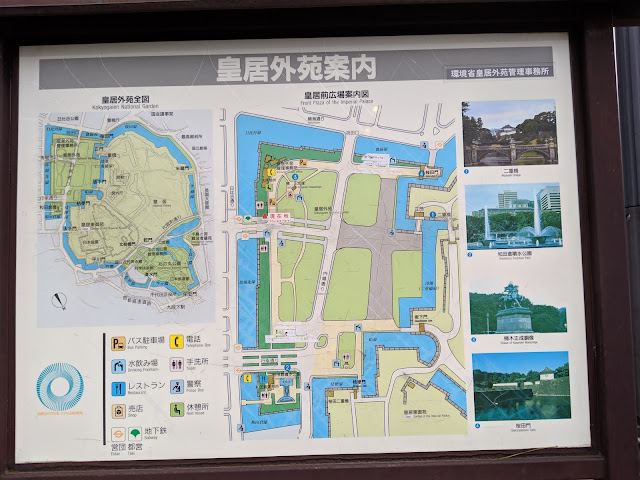 And here's a look from Google Maps that shows the grounds of the Imperial Palace.

Before I get to the trees here in the outer garden, this is a quick reminder that I've posted about a bunch of different trees from my trip to Tokyo.  Here's a post about some columnar street trees, a post about some bonsai-inspired trees outside of The Peninsula Hotel in Ginza and most recently, a post about a trip to a small Bonsai Shop in Ginza that sells tools and trees and pots.

When you walk towards the center of the grounds, the trees you see are all pruned and shaped in very purposeful ways.  These photos don't really do it justice, but as you enter, all that you can see are trees that are spaced and cared for by what seem to be master foresters.  Here's a view of the naked-eye view across the large driveway made of crushed stone.  This story says that there are 2,000 knotty Japanese Black Pine trees on the grounds. 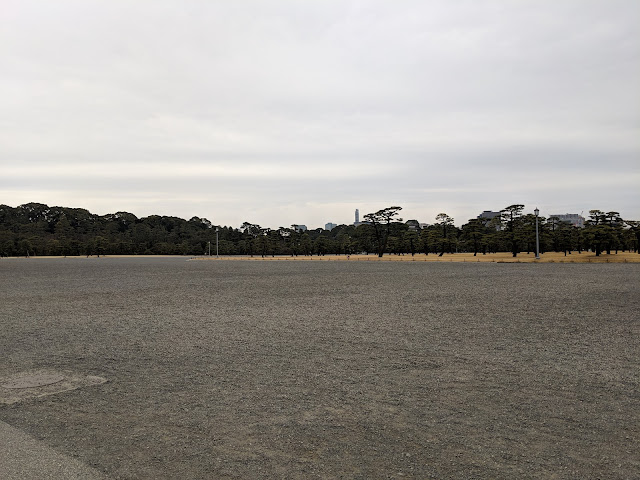 When you get up closer to the trees, you see that they have been shaped in really interesting ways.  Some of the trees are huge and majestic. 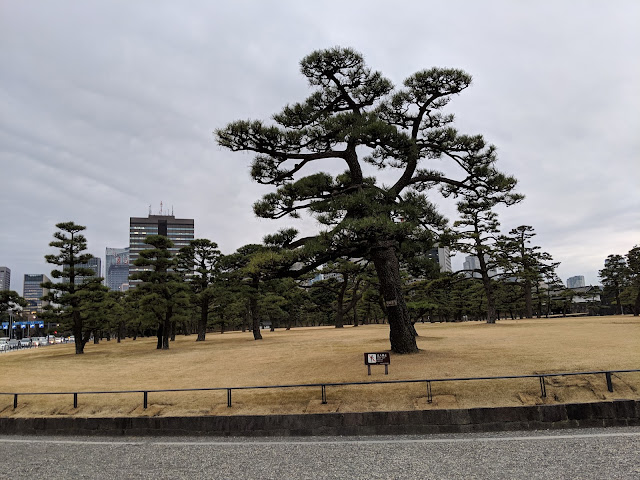 And others are less mature, but just as carefully pruned into shape. 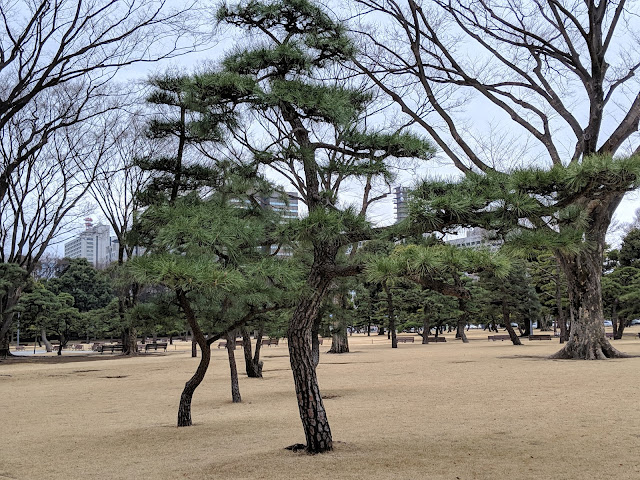 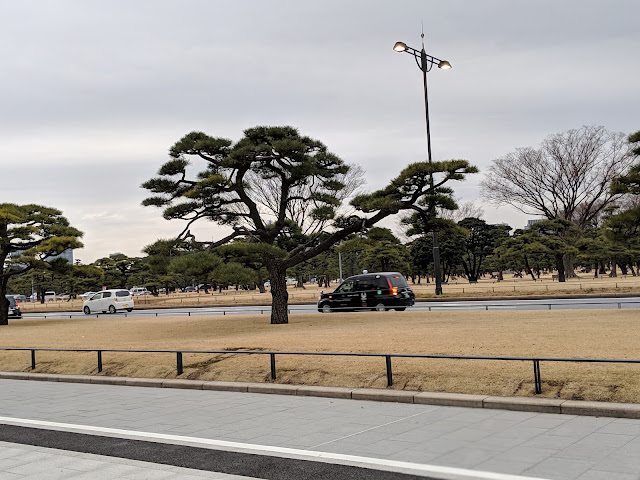 They've pruned these trees to show quite a bit of structure and pushed the cluster of needles off into what I'll call 'pods' near the extremities of the limbs/branches.  I think that if left to their own natural shape, some of these trees would be much fuller and have needles that cover the majority of the shape.

In my post a few weeks back where I covered the ten most important things on my gardening to-do list, I didn't talk about pruning a conifer, but now I'm wondering if I should be thinking about bringing this interesting Japanese-garden looking pruning to my garden/backyard?  Maybe there's a way to think about this in a smaller way like the Hollywood Juniper that I've been dreaming about?
backyard inspiration conifer trees garden inspiration Ginza Imperial Palace japan Japanese Gardening juniper trees landscape inspiration pruning tokyo tokyo trees
Location: Imperial Palace, 1-1 Chiyoda, Tokyo 100-8111, Japan