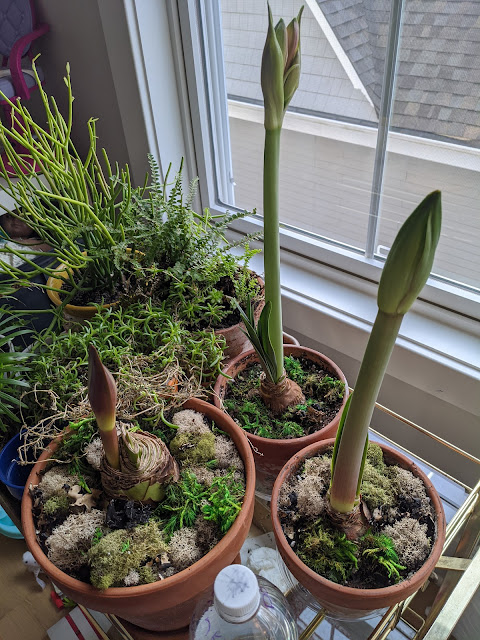 Yesterday, I posted some photos of the four-bloom Star of Holland Christmas Amaryllis and how it has given us some really nice red and white color flowers in the week leading up to Christmas.  Today, you can see the other three bulbs.

This is now the fifth post1 on these bulbs as a group for the season.  Starting with the original post in this year's (2019) series of Amaryllis bulbs that shows off all four of the containers.

Then, by the end of November this Star of Holland had gone far ahead of the other ones.  Once the bud emerged, I switched to a diluted alcohol/water mixture to try to stunt the height on the stalk(s).

And, on December 11th of this year, I shared photos of the Star of Holland about to unfurl and show off for the Christmas season.

And yesterday (as I mentioned in the lede here), was the full-show of the Star of Holland.

As for the other three bulbs, let's look at where they are in the photo at the top of the post.

If you look closely at the Apple Blossom, you'll see the flowers about to emerge.  See below for a closer look.  We have four days and I'm thinking...that we'll get a Christmas Day bloom!  That would be really fun. 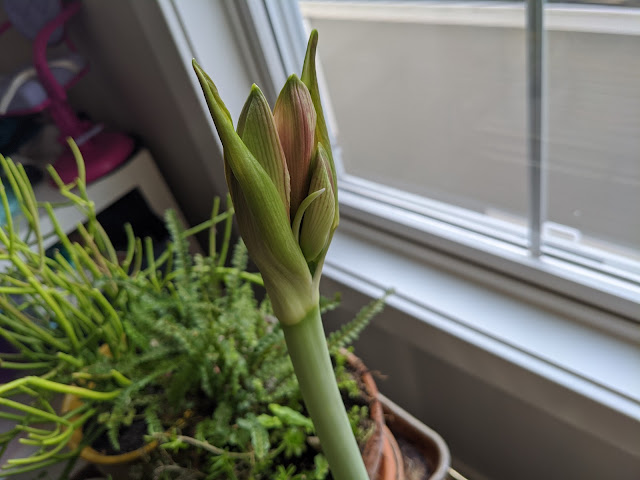 As for the Cherry Nymph Amaryllis, the bud has emerged and is big, thick and strong.  There's another one peeking out of the base that should come up shortly.  The color on the bud is a pretty purple, but it is still just a little thing and hasn't shot up vertically that much.  See below for a close-up of the Cherry Nymph in the midst of it's growth. 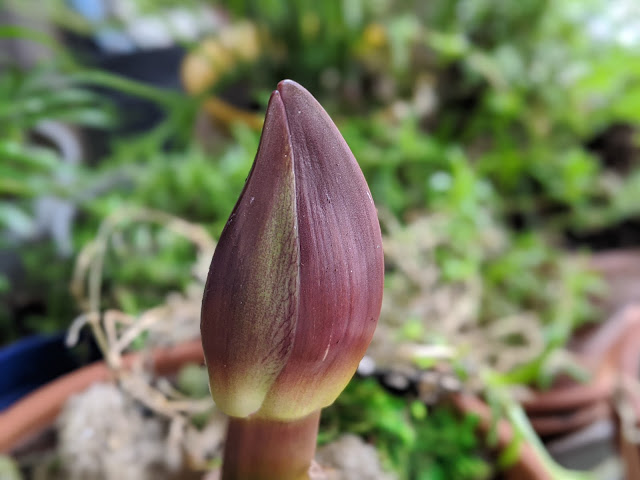 What is most interesting to me based on tracking these is that the Menards bulbs performed just fine.  We're now 3-out-of-4 when it comes to getting the sub-five-dollar bulbs to bloom.  Our experience in 2017 with no growth from the Menards-bought bulbs may end up being an anomaly.   I also think that maybe next year, we can think about trying a larger, shallow pot with three or four Menards bulbs in it together to get a more impactful setup.

As for the Wannemaker's bulb, I think we just need to get it started even earlier or perhaps pick out a bulb that is showing some signs of growth while still in the store.  This one won't be blooming for Christmas, but I'm hopeful it'll get here before New Year's Day.

1. [Technically...this is the sixth post because I shared a photo of the Cherry Nymph bulb by itself. But...when we're talking about the 'group', we can call it five posts.]↩
Amaryllis bulbs christmas christmas flowers container gardening flowers
Location: Downers Grove, IL, USA