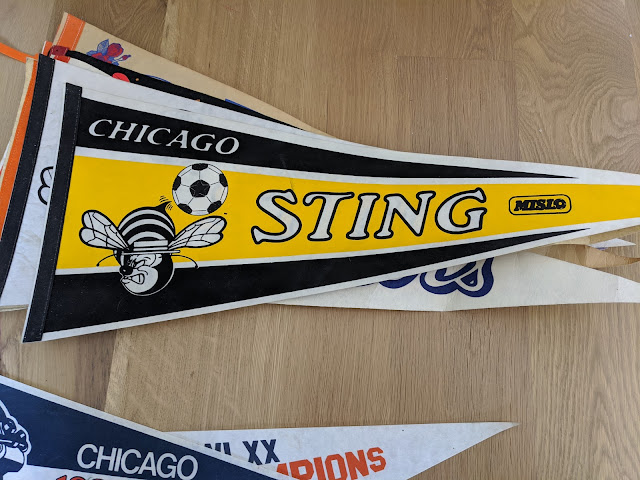 There are a few more vintage felt pennants from my childhood that my folks saved and gave to me when they moved out of our longtime home in Frankfort.  I've posted about a few so far:

First was the University of Illinois Fighting Illini Football Rose Bowl '84 pennant.
Then just a few days ago, I posted this awesome vintage Epcot Center 1982 pennant with Spaceship Earth and Mickey Mouse, Donald Duck and Goofy in their rainbow spacesuits.

Today's post is about a pair of pennants that I remember very well.  Both of these were on my bedroom wall.

First - at the top of the post - is a Chicago Sting pennant that is primarily black and yellow with the words 'Chicago' and "Sting' in white.  So, is the bee - he's black and white.  Turns out, his name was "Stanley Sting".  This has the MISL logo on the tip.

Here's the confirmation of Stanley Sting's name via a Google Search:

The second item for this post - you can see it below - is another Chicago Sting soccer pennant.  But, this one is different.  It is primarily white with the words 'Chicago Sting' in yellow with a black outline.  Stanley Sting, the little bee, is in yellow, black and white.  This, too, has the MISL logo on the tip.  But, there's one other (big) difference.  This white pennant features Stanley Sting holding a rose in his mouth. 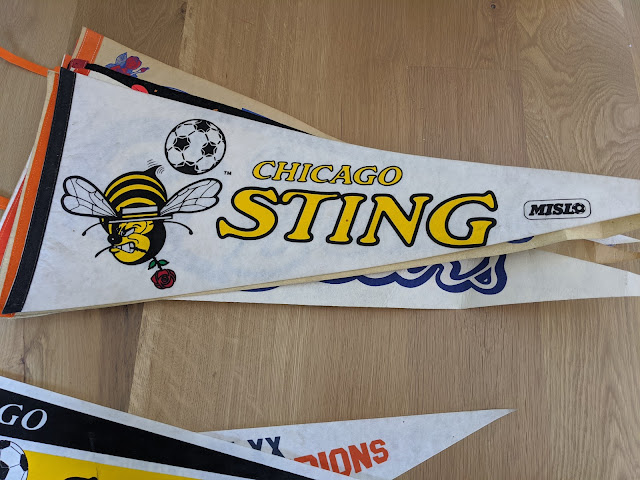 I have some strong memories of going to see the Chicago Sting play indoor soccer at the Rosemont Horizon (now named the Allstate Arena) in my childhood.  I don't really remember seeing them play anywhere else, though, so I'm not sure if they sold the non-rose pennants one year and the rose-adorned pennants the next season.  That's my guess.

The history (over at FunWhileItLasted) is interesting as they started as an outdoor team.  And...won the North American Soccer League (NASL) championship in 1981.  And they were a B-I-G deal in Chicago it seems.  From - yes...again - FunWhileItLasted:


In September 1981, a new record crowd of 39,623 came out to Comiskey Park on a cold Monday night to watch the Sting eliminate the San Diego Sockers in Game Three of the playoff semi-finals. The win sent Chicago on to Soccer Bowl ’81, the NASL’s championship match. They would play their arch rivals, the Cosmos, at Toronto’s Exhibition Stadium on September 26, 1981.

By 1984, the league folded and the Chicago Sting became an indoor-only team.  This is about when I started to pay attention.  I played indoor soccer during my youth and LOVED IT.  Might have been my favorite sport to play.  I posted this photo back in 2016 of our indoor team.

Back to FunWhileItLasted for the indoor history - including the move to the Rosemont Horizon (when I picked up these pennants):


By the time the Sting moved permanently indoors in the fall of 1984, the club’s moment was already in eclipse. The team finished with a strong 28-20 record and averaged over 10,000 fans for the final time. But a pair of 1st round home playoff losses to the Cleveland Force drew small crowds. The following season the Sting finished with a losing record and the team fired Willy Roy after eight years and two championships. Attendance crashed by 30%. After the 1985-86 season, the Sting left Chicago Stadium for the suburban Rosemont Horizon, citing the deteriorating neighborhood around the Stadium and their belief that the team’s core audience lived in the suburbs. Attendance dropped a further 20% during the Sting’s first season at the Horizon in 1986-87. Karl-Heinz Granitza was suspended for insubordination in early 1987, ending his nine-year run with the Sting.

(emphasis, mine).  That's when I was going to the games - thanks to my Dad's longtime buddy/partner Joe Levy and what I *think* might have been a connection through his architecture firm who secured us the suite (or...as we called it the...a "Skybox") at the Rosemont Horizon.

One other thing stands out to me about the Chicago Sting:  it was a guy named Karl-Heinz Granitza.  He was their star player.  And my friend Steve Blocker worshipped him.  When I found these pennants, I immediately texted both Steve as well as my other childhood soccer friend Neil (Old Ironsides) to share. (For those following along at home...both Steve and Neil are seen here a few years ago.) Steve mentioned this Chicago Tribune story about how one day back in 1991, when he was seemingly in financial trouble, he just got up and vanished.  Crazy story, worth the read.
Chicago Sting childhood lincoln-way soccer club pennants soccer vintage finds vintage pennants