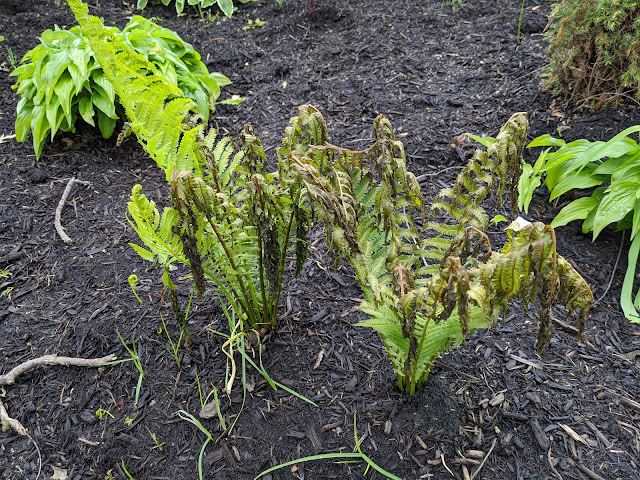 Over the weekend, we experienced a mid-May late (and hard) frost.  It has been cold for a few days (some are calling it a polar vortex) and it sure doesn't feel like Spring around here right now.  We had ample warning on the frost - the local news was talking it up for a few days - so I sprung into action and tried to cover/protect as much as I could.  Anything that was budding/on the edge of flowering, I tried to protect.  That means the Rhododendrons and Disneyland Roses were covered.  I also covered our new Hellebores (that I seem to have failed to post about) and even attempted to cover *part* of the Japanese cherry blossom tree that was/is mid-bloom.

But, I have far too much to cover everything and it seems that I've learned a lesson here:  the newly emerged, unfurled tips of Ostrich Ferns are far too delicate to deal with a hard frost.  See the photo above - these things were hit pretty hard.

This pair of ferns is located just to the west of the Gold Cone Junipers.  I'll see how they fare the rest of Spring for the Garden Diary.
backyard ferns fost frost damage garden diary ostrich ferns
Location: Downers Grove, IL, USA