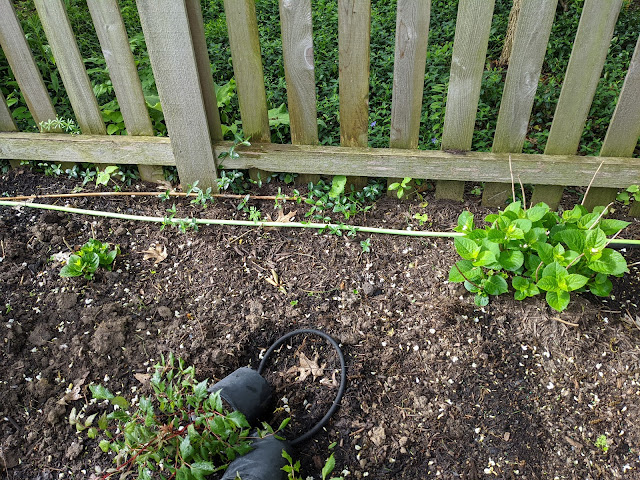 This is an early June look at a pair of hydrangeas - on the left is the smaller Everlasting Revolution Hydrangea.  And on the right is our Tuff Stuff Hydrangea.  At the bottom of the photo are a couple of still-nursery-potted Fanal Astibles that I put on the soaker hose to keep from drying out.

The last time I posted a photo of these two hydrangea was last September (2019), when they were still green and happy.  They did NOT flower last year.  In terms of size, the Tuff Stuff is/was bigger in September - after a full season of growing - but not by much.  So, I'm hopeful that we'll see that one continue to grow up.

Before that, I posted a photo of these two in August of 2018.

And right about two years ago, I posted photos of both the Everlasting Revolution (it was barely green) and the Tuff Stuff (has always been *ahead*).  They were planted in October of 2017 and were shipped to us by Nat's Mom as an anniversary gift.  They were small.

That means, we had the 2018 and 2019 growing seasons.  This is their third.  I'm surprised that they haven't grown to be sizeable yet, but maybe this will be their "LEAP" year?

I have done no pruning, and you can see the Everlasting Revolution grows anew each year.  The Tuff Stuff on the right has 'old wood' still there.  Back in this post, I discuss that neither seem to need pruning.