Posted by Jake Parrillo on May 03, 2020
This is the third in a series of posts all addressing some transplants that are now in what I have been calling 'Priority Area 2' between the Hornbeams and the Oak tree swing.

First was this post showing some hostas being added under the Hornbeam hedge.
Yesterday was a photo showing four transplanted hostas under the Oak tree and Flowering Pear.

Today I'm showing a recently transplanted Ostrich Fern that you can see in the red circle below.  This is in the area between the Oak tree - swing tree - and the River Birch tree.  It came from the area in the yellow circle where there are a series of "Survivor Ferns" that I first documented in April of 2017 while our house was still being constructed.

In the blue circle below, you can also see another hosta that was planted around the large Oak tree. 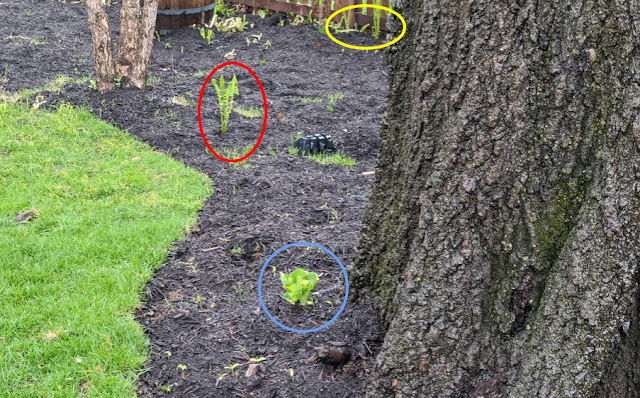 The plan calls for eleven (11) Ostrich Ferns in this area - so I have more transplanting to do.  You can see some grass poking through the mulch in this area as it was a section of turf that I recently converted to beds.  I removed as much of the sod as I could, covered other parts up with cardboard, but there still is grass poking through in parts.  I'll work to remove it over the coming months of the summer and I'm thinking that I'll get another delivery of mulch - like 3 yards or so - later this Summer to 'top' off our beds once all the planting is done.

Add up to 12 hostas.  Transplanted six so far.  Want to get the spec'd Hadspen varieties for balance.
Add 11 Ostrich ferns.  Transplanted one so far.  More work to do here.
Remove some turf and extend the bed.  Mostly done.
Add mulch to the new area.  Done and done.
Add a Viburnum or two.  Not yet.
Add 5 Bottle Rocket Spiked Ligurlaria.  Nope.
Add rocks/boulders around drain.  Nope.

If I get a few more ferns here and some rocks/boulders, I think I'll give myself an A minus.  As it stands now?  A solid B.
2020 to-do list backyard beds ferns garden diary landscape priority ostrich ferns survivor ferns teardown ferns
Location: Downers Grove, IL, USA