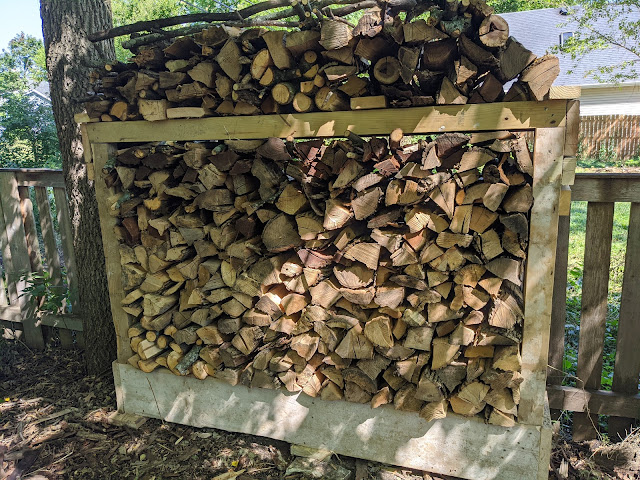 A few days ago, I showed off some photos of a firewood rack that I built from scrap lumber in anticipation of our annual Fall firewood order.  In that post, I mentioned that I had some additional scrap lumber around (some treated, some not) around to build a few more racks.  This post, shows at the top another rack that I built from the same basic plans.  The photo above, shows this second DIY firewood rack that I built and placed along the fence in the far back part of our yard.  It is holding just about a face cord of mostly Ash and a little bit of Hackberry/Osage Orange firewood that I acquired form next door in December of 2019.  I started processing the rounds and by March of this year, had the wood stacked on itself along the fence.

You can see that firewood stack in the post here.  It was fine.  But, it was mostly laying on the ground and I thought I could do better.  So, I took the lumber and got started.  The bottom ledge in this version is large - a 2x10 and I had enough to make this rack a little sider than six feet total.  Then, using 2x4's, I put the rest of it together.  I didn't put a roof on this one, but instead am using the space above it to store even more wood from laying on the ground.

I also attached this one to the fence - using a series of 3" deck screws so it won't topple on anyone as I know my kids love nothing more than to tug at stuff like the wood in this rack.

A few things of note here for firewood consumption.

1.  This isn't ALL of the firewood back there, but I'd say is about 80% of it.
2.  If you look closely at the wood on the VERY bottom left, that's fresh stuff from the front yard Maple from last week.
3.  I've started to tuck-in and place some medium-sized branches in/on this rack. These are from around the yard and aren't something that a firewood supplier would be bringing, but I'm sure that we will burn them once they seasoned.

The wood here was standing dead in the Ash trees, but now has been processed and split for more than eight months - making it potentially ready to burn this year.  But, my plan is to hold out on this wood until the Spring/Summer of 2021 when it will have more than 12 months of seasoning in it - and now that it is up off the ground, I'm hoping that the drying/seasoning will be accelerated.
Ash firewood diy projects firewood firewood consumption firewood planning firewood rack lumber projects
Location: Downers Grove, IL, USA