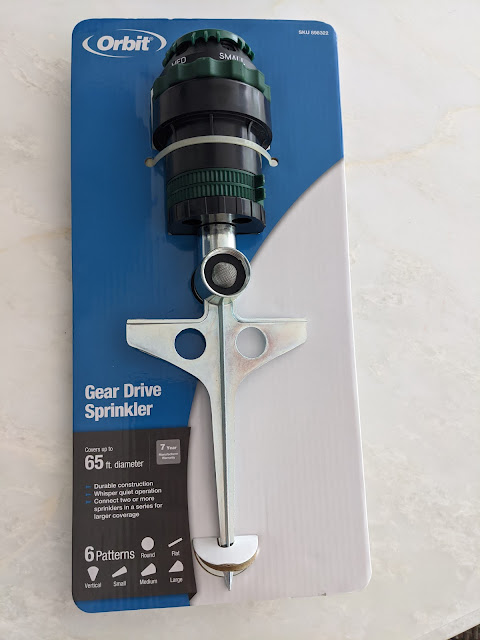 I've thought about an in-ground irrigation system for the past few seasons and went so far as to get a quote from the guy that Chris at Green Grass recommended (Phil's Irrigation).  We have been talking about a zoned system that covers our grass, our perennial beds and even some of the containers on the front porch and back patio.

But, in the mean time, I've been both hand-watering, soaker hoses and using various sprinklers to try to keep things alive.  In the front, that's been - exclusively - via an impact sprinkler on a spike.  And, it has worked pretty well.  But, we're on the third season of the impact sprinkler and between using it a lot and the wear/tear that comes with it being on the end of a retractable hose, it started to have a bunch of leaks and the pressure wasn't strong enough to have it complete a full evolution.

In the back, I've used that same impact sprinkler and a multi-pattern stationary sprinkler.  That one was, too on the third season and it just fell apart at the connection.

They both were fine.  But, I wanted to try something new.  I checked the Wirecutter for their recommendations, but didn't go that route.  They recommend a couple of Melnor 'back-and-forths' (that's what I call them at least) and a cool compact oscillating one.  But at $54 and $61, they were pricey.  And, I have a Melnor 4-way Bluetooth timer in the back that is fine, but the app is super wonky.  So, I'm a little gun-shy on Melnor right now.

Instead, I dug around and found this gear-drive Orbit Sprinkler that Home Depot seemed to have the lowest price.  I was attracted to the six-pattern head, the fact that it is 'whisper quiet', that you can connect multiple together in a daisy-chain and that it came on a simple spike.  All for less than seventeen bucks.    I've had a different Orbit product - here back in Elmhurst in 2012.  Seemed to be fine, iirc.

Unfortunately, my local Home Depot was sold out, but I found it at a store that we could run to on a visit to Wisconsin.

I bought two of them - one for the front and one for the back.  And, depending on the situation, I'm thinking I can, indeed, tie them together.

For now, I'm going to work our front turf hard with water over the next week or so. We were out of town for an extended period of time and the whole thing looks very stressed.  Other parts appear to be headed into dormancy.  So, not good.

But, I'm thinking this Orbit H20-6 run in a few spots each morning for five straight days is going to give me the best shot at bringing things back and under control.  Will report on the outcome in the coming weeks.
home depot lawn lawn care lawnnut Orbit sprinkler sprinklers turf watering watering system
Location: Downers Grove, IL, USA