I mentioned in yesterday's post about the new set of two-toned Frances Williams hostas that Nat also brought home some other shade-loving plants from her trip to Costco.  The next set are also hostas, but this time there are two bags of them and they're blue.  Officially: 18 Bressingham Blue hostas. 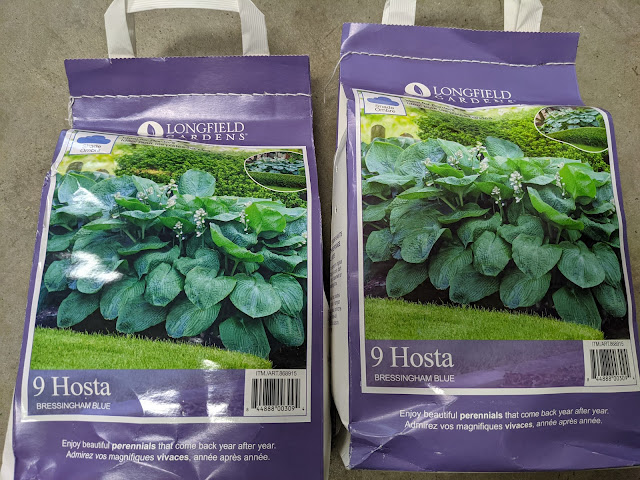 Here, below, is a look at the back of one of the bags that details 40" spacing and hardiness (down to Zone 3). 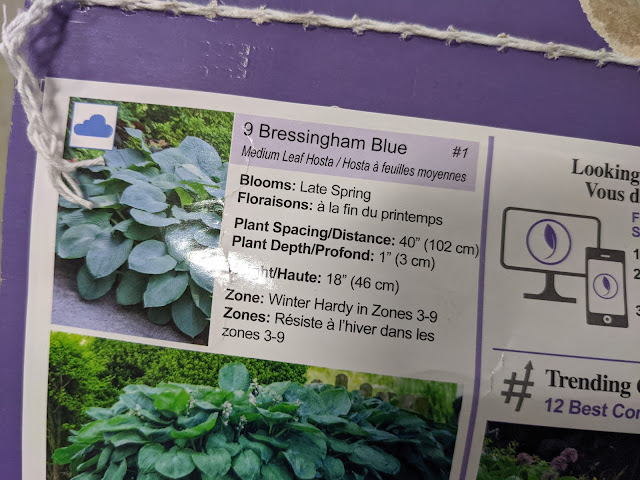 It turns out, I've bought these before and have some of them in the yard.  But, I'm not sure, exactly.  In 2018, I bought a (then) 10 pack of them and stuck them in the ground somewhere and didn't document the locations.  Having good photos of mature Bressingham Blues now (thanks to this bag), I'll have a look around late Spring and see if I can pick any out.  I'm thinking that they went in on the north side of the house, but will effort to identify them.
Back to what these are....
The Chicago Botanical Garden has a page up about Bressingham Blue Hostas that tells their story:

Bressingham Blue forms a giant (2½ feet tall by 4 feet wide) mound of thick, blue-green leaves with a somewhat upright habit. It blooms with white flowers in mid summer. It is a sport of Hosta sieboldiana 'Elegans.'

But, where to put them?
There are a few posts that need hostas and some spots that call for blue ones.  So, let's build a list.  Oh, wait...I did this very thing - identify spots for hostas - last year.  Here's the list that I came up with (then):
1. Front yard bed - *behind* the existing hostas there (layered on top of the tulip bulbs). I can see three or four plants there.
2. Underneath the Oak Tree - around/near the mini one mentioned above. What I had been calling Priority Area #2.
3. Right on the corner of the screened porch. The plan calls for a pair of hostas there.
4. Priority Area #3 - which calls for some hostas, but due to the Yew Hedge that I planted would require a slight audible.
That list is a good start.  But, there are four other spots that are on my radar RIGHT NOW.
5.  Priority Area #2. Calls for 8 Hadspen Hostas.
6.  Per the plan - there's another spot calling for 6 Hadspen Hostas that lies in front of the Hicks Yew hedge helping define one of the corners.
7.  And, finally, the plan calls for me to extend the Hornbeam bed out about two feet and add a row of alternating hostas in front of the ones that are currently planted there.  Needs four or five.
8.  Underneath the espalier Lindens.  I transplanted 1.5 there, but could these round out that area?  Or, at least park them there in a more visible way than around the porch?
My gut tells me to start by solving for #5.  Leaves me with ten remaining.  Then, #6.  Leaving me with four left to place.  And, the logical place - if I can get the beds extended would be #7.  It is the most visible from the patio and would have the most impact.
I'd like to get there in the ground soon, but I feel like I have to get going on shaping the beds before I do that.  Hmmm....that's for another post.
costco garden diary Hostas landscape priority perennials shade gardening
Location: Downers Grove, IL, USA