This is the third in a series of four posts based on the garden things that Nat brought home from Costco recently. The first one was a set of Frances Williams hosts for the backyard.  The second was two packs of Bressingham Blue hostas that are destined, too, for the backyard.   3rd post.  first two hostas.  Today is another shade-loving perennial that pairs well with hostas that we got started with last season.

And that would be astilbes.  Here's the bag of six Gloria Purpurea Astilbes (below): 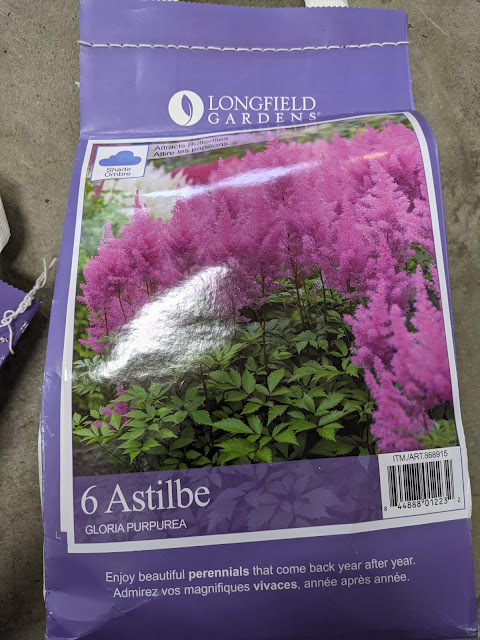 And, here's the back of the package showing a 20" spacing requirement and saying they get about 24" tall. 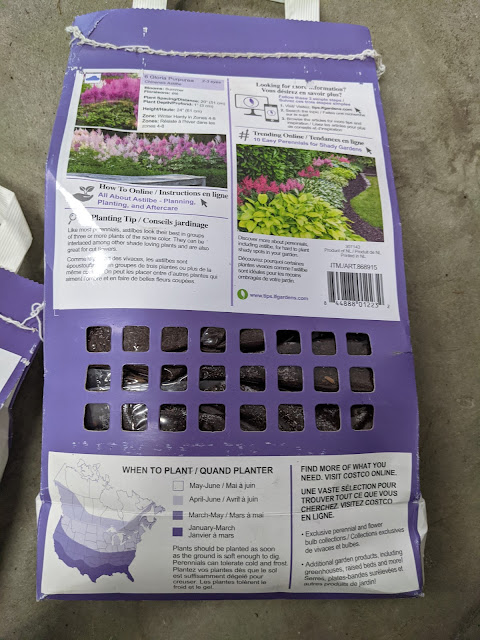 As I mentioned earlier, we started with Astilbes last year - buying 12 of them and planting them in June.  Timing was off and some of them suffered some transplant and drought stress, so I'm not certain how many made it, but it isn't all twelve.

The area where we planted them - on the southside in front of some new Oak Leaf Hydrangeas - calls for 15 of them total and wants them planted in a somewhat staggered fashion.  Let's say that nine of the twelve survived from last year and come back.  That means if I add these six, we'll be right where we want to be in the end.

However, these are a different color than the Fanal Astilbe that we have on hand.  Those are a little bit more red or maroon in color.  These are, well, purple.   Cornell has a page up that details all the varieties of Astilbe that one can find in the garden here.

But, in facing the planting of these astilbes, I am dealing with two things:

1.  Location.  The bed that I planted last year's in is far too small and needs to get extended.  That means that I'm going to have to transplant all of the survivors a little further out.  They're too close to the hydrangeas.  Frankly, the staggered front row of the hydrangeas might be too close to the backrow, but, baby steps, right?

2.  Color combination.  I've learned my lesson and turn to Amy at Pretty Purple Door when it comes to color combinations. Go read her piece on the color wheel and you'll learn so much.  It turns out, one of the combinations that passes her test is Red + purple.  So...(sigh), I can plant these together.   (one other quick note...Pretty Purple Door also has a plant pairing guide (find it here) that happens to list Astilbes + Hydrangeas - so we have that going for us.  Check out page eight - which also has a little boxwood showing in front of the photo - which is interesting.  Maybe that's something to consider?

The sad reality?  I've tried my hand at shaping my garden beds.  And they look hack-y.  Which, I'm not going to admit NOT being hack-ish.  At least when it comes to swooping curves in landscape beds.

I think I need to call in a professional.