One of the trends that I'm really enjoying in Disney Parks is the additional of some restaurant-specific Disney Parks ephemera in the shape of custom coasters.  I've documented a few of these over the years here on the blog as part of the Coaster Collection.   The last Disney one that I posted was back in 2019 when I shared one from Aulani.

This post is about some coasters from Oga's Cantina in the Black Spire Outpost on the Out Rim planet of Batuu.  Or, you could say it is located in the Star Wars Land inside of Disney's Hollywood Studios in Florida.  Either way, you'd be right.  And, if you're interested, check out the full story on the place here on the Wookiepedia.

As for the rest of the Disney-related coasters in the collection, here's the rundown of the (now) 13 kinds1.

The full Disney list includes:
1. The standard one you see in your rooms @ Walt Disney World resort hotels.
2. This black and white one from the original Disneyland Resort Hotel.
3. This *new* Walt Disney World resort hotel version that updates the look of #1 above.
4. One from the Irish pub Raglan Road restaurant in Disney Springs.
5. From inside the Magic Kingdom comes this one from the Skipper Canteen.
6. Right outside the Boardwalk Inn Hotel is where we got this coaster from the Flying Fish restaurant.
7. Back in Disney Springs, I found this one from the Boathouse.
8. Back on The Boardwalk is this one from the Abracadabar.
9. Down in the bowels of Disney Springs was this one from Enzo's hideaway.
10. A 'found' coaster from the Contemporary Resort long after a trip there.
11. This post about the Lamplight Lounge at Pixar Pier - which features six different backgrounds. But, I'm considering it just one coaster for record-keeping purposes.
12. A logo-themed coaster from Aulani - A Disney Resort and Spa - in Ko' Olina, Hawaii.
13. These Oga's Cantina coasters from Black Spire Outpost on Batuu.

A quick spin around the Web turns up the fact that there are actually six different Oga's Cantina coasters.  Similar to the Lamplight Lounge coaster set (with six), this post will cover the ones I have on hand.  A full look at all six Oga's Coasters can be found here.  And that's where I've sourced my information.

The first two are the Yub Nub Coaster and what is called the "Bloody Rancor Imported From Tatooine" Coaster.  Cute and crazy. 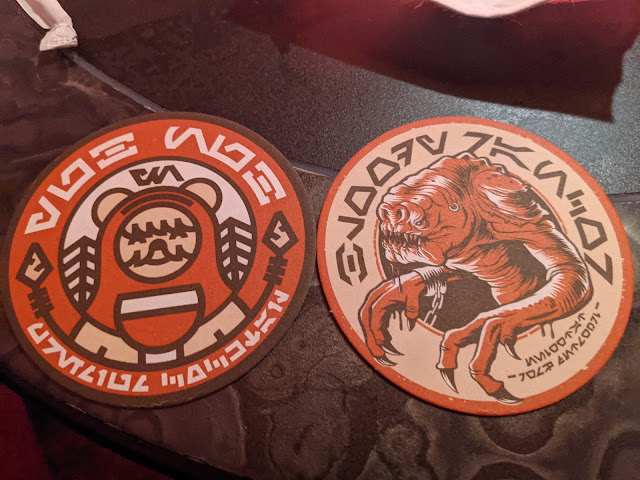 The other two that we had at our table are the Blue Bantha coaster and the "Beverages Music Food" coaster.  (again, the names come from Geek Carl here) 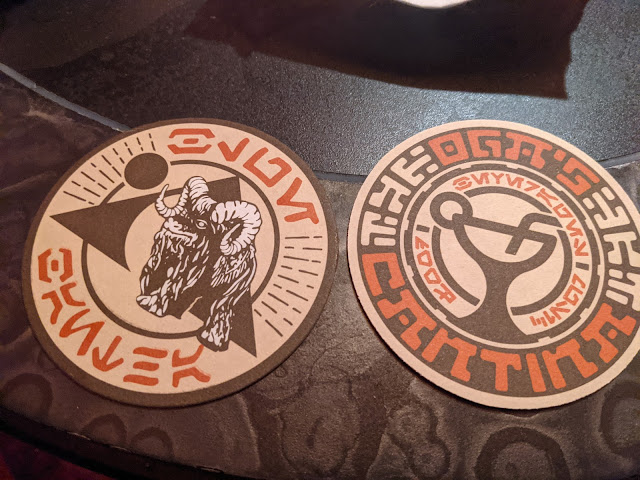 I brought home at least one or two of these (I'm pretty sure) and they'll take a post on my desk holding down my coffee mug in the mornings.
1. [For now, let's just operate under the belief that despite there being more than one kind of coaster shown here, there's just one kind.]↩
batuu black spire outpost coaster collection coasters disney Disney Ephemera hollywood studios Oga's Cantina star wars wdw
Location: 351 S Studio Dr, Lake Buena Vista, FL 32830, USA