We have a pair of dwarf Umbrella container plants that Nat has had around the house for a couple of years.  One of them had prime placement on our kitchen table.  The other was neglected up in our spare bedroom between last Summer (2020) and this Winter (Jan/Feb 2021).  The one on our kitchen counter has been something we look at all the time, so I've been pruning it pretty regularly by lop'ing off the tips to try to push some new side growth.  Properly known as Schefflera arboricola, that particular Umbrella plant is thick and full from a few inches off the soil all the way to the top.  The pruning has worked.

The other one - the neglected one - was shaped like a lollipop.   It was angled and top-heavy.  The first thing I did was to dig it up, transplant it and straighten it out.  Then, I began to prune it.  All from the top, hoping that it would push out some new growth further down the trunk.

Here's a post in mid-Feb where I did the first top-prune. And, just a week later, I noticed some action lower on the trunk.  There were, seemingly, some new nodes that had popped out.  A month later, I pruned the top off again.  Hoping to push out more new growth.  The little nodes stayed the same size.

With longer days here during the Summer, what did I see on the trunk this week?  New growth.  New limbs coming out from those very nodes that were birthed earlier this Spring.  See below for a couple angles of both of these new limbs. 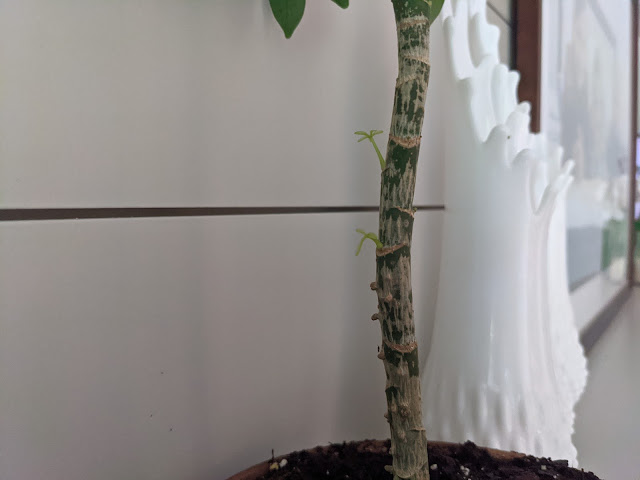 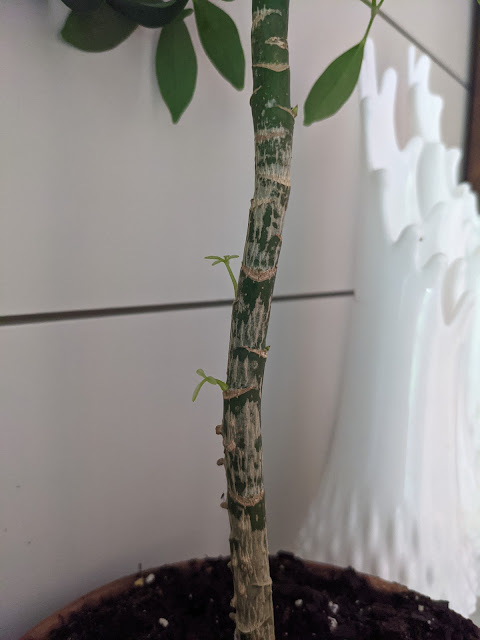 They're tiny - for now - but I'm excited to see them fill out and add some thickness to the trunk and some body to the tree.  It took four months plus a couple of weeks from the first top prune to these tiny new shoots to emerge and begin to leaf-out.  I'm surprised at the pace - aren't you? I was assuming that I could drive out new trunk growth WAY faster.  The top grows way faster.  Prune off the top and it will show new growth within the month.

I'll baby these two new limbs for the rest of the Summer and keep top-pruning to give them a little bit more help.

BTW...for those keeping score at home (nobody but me), #9 on my 2021 to-do list was to get going on tropical bonsai.  I mentioned having a little focus on these existing Umbrella plants, so I'm crossing that one off my list.