One of the things that I'm always struck by during our visits to the Disneyland Resort is the Disney horticulture.  I guess that I always look at a 'place's' horticulture, but when I'm at Disneyland, I always come away thinking how great of a job they do - AND - how foreign it is to me being a Zone 5b Northern climate gardener.

I've posted a bunch of photos over the years from our trips here on the blog including some photos of the Disneyland Roses, some crazy cubed shrubs near Small World and a few times about some Belgian Fence espaliers that they have in the parks.  I first posted a photo of this Belgian Fence in January of 2019.  Then, I posted about Disneyland's Belgian Fences later that same year.

Below, you'll see a new photo of what I think is the 'matching pair' to the espalier that I've posted about before.  This one is on the City Hall side of the train station - just as you go under the sign that reads:  "Here you leave today and enter the world of yesterday, tomorrow and fantasy"

I've posted about a couple of those signs, btw.  Here's a photo of one at the Magic Kingdom down at the Vacation Kingdom at Walt Disney World in Florida.  I also posted a photo of the same sign at Disneyland Paris - but that one reads slightly different.  First, it is in both French and English.  But, the english reads:  "Here you leave today and enter the worlds of history, discovery and ageless fantasy."

Couple of quick notes.  First, there's a period at the end of the Disneyland Paris welcome sign.  Second, they use the plural "world(s)".

Ok, enough about those signs.  Back to the Belgian Fence. 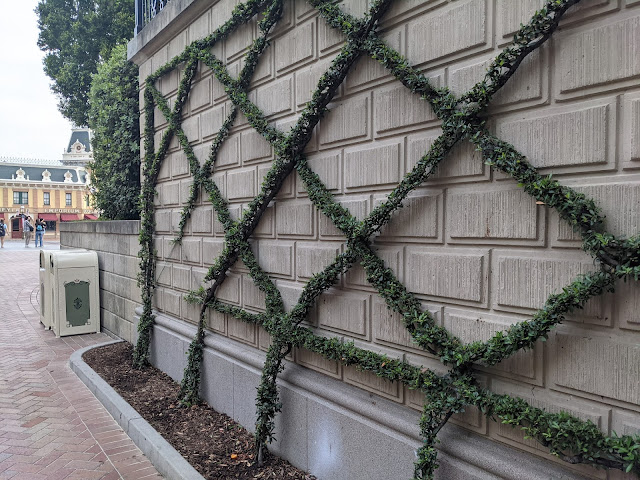 This one is made up of five stems - spaced pretty far apart.  That's one of the mistakes that I made when I planted my initial Belgian Fence: they're too close together.  Something that I need to fix if when I plant another Belgian Fence espalier in our backyard.   Another note - five stems, spaced far apart, provide for a dramatic diamond pattern, but they don't provide a lot of screening.  You get two diamonds tall and four diamonds wide in this very large space.