One of the items on my early Fall garden task list is to divide up some of my hostas.  I usually do this in Spring and I think that causes many of them to be delayed a bit and not reach their potential in the growing season.  I've read around and it seems that there's mixed views:  some divide in Fall.  Some in Spring.  So, that's what I'm going to do:  divide some in the Fall.  After having divided a lot in the Spring.  Seems like the month of September is the month to divide.  I figure I'll give these a go right after Labor Day.  Cooling temperatures, but still enough time to establish themselves before going dormant with Winter.

Here, below, is an inventory of some of the hostas that I think are ready to be divided.  By my count, there are 9 eligible specimens.  Dividing these will give me nine new plants to add to the beds.  For no cost and just a little bit of effort.  What's not to love about that?  Oh...transplant shock, you say?  I suppose there's that.  The promise of even more hostas seem to outweigh the risk of setting these nine hostas back with stress.

First, a medium-sized hosta that is along the north side of our house - by the firewood racks. 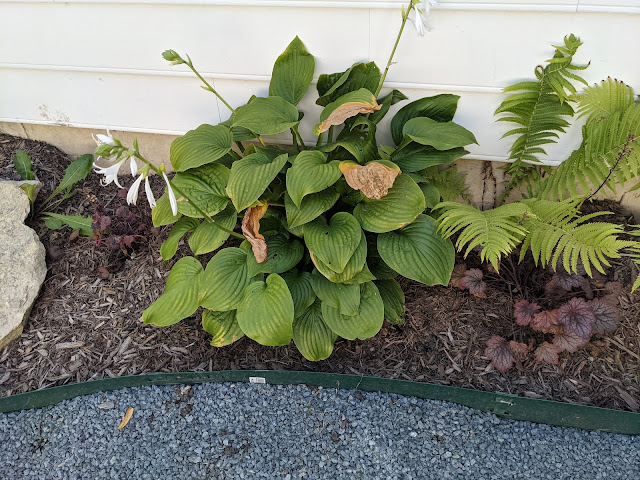 Next - below - are a pair of Bressingham Blue hostas outside our screened porch.  These need to be split up into four from two.  These were planted in 2018, so they're in their fourth growing season. 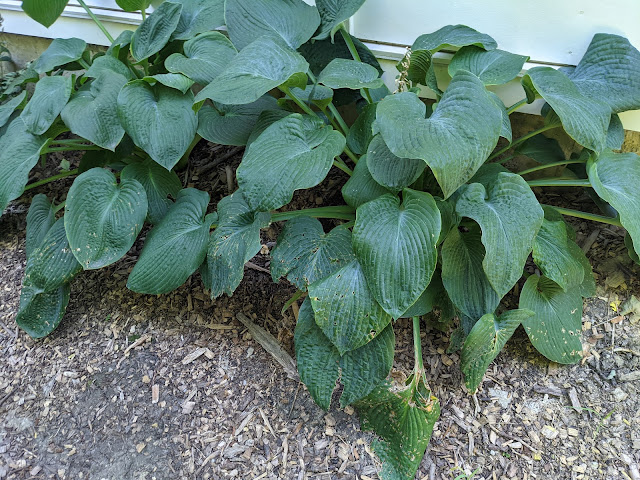 I have this teardown hosta lingering back in our wood pile.  Seems like it should get a new home. 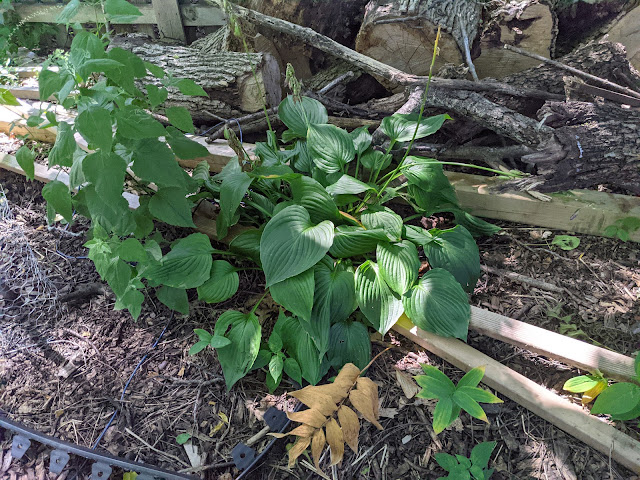 A couple of my Guacamole hostas are big and healthy.  They're in various places. There are others, but I'm going to be picky in dividing them at this point. 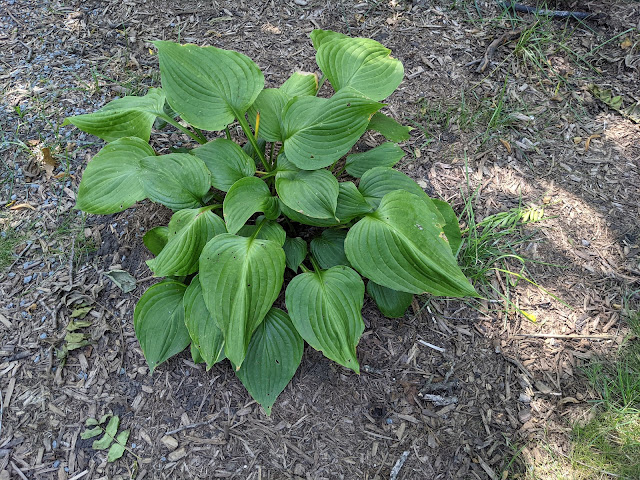 This one back by the firepit can probably be split in two.  I could use more in the firepit border.  Dividing this one is a way to do just that:  add to the border. 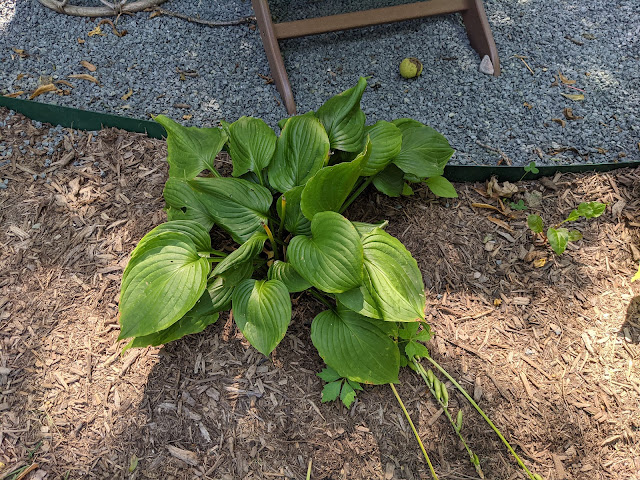 This one, below, is in the new south bed/border and is mixed in with some Lancifolia hostas.  I don't love the Lancifolias, but I have tons of them. They're not going to be divided, but I'd like to swap them out over time.  You can see the difference between this one with white flowers and larger, wider leaves compared to the Lancifolias next to it in the photo below. 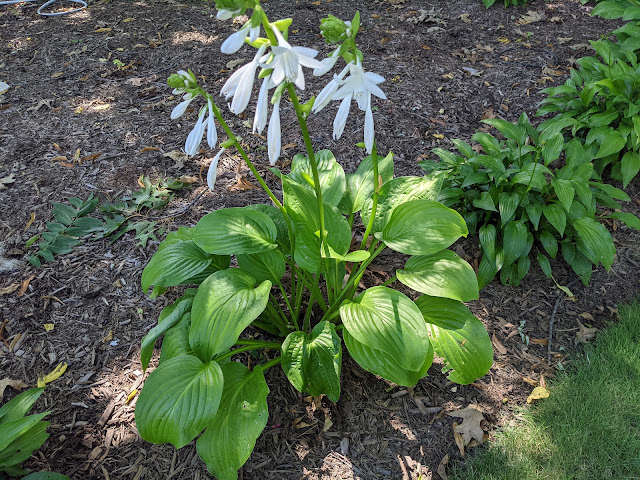 This one below is the Christmas tree hosta - with the thin white line around the edge.  I really like this one.  What's better than one hosta to enjoy?  Two. 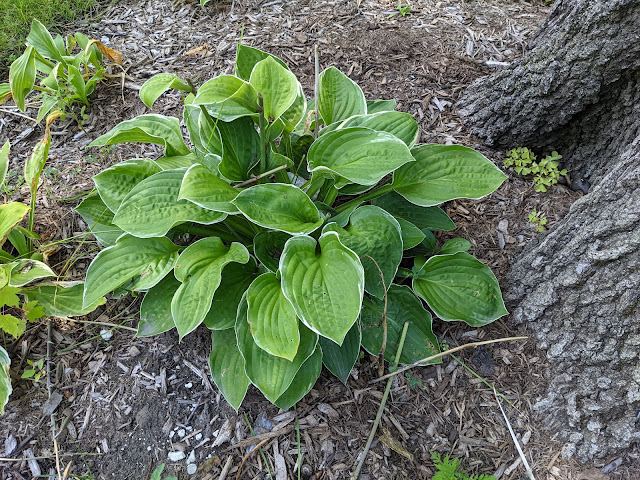 Finally, below is the Princess Tiara miniature hosta.  This one has struggled a bit.  If it recovers as the temperature drops, this is another one that I intend to divide to get even more plants. 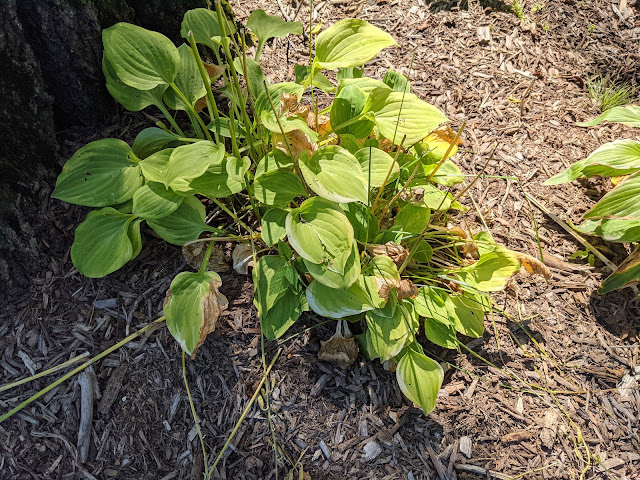