Posted by Jake Parrillo on September 29, 2021
September is a good time to divide some perennials in our growing zone - 5b - due to the cooler temperatures, the little bit of rain we get and the warm soil temperatures.  I have a few plants in our garden that were planted in 2017 that haven't been divided to date - so that's five growing seasons without dividing.  And, when it comes to some ornamental grasses, it seems that they do BEST when you divide them every three or four years.   My Fall dividing plan starts with these Karl Foerster grasses that were planted next to our driveway and our front way.  I just posted a photo of these grasses last week showing the trio of them being full and wide.  That's about their total, mature size.  Coupled with the fact that I noticed some 'center rot' this Spring, I knew it was time to dig these out and divide.
I started with the grass closest to our garage - you can see it on the right in the photo below:

I dug it up and divided it into quarters - with four sections to replant.  The largest one was the one I decided to leave in place that you can see in the photo above.  Comparing it to the other ones on the left, it is thinner, but I think in a healthier spot to grow over time.

Where did the other three sections go?  I transplanted them into a few spots around the front and south side of the yard.  First up, I put one underneath the Norway Maple tree that seems to kill everything underneath it.  I planted a Totem Pole Switch Grass under the tree earlier this Spring and it has done a fine job surviving this heat, so I'm (now) thinking that grasses might be a good solve under the tree.  Below, you can see one of the new Karl Foerster Feather Reed Grasses that I divided and transplanted: 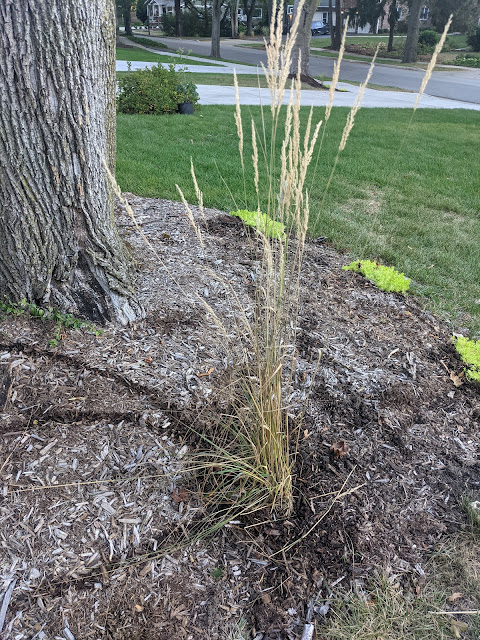 Next up, is the third section that I transplanted around the south side of the house, right in front of some plumbing that exits our house (sump and hot water tank fresh air intake/exhaust).  This part of the yard gets good sun, but not a ton of water. 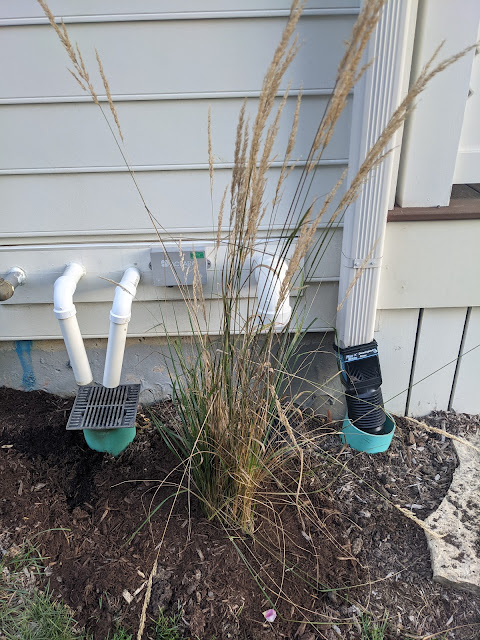 And, finally...the fourth section of this divided Karl Foerster grass went into the bed 'in between two driveways' right next to the pair of grasses that I bought and planted last Fall.  One of the rules of planting is to use odd numbers, so adding this grass corrects that mistake - by taking the grouping from two to three. 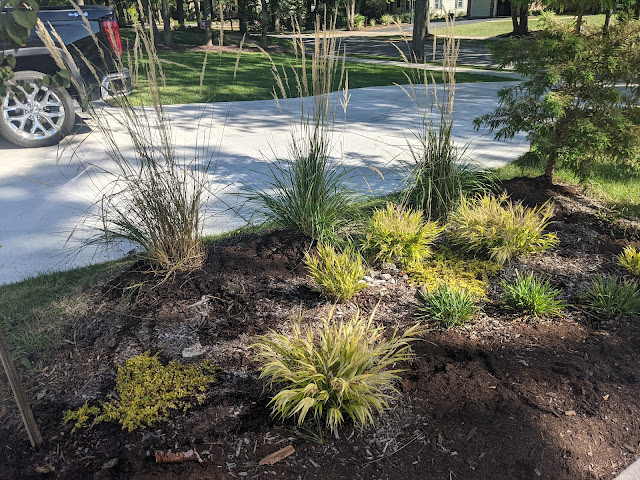 I have these Karl Foerster Feather Reed Grasses repeated a few times in our garden, including right outside of our kitchen window.  These were planted in early Spring 2018, so they have four growing seasons to put down roots and establish themselves.  It also means that they're right in the proper 'dividing window' for ornamental grasses.   There is a colony of five grasses here - two in front, three in back - that ALL can be divided.  I started with the front right grass by digging it out and dividing it.  You can see it removed below: 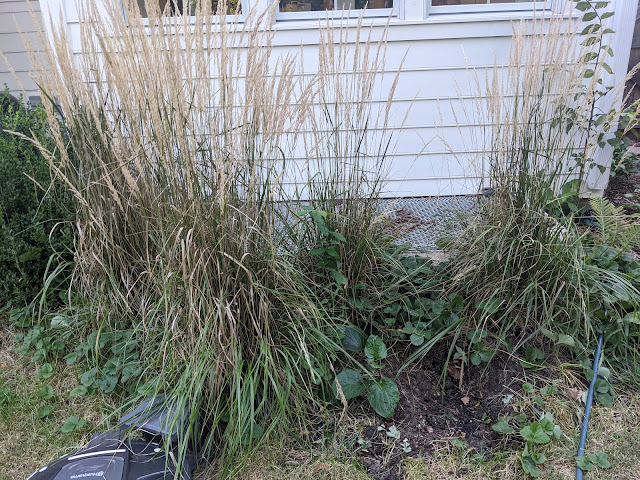 This one is a bit smaller than the ones up front, so I opted for a division of three - that you can see below: 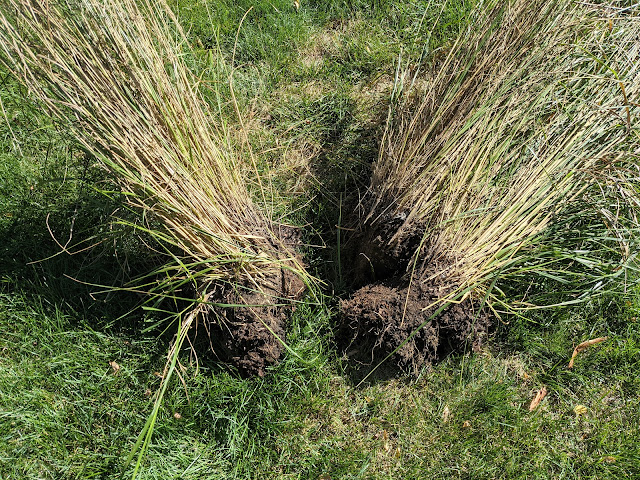 And, I transplanted all three of these over to the northside of the backyard - in between the Hornbeam hedge and the Cascade hops that I planted near the fence earlier this year.  These provide a little bit of vertical interest and well as winter interest in a spot that is right in front of the rainwater inlet drain. 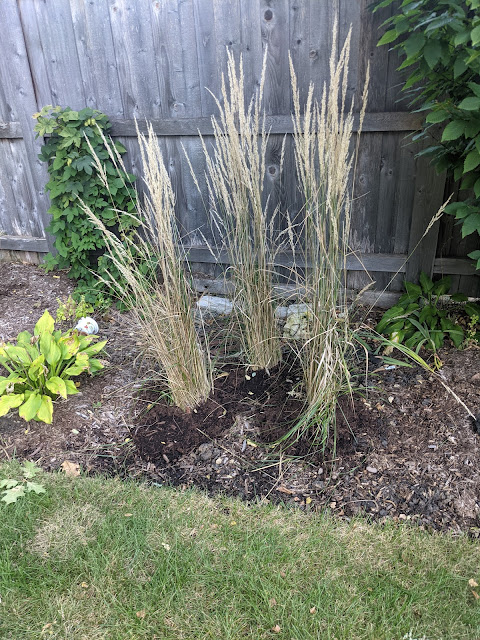 There are a number of ways that professional gardeners use ornamental grasses in the landscape and in their gardens - including the idea of adding new/different textures to the beds and to soften hardscape areas.  But, in my reading, there's another way to use them; and that's to add some cohesion to overall garden by repeating the SAME ornamental grass a number of times around the garden.  From BHG:
With this recent division and transplant, I now have these grasses in three spots in our backyard.  Two beds against the foundation and now this new one against the north fenceline.  See the red circles below.  In terms of other locations and adding repetition to the landscape, there are a few places (green circles) that I can tuck in these grasses.  The most notable is a potential new border right against the patio in the green circle.  This would provide that visual 'tie', I would think.

In terms of more 'free plants' this Fall, I'm thinking that if I dig up and divide all of the remaining grasses, I can re-plant the existing seven (2 more in front, five in back) and leave eight clumps of grasses.   I'll put some three of them around the corner of the patio and maybe two more (total of three) in front this Fall.  That leaves me with three that I can plant in one of the backyard beds to begin to create this cohesion through repeated colonies of Karl Foerster Feather Reed Grasses.
backyard dividing grasses dividing plants fall dividing feather reed grasses front yard garden design garden diary grasses ib2dw karl foerster ornamental grasses transplanting
Location: Downers Grove, IL, USA