A week ago, I finally had enough with a 'tough-to-grow-grass spot' in our front yard.  It a little section sandwiched on the 'in between two driveways' island and right up against the sidewalk.  My thought was that part of the reason that the turf goes dormant here every Summer is because the heat radiates off the concrete on two sides and just dries the area out.  And, that's certainly part of it.  Not to mention that I don't water it enough.  But, last week, when I cut this new little bed in, I also discovered that there isn't much soil here.  Just a little bit of top soil - like an inch or two - followed by mostly gravel.

After I cut out the edge of this little bed and removed the turf, I ended up dumping a few bags of compost in the area to thicken up the area and provide a bit more organic material to allow for things to root in and (hopefully) grow.

I then looked around to see if I had any plant material on hand that I could transplant into this area.  Needed some things that were drought-tolerant, able to live in full sun, and something that I could get to (I hope) quickly establish itself before Winter arrives.  I settled on cutting out a few patches of the Lemon Coral Sedum that I planted in our front porch border this Summer.  I started with some small quart containers that quickly spread up and out to create a sort of mat of sedum.  That's *exactly* what I wanted there - and was inspired by the Morton Arboretum entrance area - and that's *exactly* what we saw this growing season.

When I went back to look at that photo from the Morton Arboretum entrance, I realized that the conditions we're talking about in this new bed - surrounded by concrete, right in a higher-traffic area and full sun - were what the Arboretum was dealing with in their bed.

In went my new Sneeboer shovel.  And out came a couple of clumps of the Sedum mexicanum 'Lemon Coral'.  I stuck them in the area closest to the sidewalk and in the corner of the sidewalk/driveway.  I'm hoping that - with time AND care - this will spread out to make a sort of ground cover for this area. 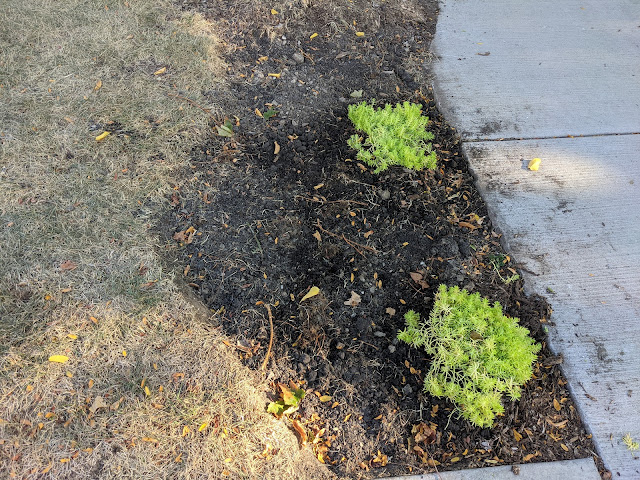 Now, you might be reading this and saying to yourself:  Self...who's Jake fooling here?  Sedum mexicanum isn't hard down in Zone 5b.  And, you wouldn't be wrong.

But, in a couple of spots, I've successfully overwintered this very sport.  Once in a container that was covered with snow.  And, then again around the Norway Maple tree in front where I transplanted some that survived.  My plan is to water these in while the heat is around.  Then, I'll dig in some Fall-planted bulbs and cover the whole area with mulch.  I'm going to even try to run over to the wood chip pit and grab a couple of buckets to lay on TOP of this Sedum this Winter to give it even more protection.