Yesterday I posted a photo of a new bed on the corner of our back patio that is now home to three transplanted Karl Foerster Feather Reed Grasses.  These were divided from another grass, so....they're the best kind of plants:  free plants.  Today, I'm posting a photo of some other free plants:  another trio of Karl Foerster grasses.   This is the third in the series of dividing these grasses with the first being back i in September.  In that post, I showed how I added just ONE grass underneath our Norway Maple tree in front.

This time, I took another of the driveway grasses (the middle one) and divided it into four pieces.  This one was suffering from Center Rot, so it was due to be divided.  I left the largest piece in place (you can see it in the photo below) and took the other three over by the Maple. 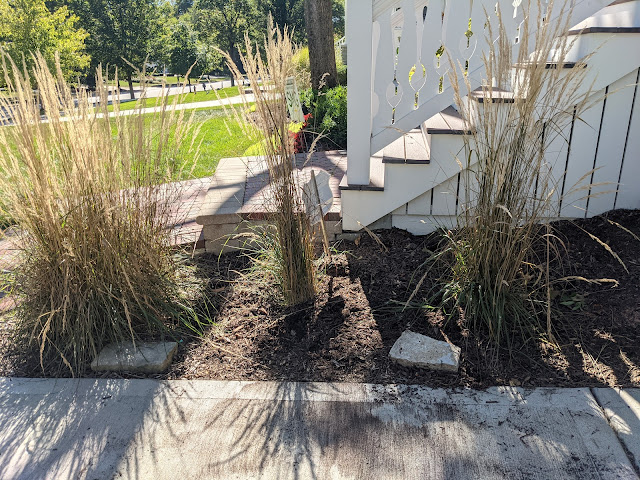 I took the other three divisions and planted them in an array in front of the Norway Maple - along with the first one I put there last week.  Now, there's four of them.  Along with a couple of clumps of lemon coral sedum that I tucked in under the tree.  This area has been very difficult to grow anything due to I believe two problems.  First...the roots of the Maple make it hard to grow as they put down a thin mat of fibrous roots.  But, more recently, I discovered that I have something called Hydrophobic Mulch.  Where the mulch has created a situation where water is not getting through.  More on this specific situation in a separate post.  For now, see the grasses and the sedums below: 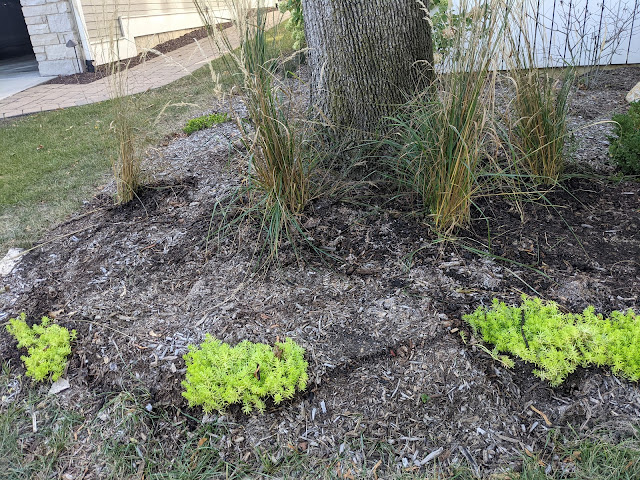 With these three 'free plants', I now have dug up, divided, created and transplanted 12 total 'free plants' - based on dividing four ornamental grasses.  #6 on my 2021 to-do list included transplanting some of our 'foster plants' from Naperville, but it also included dividing some of my existing perennials - like these grasses and the purple Heucheras1 that I divided earlier this year.
Where did I put these 12 'free ornamental grasses'?
1 ib2dw area
1 south side yard by downspout
4 under Maple
3 patio corner in back
3 hops vine area in front of drywell
My plan is to leave one of the driveway grasses as-is for now - kind of hedging against killing ALL of them this Fall.  Then, I have a couple by the screened porch that I'll divide this Spring and create some colonies in the backyard.   I also think that I can add three more in the 'in between two driveways' area - or more.
1. [I don't seem to have posted about dividing this Coral Bell/Heuchera that came from a container, but I should remedy that now.]↩
dividing grasses dividing plants fall dividing feather reed grasses free plants front porch beds front yard garden diary grasses hydrophobic mulch karl foerster norway maple ornamental grasses
Location: Downers Grove, IL, USA