Starting with this post from early March and carried through as #1 on my 2022 priority list was the discussion of shrubs and how I needed to focus on adding them to add depth, structure and the notion of layering to our garden.  Then last week, over the course of a few 'shrub exploration' posts, I tried to organize my thinking via some specific garden bed sections - including the lilac area, a north-side mixed shrub section by the trampoline, the fire pit area and the spot that *could* be the home of a fire pit-area path extension.

Across all of those garden bed 'slices', I was able to create a shrub list that included nine upright evergreens in three different colonies of three each.  Three in the north-side mixed area that would front the transplanted lilas, three in the (current) lilac area that would serve as back layer to a trio of Tardiva Hydrangeas and finally three that would either back three Little Lime Hydrangeas (or perhaps three + 1 to frame the eventual 'path'...).  Each of those three locations have different sunlight situations that really frame up the TYPE of evergreen I'd choose to go in those spots.  From lightest to darkest, they are:   Mixed Northside then Lilacs then path framing - which would be the deepest shade.

I also went around and around with my OWN thoughts regarding arborvitae and thujas and I've recently decided that based on the info you can find online, I'd like to try some of these in our yard.  So, imagine my delight when I made a quick stop at the local big box nursery to find - in a corner amongst all the other arborvitae a  small set of these:  Green Giant Thujas - Thuja standishii x plicata.

Here's the tag showing $60 for a six-seven-foot species: 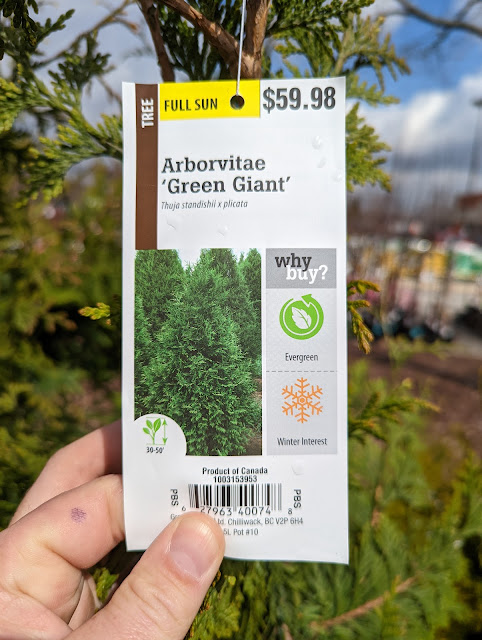 Here's another look at some of them - showing a little bit more 'open' branching than you traditionally find in Arborvitae. 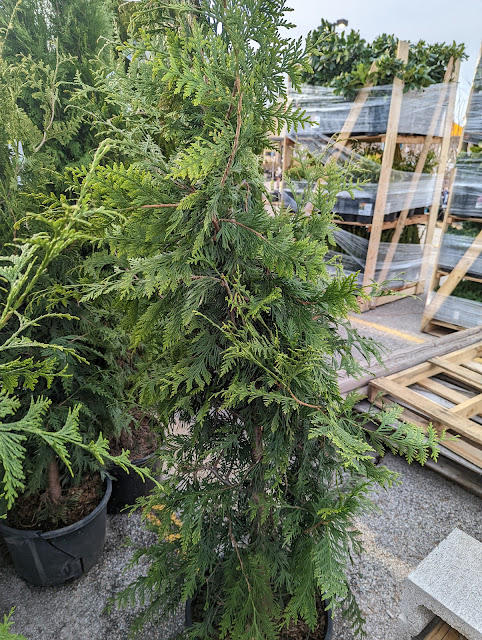 Here (below) are the eight trees tucked into a corner at Home Depot. 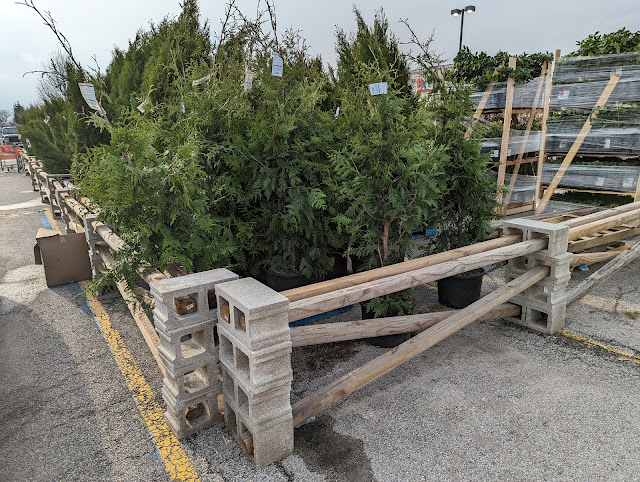 Now....before I buy them, I have to think about where I would put them.  Seems there are two logical locations to start:  Mixed Northside border.  Or Lilac Area.  Both come with pros and cons.

First, the sun:  Here, below, is the Lilac border and the red ovals show the approximate location of where these Green Giant Thujas would be planted.  Note the sun pattern.  This is morning sun and it receives good sun until about mid-day. 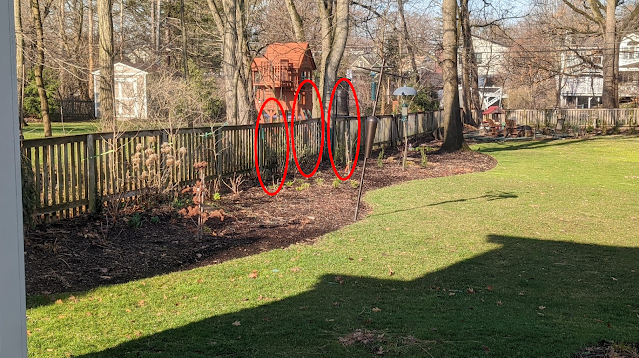 The second spot (mixed Northside) gets even MORE sun than this, so I think they're both in play.

But, what would the - best case scenario - order of operations be to get these put in their forever homes? 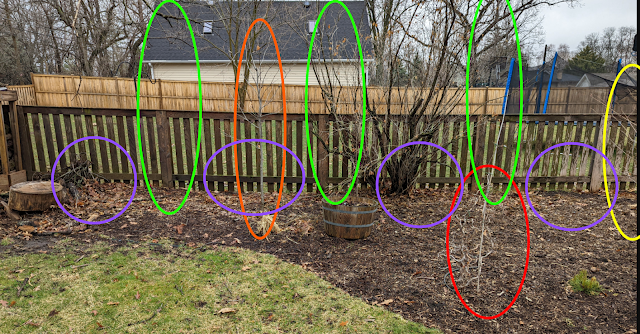 How do we get there?  The steps are below - but this would eliminate four Viburnum from our plan (for now) and replace them with a combo of upright evergreens and transplanted flowering lilacs.
1.  Prune back and/or remove the scrub bush located along the fenceline.
2.  Dig holes and plant the three Green Giant Thujas spaced along the fence.
3.  Dig up and transplant the four lilacs to this area - with the Nocture Lilacs planted to the West and the common Lilac shrubs (which are taller) planted in the two spots further East.
Pros:  By planting the Thuja FIRST, it is working in a logical way.  This also allows this 'section' to be in an ALMOST 'final' form - evergreen layer + flowering shrub layer + existing trees.  Finally, this allows for the immediate relocation of the Lilacs - which 'frees-up' that area for another planting of upright evergreens.
Cons:  This area isn't easily visible from the house and patio - so the 'impact' will be minimal for the casual visitor who doesn't wander back.
Now.....What about the Lilac area?
Those steps seem to be:
1. Dig up and transplant the four existing lilac shrubs. (note: these would need to be planted in a way that would ALLOW for the planting of an evergreen *behind* them at a later date).
2.  Dig up and transplant two or three Hicks Yews - likely to the fire pit border.
3.  Dig up and move three Lungwort out closer to border edge - leaving room for Tardiva Hydrageas between evergreen layer (Thujas) and the front of the border.
4.  Dig up and move a few of the Summer Beauty Alliums.
5.  Plant the trio of Green Giant Thujas against the fenceline.
Pros:  Is way closer to the patio and the planting of a mass of three evergreen trees would provide an immediate impact to the view.  I would get the immediate addition of some Yews to the firepit area and the relocation of the Lungwort and Alliums would aid in getting this 'slice' into final form.
Cons:  Requires the buying of the 3 Tardiva Hydrangea to 'compete' this 'slice'.  And, if done in isolation, would leave the planting of the Lilacs - in terms of positions - kind of up in the air due to the upright evergreen layer not being installed first.
So, what's the right answer?  It seems the *best* answer is to buy SIX of them and do BOTH plantings.
But, thinking about buying just half of the needed set, where do I put the first three?
My head tells me the Mixed Northside Bed because of the logical way of planting from the back.
My heart tells me the Lilac area because it will have more of a visual impact from the house and patio.
Also....Do I wait for the inevitable sale?  Or, do I just buy them now - before they are sold - and (potentially) go in for a price adjust when/if that happens?
What will win out?  I'm not sure.  But, something *will* happen this week.
2022 growing season 2022 to-do list arborvitae backyard planning evergreen shrubs landscape priority lilac planting trees shrubs tardiva hydrangea thujas upright evergreens
Location: Downers Grove, IL, USA