Having locked-in my 2022 priorities for the yard and garden last week, I have begun to think about the practical implementation of the first item on the list:  Shrubs.  A discussion of some of the shrub needs were walked thru earlier in March in this post that laid out a list of needs and included a reference to adding three Tardiva Hydrangeas.  Back in 2017, I included a look at that part of the beds that called for these Tardiva Hydrangeas here.

With all that background out of the way, I think it is useful to look at the current conditions of this portion of the bed AND my current thinking in terms of deciduous shrubs based on some pointers from others.   To be sure, this is NOT a 'clean slate' situation.  I've planted things there that NEED to be relocated.

First, I have four Lilac shrubs planted along the fenceline.  Two common Lilacs (planted in 2018) and two Nocture Lilacs (planted in 2019).  NONE of these have worked here.  They haven't died.  But, they have NEVER shown any indication of wanting to bloom.  My hunch is the shade isn't working for them.   They need to go.  Where do I move them?  There are a few spots to consider:  other side of the yard where I was planning some of the Viburnums, on the south side of the house by the Disneyland Roses or all the way in the back - where there's even deeper shade, but can maybe use as a landing spot (for now).  There's a way to maybe split the difference and put two in one spot (Viburnum replacements) and two in another (sideyard).  If you look back at this post from 2019 when I was planting the Nocture Lilacs, you can see that I also (at one point) had a Dwarf Alberta Spruce close, but that one died.  I always liked the look of that tree, so maybe that's something I should revisit this season. 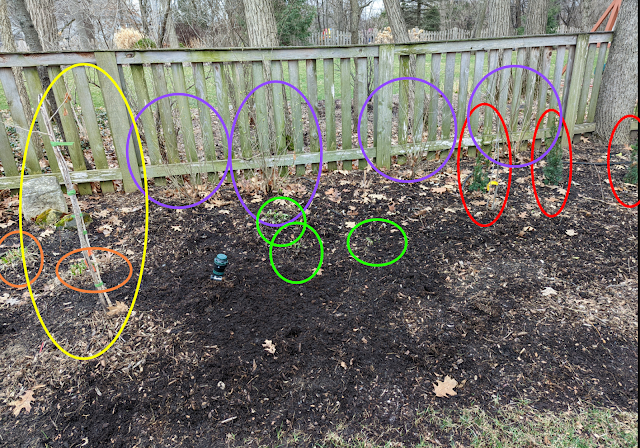 As a reminder....here's another peek at the original plan below that shows three Tardiva Hydrangea against the fence.  Note the tree *in* the fenceline in the photo above and in the sketch below.  The location of the four Lilacs is *the* location for these Tardiva Hydrangeas. 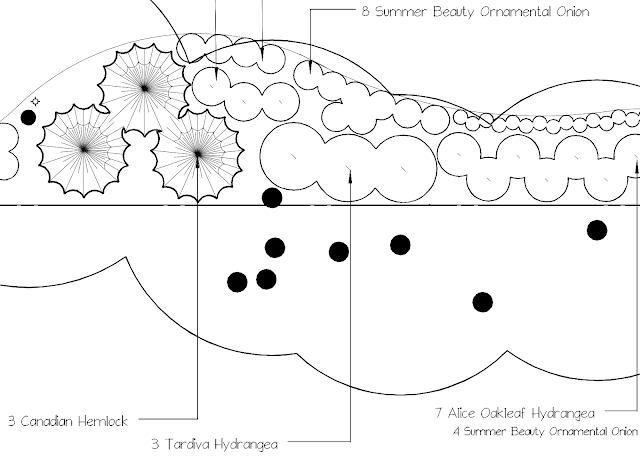 First, let's talk about transplanting:  As mentioned, the Lilacs need to go.  But, so too do the Lungwort.  Those will move all the way OUT to the front of the bed.  Two of the Hicks Yews need to go, too.  Back by the firepit area is the most likely landing spot.  The rest will remain (Allium, Ginko).
A note about the depth of the bed here:  We've made this bed slightly larger than called for in the drawing.  Why?   Because of the guidance that I've picked up on from Amy at Pretty Purple Door about how to dress up your deciduous shrubs with evergreens BEHIND them.  I've started to do that by placing some Yews *behind* other Hydrangeas, but this area provides the opportunity to do much the same behind these new Tardiva Hydrangeas.

Another thing that is playing out in my head is that while we have some space, we don't have ENDLESS space, so finding columnar species continues to be a priority for me - especially in this new, evergreen 'layer' in the back.  Hicks Yews are columnar.  But, are there OTHER conifers that take on a columnar or upright form that might work in this spot?

I've stayed away from Arborvitae and/or Thujas in my current yard.  And, that's mostly because they're SOOO common.  Everyone has a row of them, so I'm not drawn to them.  But....why does everyone have them?  Because they work.  They grow upright.  Are priced fairly (for the most part).  Provide screening.  Are evergreen and provide winter interest.  That means they warrant a second look, right?

My neighbor Matt planted a row of Green Giant Thujas a few years back and they've shot WAY up.  Incredible growth.  I know, I know...fast-growing trees are (typically) not that long lasting.  But, could Green Giant Thujas be the right move here?

The problem I've had with the Lilacs is that they REALLY want full sun.  But, what about Green Giant Thujas?  The info is mixed on the Web, but you can find places that will tell you that they'll tolerate some light shade.    The Lilac area is two fence panels wide.  That's 18 feet of span.  Planting these Green Giant Thujas/Arborvitae with 2.5' of spacing on each end and 4' of space in between and about 2.5' from the fence would allow for the 'evergreen layer'.   Back in Elmhurst, I planted some of these closer to the fence and they seemed fine.   In front of these three Thujas would go the three Tardiva Hydrangeas.  See below:  Teal = Thujas.  Yellow = Tardiva Hydrangea.  Green = transplanted Lungwort to the front of the bed.  Red = Remaining Hicks Yew.  Orange = Remaining Allium. 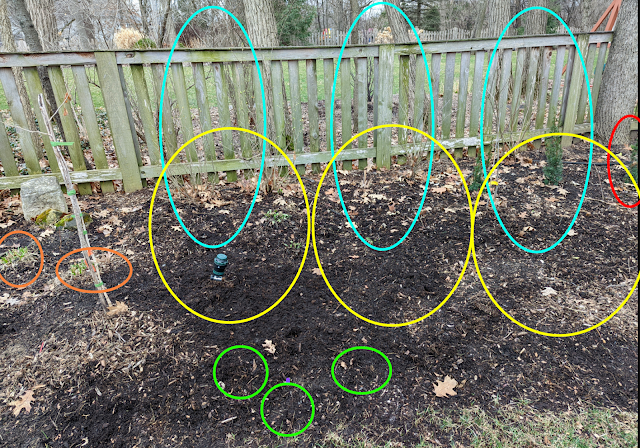 I haven't read up much on Tardiva Hydrangeas, but I really like that they're both more 'upright' and.... late bloomers - paying off one of my *other* 2022 priorities:  four season planting.  From Fine Gardening:

‘Tardiva’ is a late-flowering (early to late autumn) cultivar with loosely-packed, sharply pointed white flower heads that turn purplish-pink with age. It is a vigorous, fast growing deciduous shrub that reaches 8 to 12 feet tall. This is one of the most cold-hardy species. It may be grown as a single-stemmed specimen or as a multi-stemmed shrub.

Feels like there's more of a firm plan here having done this exploration.  My original "Shrubs Plan" may see an alteration by transplanting the lilacs as Viburnum replacements.   I could use upright Yews here - or Green Giant Thujas.  I'll price compare those two this season.  I need to remind myself that if I'm paying $70 for a taller Arborvitae, I should look at what at that same value runs in a Yew.  Certainly...it would be MUCH taller than the $5 ones I've bought.

On my 2022 shopping list for this Lilac Replacement Area:  Three of one evergreen plus three of Tardiva Hydrangea that (see below), I've come across at Hinsdale Nursery.  Getting these six shrubs in will transform this segment of the south side bed.  Just to the West of this area is ANOTHER spot that calls for a mix of hydrangeas and evergreens.  That, will be posted in the next few days. 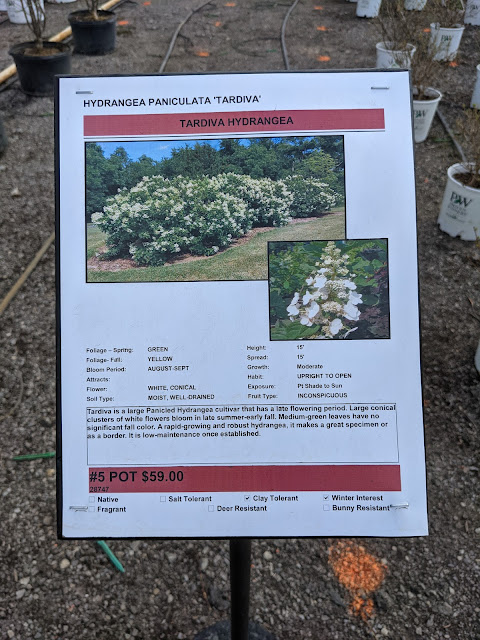