Side of the Garage in Shade - Dogwood Espalier - April 2022

Posted by Jake Parrillo on April 21, 2022
I've talked about how our yard, beds and even view of our house from the street has changed since we moved in back in 2017.  At that time, we had a house next door (to the north) that was sitting closer (than our house setback-wise) to the street and had a driveway that wasn't right on the property line.  With our new neighbors building and moving in a couple of years back, that changed.  They upgraded the property and house in a MASSIVE way.  And...they're just good neighbors and nice people.  But, they did upgrade the property in so many ways.  In doing so, they built their new house a bit further back from where the old, smaller house was situated.
As a result, that 'view from the street' that I mentioned changed a little bit.  It changed when you are coming south on our street/sidewalk and 'see' our house.  What used to be hidden (mostly) due to landscaping and the old house was the side of our garage.  It is a big, mass of wall with no windows.
Here, below, is what it looks like: 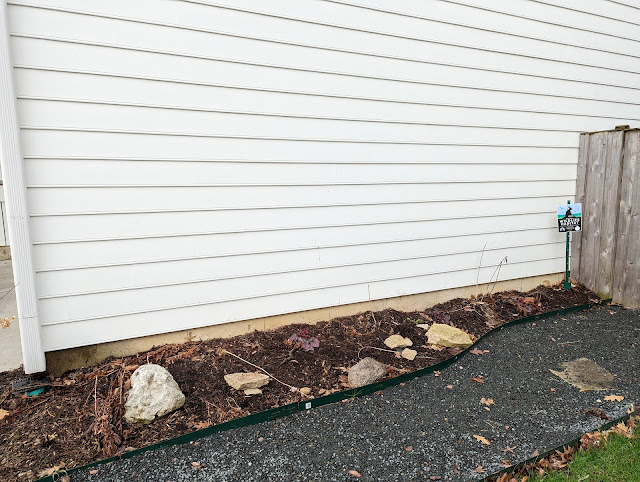 That gravel path (Bluestone chips) is the one that connects our driveway (front yard) to the back and there's a little bit of the fence/gate in the far right of the photo.  From that fence to the downspout is all wall.  This is north facing.  I've planted a few things here - mostly just to fill some of the space in the bed:  hostas, ferns, Heucheras.

But, with this new (I say "new", but it has been a couple of years) view being exposed, I've been thinking about how to dress up that wall a bit.  What REALLY stimulated this was when I brought home the six Green Giant Thujas.  When I got them out of the van, I placed them over on the side path just as a way-station between the driveway and the backyard.  I left them there for a few days.  But, when I 'glanced' at the area, I liked how they added some vertical interest and covered some of the big, white wall.

This area - the front-of-fence part of the backyard 'entrance' has been something I've thought about since as early as 2018.  I wrote this post about how I might consider using Holly - a columnar/upright cultivar called "Sky Pencil" as a potential screen.  I included this little snippet of our plan and annotated it to show the location between the path and the property line - that you can see below: 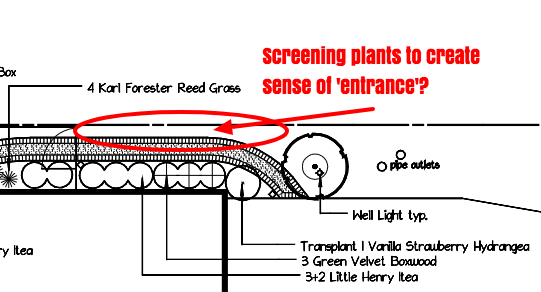 I also shot a photo of this section and talked about espalier trees back in October of 2018.

So, as far back as Fall of 2018, I've been thinking that maybe something BESIDES shrubs could work there to provide that sense of 'entrance' and a little bit of privacy.  I can't NOT think about what to espalier over there, but since it is pretty deep shade (a little morning sun on the East end), I haven't made any moves.

The most logical answer that I have found - after digging around for [Best espalier trees for shade] was to consider some Dogwood trees.  I have one TINY Dogwood that I bought from a Native tree sale in Glen Ellyn last year - a Pagoda Dogwood.  But, I've come across dozens at the Big Box nurseries of the years.  Florida vs Kousa.  I wasn't in love with any of them - either the specific sport didn't speak to me or the price was what I considered 'too much'.

But, that might have changed this week.  Why?  Because I found this new (to me) tree below.  It is a Cherokee Chief Flowering Dogwood.  It is Cornus florida and as you can see from the tag (below) it is listed for "Part Sun". 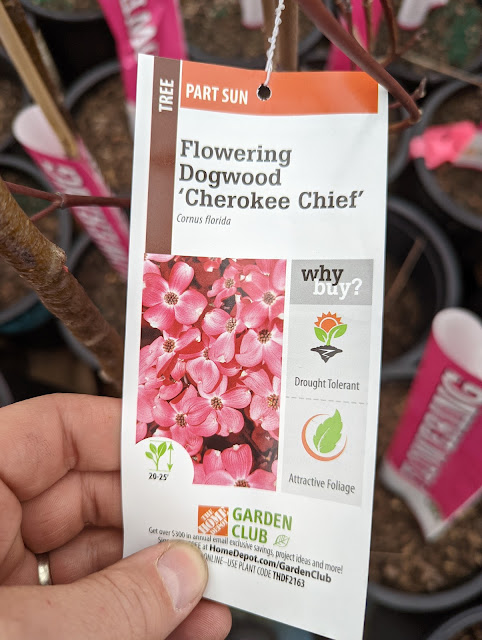 Might this be part of my solution to both the privacy/entrance issue AND/OR the big, massive white wall?

Last Fall, I added a pair of SugarTyme Crabapple trees to the south-facing wall of our house that presented a similar situation.  That, however, is in Full Sun.  My plan is to espalier those trees - perhaps in another horizontal Cordon...or something more interesting - as they grow.  I just peek'd at them and they're beginning to leaf out, so I'll begin training them this Spring.

Could I do the same with these dogwoods?  The Cherokee Chief sure is a striking red flower, isn't it?

There are a couple of possibilities - plant one or two trees against the house.  And call it a day.

Or, plant a tree or two against the house AND along the property line to form a sort-of 'tunnel'.

With Earth Day coming tomorrow, it seems like this is a good tree-planting project.  But, I still have to decide how MANY trees:  one, two, three or four.

One = against the house.

Two = against the house.

Three = One in one spot, two in other.