If you ask ten people who lived on the northside of Chicago what their favorite pizza from that time in their life was, I'd bet that 8 of them will tell you one place:  Pequod's.  It is a place that serves a distinct version of Chicago Deep Dish that features what they call a "caramelized crust".  What it really is a well-done whole milk mozzarella edge.  Not quite a frico, but more an 'edge'.

Is it my favorite?  No.  But, I'm a thin-crust-always-kinda-guy.  We've been to Pequod's.  Both the city location, but also the original up in Morton Grove.  Here's my post from a visit there in 2015.  And here is our first visit to the suburban location (the original started here by Burt Katz) in 2011.  Also note...we did eventually make it to Burt's Place before Burt Katz passed away.

But, back to Pequod's and why I bring it up.  One of our neighbor's requested a Pequod's-style pizza recently.  I haven't made deep dish pizza in a number of years.  I've made Detroit-style (which is close), but not a true deep dish.  So, I went out on the Web to find a dupe or clone recipe.  And sure, enough, this guy at RealDeepDish.com has a recipe clone for Pequod's.

I gave a it a shot and threw the dough in my 12"x1.5" Bar Pie Pan from Lloyd's Pans (the stacking kind) and followed the directions.  How'd it turn out?  Pretty good.  Was it perfect?  No.  But, I nailed the 'edge'.  See below for a photo of said edge. 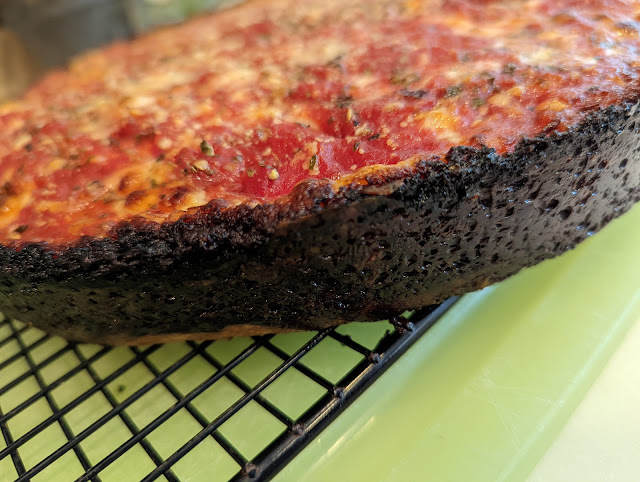 This was for a party, so I didn't dress it at all - just the base chassis of cheese.  For the mix, I did my usual approach:  hydrate the flour with oil and water.  Mix.  Add yeast.  Mix.  Add salt.  Mix.  For 2 min on low, 2 min on high.  Followed by a series of stretch-and-folds.  After that....I did a 48 hour cold ferment in the fridge and then allowed the dough ball to rise in the pan (covered) on the counter for about 3 hours.  That's not exactly what the recipe calls for process-wise, but I'll be sticking to my program.

So, this was a mixed bag.  What, exactly, does that mean?  Well....(for me), this "quod" recipe has too much dough.  The dough-to-cheese-to-sauce ratio was too dough-heavy.  Which...manifested itself with a 'too thick' of bed of dough.   Look at this photo I took of Burt's pizza back in 2011 which shows how thin the base was/is back then.

What comes next?  The "quod" clone calls for a formulation of a 511 gram dough ball.  (Well...it calls for a 516 gram dough ball, but that includes 3 grams of black pepper and 2 grams of sugar which I'm not using).  That seems like it needs to shrink by 20% or so to get what I'm after - which would be about a 410 gram dough ball.  Here's what I'm going to try next time:  reduced(ish).  (why 'ish'?  Because I rounded things up to whole numbers and kept the salt high.) 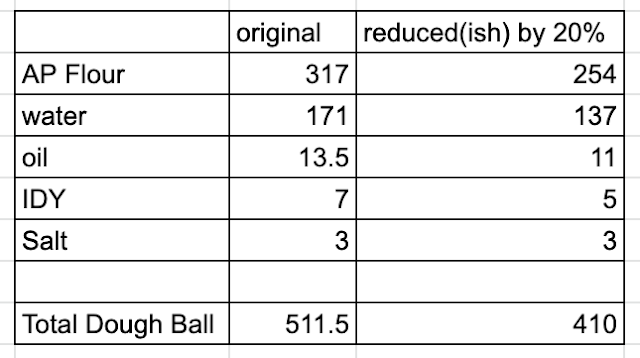 I'll also pile on some fennel sausage to try to suppress that oven-spring and that too-thick dough layer.

Winter is coming and Nat loves Deep Dish, so I'm sure this experiment will continue.  Tis' the season.